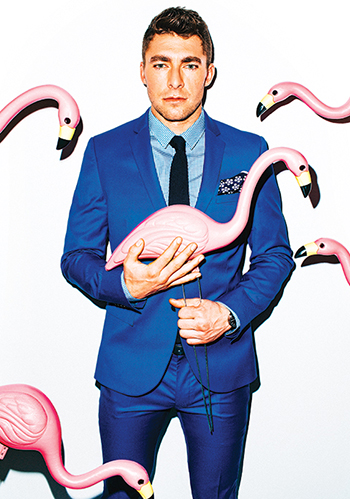 Joffrey Lupul says he’ll pass on this season’s halter tops from J.W. Anderson and the reverse-cleavage tops from Astrid Andersen, but, other than that, he’s game to test his style limits. The 30-year-old Toronto Maple Leafs forward says he likes to look sharp—even in a sport that discourages its players from flashy, NBA-like sartorial displays. “I want to be as creative as possible, but I have to do it in a way where it’s still hockey first,” explains Lupul. “You certainly don’t want to alienate yourself from your teammates.” Here’s this former Alberta boy’s top five fashion and grooming power plays.

1. Keep an eye on Henrik Lundqvist. “Hank’s a super-fashionable guy. I’ve never seen him dressed down.”

2. People-watch. “You can talk about ‘personal style,’ but everyone, in a way, is emulating someone else they see, whether it’s on TV or on the street. Even if it’s subconsciously, you’re picking up on something you see that looks cool.”

3. Make friends with your tailor. “I have a cool partnership with Gotstyle. We put together a suit for every home game that people can vote on.” [Go to lupulstyle.com and rate his look, from 1 to 4 pucks. For every vote, Gotstyle and Lupe’s Troops will donate $1 to the True Patriot Love Foundation.]

4. Say no to the mullet. “I was going to say that Ryan Smyth had the worst mullet in NHL history, but then I remembered what [Jaromír] Jágr had going for a couple of years. That was special.”

5. Have a signature cologne. “The one I’ve had for the longest is Salvatore Ferragamo Acqua Essenziale. That one always stays in the kit.”