Chatting with Jeremy Scott about working with H&M and how he stays creative. Hint: It involves SoulCycle. 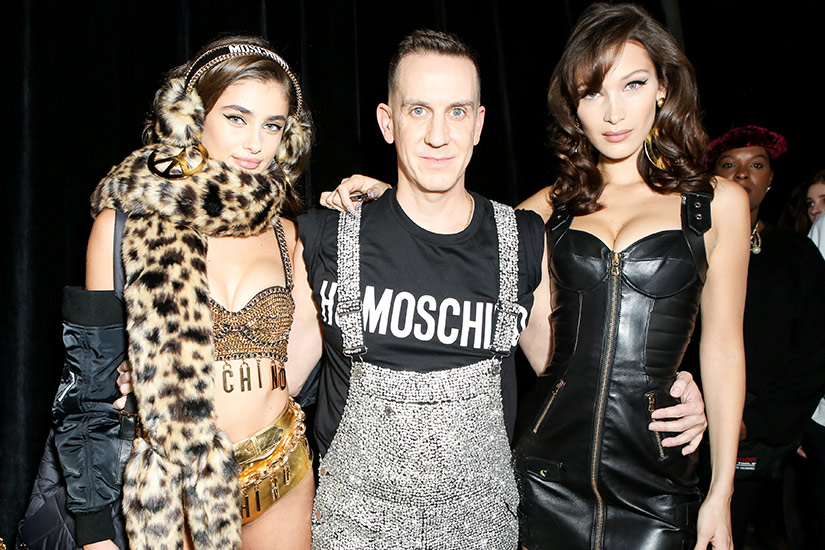 Jeremy Scott has a spiritedness about him that you could only assume was a result of growing up in an urban city like New York or L.A. — living a fast-paced life just like that of the customers he designs for today as Creative Director for Moschino. But Scott is actually a Kansas City native who grew up on a farm and television was his only lifeline to the eccentric world of fashion. “Through television was how I saw fashion and House of Style of course was epic. Because there wasn’t the internet, you can only imagine that you would only get information through something like television,” says Jeremy Scott to a host of international editors and influencers seated in a theatre at Public Arts New York. “So when we were working on how to approach H&M and Moschino, it had to work globally, which is something I learned either has to get translated to every language for every market or be something visually universal,” he said. With the HMoschino collection currently available worldwide, we all have access to the urban fun fair that he’s created. Here’s what else the designer had to say about the process of collaboration and how he stays creative.

“What makes a great collaboration is having mutual respect and both parties doing something exceptional on their own right and coming together to make something together that’s equally exceptional. So for me, H&M has done an exceptional job at making clothes that are at accessible price points and also with a quality level that is remarkable. So for them to be able to use their magic, techniques and know-how as well as their large distribution to help make price points go down, and for me to be able to bring my vision so purely to them, it’s been a dream come true.”

ON HIS CAMPAIGN CASTING

“I really wanted to shine a light on people I love, the friends that are in my life, people that inspire me and people that I wanted you to know more about.”

The HMoschino collection is the designer’s latest collaboration.  Image by: Moschino x H&M

“My goal was to not dilute at all the image – this is a gift for my fans – I wanted them to have it as pure and direct as they would any other collection that I do throughout the year so to me it was like my seventh collection this year. Ann-Sofie Johansson (Creative Advisor at H&M) and her whole team has been so wonderfully supportive. They’ve just been so generous with their spirit of bringing my vision to life and captured every last bit from the clothes, to working on the campaign and imagery to the show. They’ve just been such wonderful supportive partners, I couldn’t be more blessed.”

“I just keep myself open to the universe, to have divine inspiration happen. So much creativity comes from conversations – from the colour of a glass or a car that drives by or a picture – there are so many different things I’ve luckily never had a drought. I try to stay stable with my SoulCycle three times a week when I’m home in L.A. I have a pretty simple life and I’m actually kind of a hermit. I just like to watch The Daily Show before I go to bed. I have my other programs that I like to watch, American Horror Story right now, Empire and RuPaul’s Drag Race is back again.”

ON HIS FANTASY SPIN CLASS

“Jay-Z, Beyoncé, Big Sean, Usher and Ciara. But I couldn’t curate anything better than what my instructor (Angela Manuel-Davis, who also appeared in the HMoschino lookbook) class already is, honestly.”