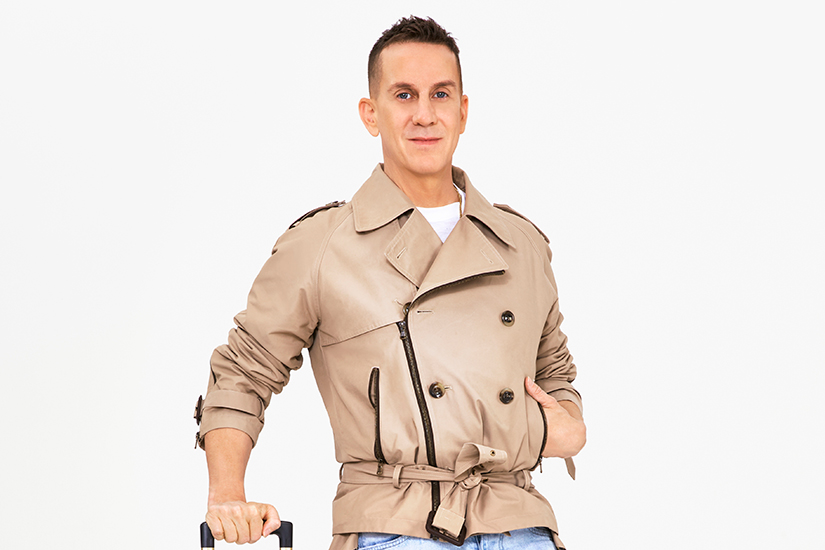 When London Fog reached out to Jeremy Scott about a potential collaboration, the designer’s first reaction was surprise. “It was just so unexpected to me because I think of them as such an American legacy brand that’s very classic,” he tells us. The nearly century-old company began with making waterproof coats for the U.S. Navy during the Second World War and have since become known for their tailored and functional design, a seemingly stark contrast to Scott’s bold pop culture-infused looks. However, it was more of a nostalgic reunion—the designer had grown up wearing London Fog and jumped at the chance to leave his own mark on the brand.

The resulting capsule collection—now available in Canada at Hudson’s Bay—combines the best of both worlds, merging London Fog’s time-honoured outerwear with the Moschino creative director’s signature playful aesthetic—like his take on the brand’s iconic trench coat, which was reimagined with a biker jacket-inspired silhouette, zipper detailing and eye-catching leopard print lining. “I just started thinking about the things that I like—very selfishly thinking about things that I’d want to wear,” he says. Accessories like a hatbox handbag, leather-trimmed bucket hat and a suitcase in matching prints round out the capsule.

We caught up with the designer while he was in Toronto to talk about the partnership, the TV show he can’t live without and where he goes for some R and R.

ON THE RECIPE FOR THE PERFECT COLLABORATION

“First of all, I have to love the brand, I have to understand the DNA and I have to have something that connects me to it. I grew up with London Fog. We all got London Fog coats when we were going to school and it was just a sign of excellence when I was growing up.”

ON THE HAPPIEST PIECE IN HIS WARDROBE

“My necklaces. One is my nameplate and the other is my grill so they’re just very personal. Magically, I’ve been able to not lose them…even though I lost them in my own closet for about eight months until I finally found them.”

ON HIS POP CULTURE PICKS

“My favourite TV show is RuPaul’s Drag Race—it’s something I can never miss. I also love The Daily Show with Trevor Noah. It’s always great to be able to digest something serious with a little something funny. I’ve had to do more podcasting with traveling than having books with me. My favourite is You Must Remember This. It’s about old Hollywood and she debunks a lot of stories.”

ON HIS GO-TO VACAY SPOT

“I’m going to Hawaii next. Living in LA, it’s such a close destination and I find it beautiful. It’s my favourite place to go. Maui’s the best, and Honolulu is also great. Hawaii is tiny, but there are a lot of little places.”