Is this season's oversized trend silly or subversive?

Clara young explores the story behind the controversial style. 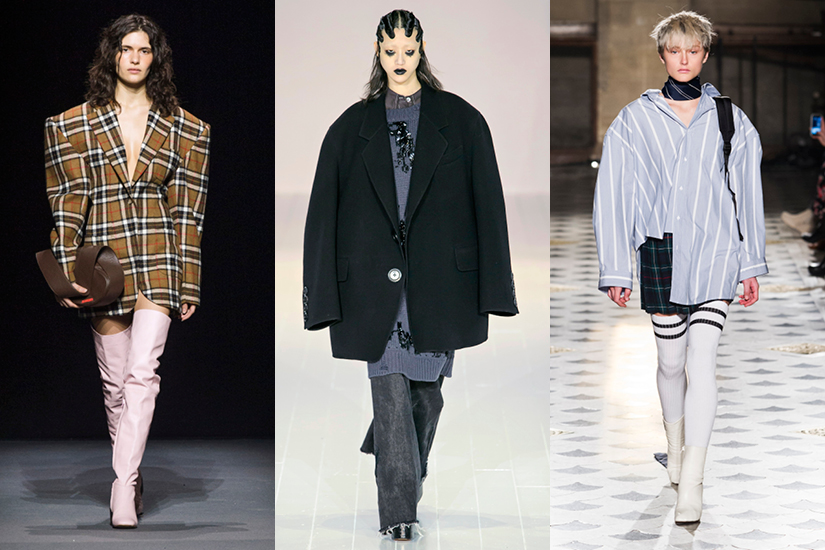 Oversized fashion comes in many shapes and forms. The most crowd-pleasing iteration is the boyfriend jacket or boyfriend shirt, which has become a popular item in today’s sartorial vernacular despite the fact that the man-size item creates a little-girl effect when worn by women. There is nothing belittling, however, about this season’s take on oversized clothing. Fall/winter 2016 collections have been cut and tailored so big as to be absurdist. Buttressed shoulders jut out well beyond the shoulder blades at Vetements and Jacquemus. A complement to this NFL-linebacker look is the one-button hobo coat at Marc Jacobs with extra-large shoulders sloping into sleeves that slump past the fingertips. At Céline, trousers as wide as the sea and as long as the day pool around the shoes. They make the short, skinny shrunkenness at Saint Laurent and Louis Vuitton look ungenerous.

“The overall outline is larger,” says Valerie Steele, director of The Museum at the Fashion Institute of Technology in New York. “The body is taking up more room. It’s an assertion of presence and subjectivity.” That’s an academic way of saying that these are big clothes people will give a wide berth to. No one is going to get cuddly with Mildred Pierce shoulders, the padded behemoths Joan Crawford wore in the 1945 film of the same name. It’s an aggressive silhouette that goes with the prickly self-protectiveness of dominant fall trends. The glossy-hard patent leathers at Hood By Air and leather motorbike outfits at Chloé project the same message: “Watch out.”

One can read other subtexts into the oversized trend: Big clothes are comfy, therefore not suffering for fashion is feminist-minded; big clothes obscure sex by continuing the androgynous trend; and big clothes are sexually reticent, which puts them into the political arena of modest fashion and the preferences of conservative religious communities. But politics of size aside, the pumped-up volume draws more attention to the clothing itself. It’s not just there to cover the body or glorify it; it’s there to stand out independently of it. “I’ve always loved oversized,” says Lutz Huelle, a designer who worked for Martin Margiela before starting his eponymous label in 2000. His dropped-shoulder, extra-long-sleeved dresses this season are true to his aesthetic while hitting the trend dead centre. “I’ve always dressed people who do not have an ideal of the perfect body. Oversized clothing moves on the body in a different way. It has a life of its own.”

The new big is not an indiscriminate muumuu. These are not big drafty tents to wallow around in but intriguingly contradictory garments. “Really tailored clothes tend to be fitted to the body whereas other shapes, like those resembling the letter T, loosely hang around the body,” says Steele. “These follow more of an Eastern tradition, like ottoman robes and Japanese kimonos. Altering the shape [of a garment] is one way to create a shock of the new.” Maxwell Osborne and Dao-Yi Chow, who have borrowed from the androgynous designs they are known for at Public School to create an updated aesthetic at DKNY, agree that the message is in the shape. “It’s more about creating tension with the fit,” they explain. “The extra volume helps to create more room both figuratively and literally.” The disconnect between body and tailoring is jarring this season, but the look isn’t brand new. Comme des Garçons showed XXL jackets in fall/winter 2014, and Margiela did oversized in 2000. Also, recall the ridiculously large grey suit David Byrne wore in the 1984 film Stop Making Sense. “I wanted my head to appear smaller,” Byrne once said in an interview, “and the easiest way to do that was to make my body bigger.” In the movie, Byrne’s suit grows with each successive song, just as Mildred Pierce’s shoulder pads inflate with each step up the corporate ladder. The suit becomes a caricature and takes on a satirical life of its own.

Byrne’s big box suit inspired the one Simon Porte Jacquemus designed last year for a music video. French singer Héloïse Letissier—whose stage name is Christine and the Queens—wore a powder-pink pantsuit that slowly spread out like toothpaste from a tube as the song “Paradis Perdu” went on. The pink suit was a forerunner of the season’s SpongeBob-shaped suits Jacquemus sent down the runway for fall/winter 2016. “In this collection, I wanted to make flat clothes that were wearable,” says the designer. Some of his huge-shouldered suits come cinched at the waist, while others are phony box suits. These trompe l’oeil suit jackets have square, pinstriped facades—like a sandwich board or cape—that are, nonetheless, “normal” in the back with hidden jacket sleeves. They give the illusion of a box without the encumbrance. “They’re square, but you’re not wearing a square cage,” says Jacquemus.

Grand box suits are more than mere clothes to cover the body; they are a statement. The superfluity of their size makes them even akin to sculpture. A little like artist Joseph Beuys’ 1970 felt suits, which were conceived not to be worn, the very big suit has art pretensions because it is hard to wear. Or, perhaps art’s too grandiose a claim. Oversized may simply be a matter of taste one would do well not to overanalyze. “Our silhouette is very [inspired] by men’s clothing, so I’ve always liked to make women’s clothing with enormous trousers and big suits,” says Jacquemus. “I don’t know why.”