Is fashion walking away from the stiletto?

Exploring whether the era of the high heel is over—for good. 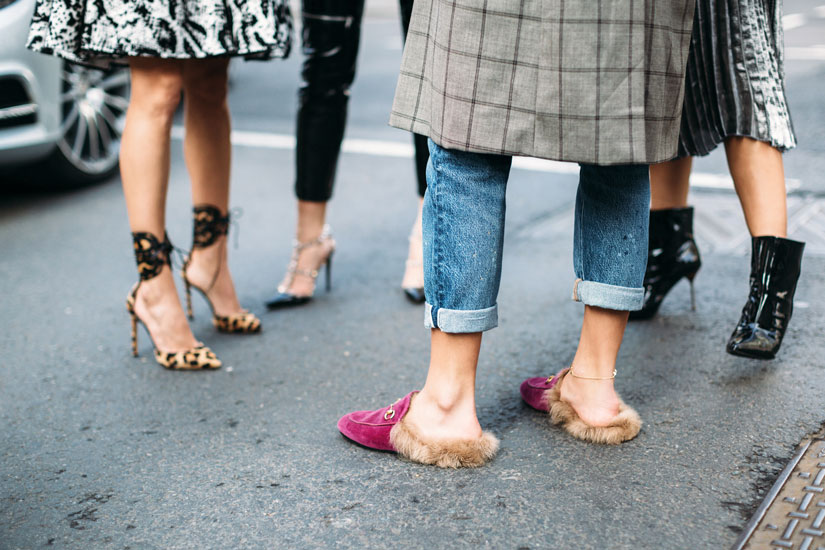 There’s a scene in the 1984 treasure-hunt flick Romancing the Stone in which Michael Douglas, who plays a rough-and-tumble adventurer, and Kathleen Turner, an out-of-her-element romance novelist searching for her kidnapped sister, are running through the Colombian jungle. Douglas takes Turner’s mud-covered taupe pumps and chops off the heels with a machete. “These were Italian,” says Turner as she holds up her new flats. “Now they’re practical,” counters Douglas.

I’ve loved this exchange since childhood, but lately it has made me wonder: Are we putting our own heels on the proverbial chopping block? My taste in shoes has certainly evolved over the past year. I no longer consider my pair of gilded five-inch Nicholas Kirkwoods my most prized shoe possession. Instead I’m dreaming of a pair of quirky shoes by Korean design house Yuul Yie, whose inverted-block-heel designs are far from vertiginous. The Holy Heel Trinity—Blahnik, Choo and Louboutin—once occupied footwear’s most desirable tier with their extravagant designs. Now, new brands like Gray Matters, Maryan Nassir Zadeh and Mansur Gavriel are shaking up the market with their minimal, low-to-the-ground styles. In The Devil Wears Prada, Anne Hathaway’s transformation from mousy outsider to chic protege begins the moment she accepts a pair of sky-high Jimmy Choos. Today, her character might opt for Gucci’s backless loafers, which were the second-most-sought-after item on fashion search engine Lyst in 2016. (The first? Sneakers.) And at the last cocktail party I attended, I spotted a woman in flat studded Alexander Wang slides. She looked confident, sure-footed and hardly underdressed.

Sidney Morgan-Petro, a retail editor at trend forecasting firm World Global Style Network, confirms my hunch: “Looking as far ahead as 2019, high heels are not part of the main fashion story.” Morgan-Petro credits everything from the dominance of athleisure to the continued influence of the ’80s—an era of kitten heels and sturdy pumps—with the stiletto’s decline. Still, she predicts that high heels will continue to have a place in occasionwear. “Everyday life has become so casual that the focus on getting dressed up with a heel will actually increase,” she says. However, practicality will rule—for day and night. “The heel trends we’re seeing are much more comfort focused,” she says, pointing out Gucci’s ballroom-dance-inspired shoes from the Resort 2018 collection. (The shoes’ purpose is to be danced in, making function and flexibility key.) Morgan-Petro also considers the influence the current political climate has had on our shoe choices. “The fresh wave of feminism has been really impactful on retail,” she says. “The erosion of gender stereotypes, seeing ‘The Future Is Female’ on a shirt—that’s going to make it hard for the stiletto to re-enter the market-place.” After all, who wants to march in Manolos?

It’s not the first time ditching heels has been a metaphor for liberation. According to Elizabeth Semmelhack, historian and senior curator at the Bata Shoe Museum in Toronto, the relationship between heels and traditional notions of femininity dates back to the 17th century, when daintiness was a woman’s greatest asset. Impractical shoes are so tied to the male gaze that the earliest examples of erotica from the 1850s depicted women dressed in nothing but—you guessed it—heels. “The heel became a signal of desirability, sexual manipulation and irrationality—so much so that it was largely abandoned in the late 19th century, when women began demanding the right to vote,” argues Semmelhack.

Fashion is nothing if not cyclical. Skip ahead about a hundred years and Christian Louboutin introduced his now-iconic “Pigalle” pump—an irrational shoe if ever there was one. The blade-thin high heel measures at just under five inches and offers glossy red-soled glamour at the price of foot-numbing pain. (The shoe’s toe box is made extra-narrow for the appearance of an ultra-high arch.) Monsieur Louboutin was well aware of this trade-off. In 2011, he told The New Yorker that he hated the word “comfy.” Ouch.

It took Céline’s Phoebe Philo to get us to come down from those perilous heights. Philo rocked the fashion world when she introduced the infamous furry Birkenstocks on the spring/summer 2013 runway. The fluffy, flat shoes were widely derided by the public when they first walked at Paris Fashion Week. Now, pairs similar to the “furkenstocks” are everywhere, from indie shoe brand Brother Vellies to Rihanna’s sold-out Fenty Puma slides.

Philo also influenced our shoe choices with her own style. When the designer took a runway bow in pristine Stan Smiths in 2011, she caused a collective sneaker fever. Even Victoria Beckham, whose love of towering footwear is as well documented as her aversion to smiling, traded in her platform Louboutins for white kicks, telling The Telegraph in 2016, “I just can’t do heels anymore.”

Other designers have followed in Philo’s steps. “The fact that heels hurt was never taken seriously,” says model and shoe designer Mari Giudicelli, whose line of retro-cool mules barely rise above an inch. “My routine involves a lot of walking, subways and bike rides, so heels don’t make sense to me,” she says, adding that sometimes she even sacrifices her designs for the sake of comfort. Giudicelli’s ethos is similar to fellow New York designer Rachel Comey, whose shoes are meant to help women “run around the city without falling through the cracks.”

But not every woman finds flat shoes empowering. Dolly Singh, who spent six years as the head of recruiting at Elon Musk’s rocket-ship company SpaceX, loves how powerful stilettos make her feel. “When I walk into a meeting, I feel more in charge,” she says. “I draw energy from my shoes, and that’s going to dictate how the meeting goes.” Three years ago, Singh tapped into her network of top engineers to develop a truly comfortable high heel. The result is Thesis Couture, a label that combines Italian-made luxury with Silicon Valley science and uses the principles behind prosthetic-limb design and aerospace engineering. “We’re conditioned to believe that beauty is going to hurt us; I think people are starting to see through that facade,” says Singh, who is producing her line in limited runs as she builds the brand and pushes for innovation. Singh plans to sell the first generation of the soon-to-be-patented design to luxury footwear brands. “Technology has impacted every industry on the face of the planet, and fashion has been really far behind,” she muses, “but there will always be a place for the spiky stiletto.”

Time will ultimately tell us whether we’re living through a fundamental shift in footwear trends or if we’re simply at one end of fashion’s swinging pendulum. What matters is this: If we do abandon our stilettos for good, unlike Kathleen Turner’s unlucky heroine, it will be by choice.

This story appears in the September 2017 issue of ELLE Canada