Iris van Herpen is Pushing the Boundaries of Fashion

Iris van Herpen: Transforming Fashion opens June 2 at the Royal Ontario Museum with over 40 pieces showcasing the evolution of the designer’s larger-than-life work. 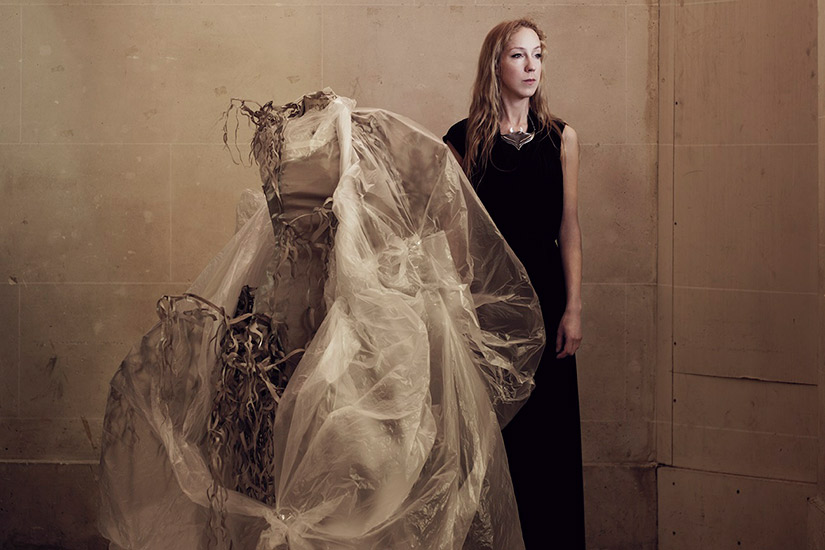 For over a decade, Iris van Herpen has been at the edge of fashion. Since her first show in 2007, the Dutch designer (and former Alexander McQueen intern) has been at the forefront of avant-garde haute couture, producing just two collections each year. She pioneered construction techniques like 3D printing and frequently uses unconventional materials like umbrella ribs, silicon feathers and iron filings to create her garments. Van Herpen’s work is often inspired by nature, and she creates garments that evolve as life does. One example is a dress made from metal gauze that has changed colour as it slowly oxidizes. Björk, Tilda Swinton, Lady Gaga and Solange (who wore one of her designs to this year’s Met Gala) are all fans of her work.

The exhibition features over 40 pieces including dresses, shoes and a headpiece from 15 collections spanning 2008 to 2015. The ROM is the only Canadian venue and the final stop of the exhibit’s North American tour.

Dressed a shimmering silver skirt Van Herpen, who came to Toronto for the opening of the exhibition, gave a tour of the collection and spoke about the exhibition, her collaboration with Canadian architect Philip Beesley and why interruption can sometimes be a good thing.

What do you hope people will take away from the exhibit?

“I hope it inspires them to see fashion in a different light. I think fashion can really be a form of art and I hope this exhibition really shows that. I hope that it can give them a glimpse of the boundaries of fashion and how we can look at fashion in the future. I also hope that it really shows the value of craftsmanship and how much more you can do with craftsmanship rather then only the traditional techniques. I really hope craftsmanship stays with us in our future and I hope it stays a big part of fashion of the future so I think that’s important. I think the last thing that I hope is that people can also look at femininity in a different way. I think we have a quite standard model of seeing our femininity and I really hope the exhibition creates a wider view of that.”

You collaborated with Canadian architect Philip Beesley on the Dome Dress. What was the process of creating that with him like?

“When we started working on that dress, we started working on sort of a lace-like texture that was very small and made from fabric. It was heat-molded but it was very fine. Then we started talking about the concept of the show because I was working with underwater musicians that learned over ten years a technique to sing underwater. The absence of air was really part of their work and their struggle at the same time so I started looking into air and what it does for us and how we relate to it. I had the idea of instead of making the lace, to go more abstract and to really start making a dress that’s almost not there. We started thinking bigger. Then we started developing the dome texture and we first made pieces like this. I started draping with it on the mannequin because that’s the way I work. I don’t draw. I just need to feel it. I need to feel the material and have it on the doll and see it in 3D. We made many small pieces first then I designed the whole dress. It went to the file-making and then it was laser-cut. That dress took five months and many people.”

Three-dimensionality is a big part of your work. Why is it so important for you?

How has the relationship between design and technology evolved for you over your career?

“In the beginning, I was completely focused on handwork only. I think that’s been a really important base, to really know all the techniques because the techniques that I learned in handwork, I use as a base for when I work with printing or laser cutting. The two couldn’t live without each other. I couldn’t have made the skeleton dress if I didn’t know all my handwork skills and it’s the same the other way around. The handwork that we do today and the knowledge that we have for it, we couldn’t have without all the experimentation outside of the craftsmanship. The relationship between the craftsmanship and technology is really important to me.”

What are you interested in exploring in the future?

“What I think will very much change, in all the industries, is that we have to get away from mass production. Sustainability is becoming more and more important so that’s also an important subject in my own work, to really try to change the process of making and to perhaps make things in the future that won’t last forever. That’s sort of contradictory when you’re a designer because in one way you wish for everything to stay but we are making so much stuff that we have to find new ways of transforming the things that we make.”

You’ve said, “All logic becomes chaos and that moment of surrender to the chaos, to me, is where the best designs come out.” What does that mean?

“I really believe intuition is important in my work. I really feel that when I think of a garment, then I just do that. It hasn’t been an evolution of a design process. I really need the accidents and the interruptions of things that I actually didn’t think about. That’s why the process is so important, that I don’t plan everything out but that I leave space for interruptions and little accidents that suddenly become really good.”

Is there anything new left in fashion?

“There’s always things to do that haven’t been done because our world is changing and that’s why there will always be new inspiration. That’s why for me, it’s so important to collaborate with all the disciplines because I think fashion in a way, goes pretty slow because it goes so fast. It goes really fast but not so much is changing. Because it goes so fast, no one really has time and space to change anything in our process. For me, it’s really important that I make two collections a year. I have six months for a collection. It’s still tight but it’s doable whereas a lot of people only have one and a half months to create a whole collection. You sort of go back to the things that you already know. There’s no time for new exploration but I think it’s important to also look at our future and to change the system that we have now.”

This interview has been edited and condensed. Iris van Herpen: Transforming Fashion and Philip Beesley: Transforming Space runs from June 2 to October 8, 2018 at the Royal Ontario Museum in Toronto.