Introducing the history of stylish travel. 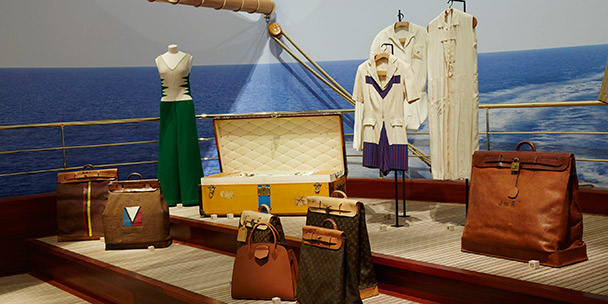 Louis Vuitton diehards usually have to trek out to the Paris suburb of Asnières-sur-Seine to see the ancient trunks and customer order forms the firm has collected over its 161-year existence. This is where the original family house and workshops are and where Louis Vuitton recently opened its private museum. From now until February, however, one need only go over to the Grand Palais on the Champs-Elysées to take in the gems from the company’s illustrious history. Volez, Voguez, Voyagez, curated by Olivier Saillard and designed by Robert Carsen, is a retrospective of Louis Vuitton’s collection of trunks, boxes, suitcases, purses and the occasional piece of clothing. All has been arranged into a “planes, trains and automobiles” theme, with art, music and literature thrown in.

Volez opens with a lovely Gustave Courbet painting of an oak tree, fitting in nicely with the room’s focus on the wood used for Vuitton trunks. And, in the “motoring” room, there is a Jacques Henri Lartigue photograph I love entitled Papa à 80km à l’heure, Mars 1913. It is a close profile shot of Lartigue’s father, with bandana and goggles on, motoring away at astounding speed, looking oddly like Peter Fonda in Easy Rider. The paintings, photographs and various memorabilia help set a mood reminiscent of the Belle Époque, during which Louis Vuitton came into its own. It was a time when the freshly industrialized world was beginning to take flight and hurtle itself down train tracks and roadways, exploits for which Vuitton provided all the accoutrements.

Among the pieces of historical interest was Gaston-Louis Vuitton’s steamer bag. The original design, introduced in 1900, was a painted-on leather-and-canvas invention made for stylish sea travel. I got to see a book trunk that Yves Saint Laurent owned, filled, predictably, with Pléiade editions of Proust. There was also an intriguing pair of upright trunks Vuitton made for Damien Hirst; they were filled, I was told, with surgical tools, but these were not in evidence.

The exhibition was a savvy mélange of very old and very new. The house had the foresight to track down as many of its items as it could in preparation for just such an occasion as the exhibit now on at the Grand Palais. In 1930, Louis’ grandson Gaston-Louis sent out an exhaustive, handwritten questionnaire to the firm’s customers in search of objects for its archives. It contained extraordinarily detailed questions about the Louis Vuitton trunks they owned, which Gaston-Louis was considering buying.

There were questions on the exact dimensions of the trunk, trunk diagrams requiring customers to mark where the hinges were, questions about whether the trunk was made of wicker or cardboard, whether the leather was of pig, cow or sheep… They went on and on.

Gaston-Louis also specified that he was looking for suitcases, bags, paperwork, letters, bills and travel items from the turn of the century, even those not made by Louis Vuitton. I had a hard time imagining that a customer would put so much time into answering all of Gaston-Louis’ questions and rifling through desks looking for bits of paper with Louis Vuitton letterhead even if he was part of the leisure class. But that is exactly what many Louis Vuitton faithfuls did. And we, who have visited this exhibition, are the lucky beneficiaries.

“Volez, Voguez, Voyagez” is open until February 21 at the Grand Palais in Paris.

READ MORE:
How to wear all-white to work
50 stunning cocktail dresses
This accessory will spark your pinterest