In conversation with a fashion icon

Fern Mallis talks business, the future of fashion and grandmothers. 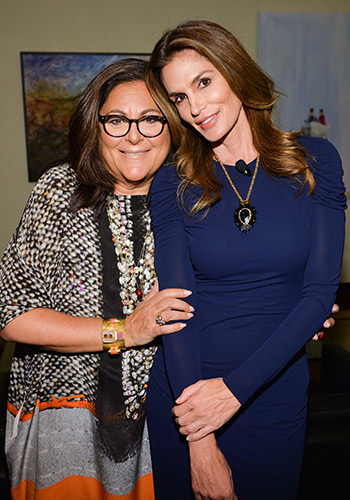 Fern Mallis is a fashion icon in her own right. She served as the Executive Director of the Council of Fashion Designers of America (CFDA) from 1991-2001, helped launch New York Fashion Week and was Senior Vice President of IMG Fashion from 2001 to 2010, during which time Fashion Weeks in Moscow, Mumbai, Sydney and Berlin were launched. After leaving IMG in 2010, Mallis took a short break to chill (her words) before launching the interview series ‘Fashion Icons with Fern Mallis’. The live Q&A sessions, which are held at the 92nd street Y in New York City, have featured everyone from Tom Ford and Bill Cunningham to Oscar de la Renta. Now, Mallis has published the transcripts from those interviews in Fashion Lives: Fashion Icons with Fern Mallis, giving us front row access to the legendary stories told on her stage. As part of a recent series of events hosted by Saks Fifth Avenue in Toronto-the retailer is opening in the city next month-Mallis came to town to interview Cindy Crawford, who was celebrating the launch of her own book Becoming. We had the chance to sit down with Mallis to find out how she really feels about fashion and what she has learned from some of the world’s top designers.

Why did you launch Fashion Icons? “I have a lot of respect for the fashion industry. Designers work their asses off and people always dismiss them as kind of silly, meanwhile, fashion is a huge part of the economy. And, unlike a painter who can have an exhibit, sell everything and wait another year to do a painting, Calvin Klein never had an opportunity to say ‘I’m skipping fall.’ You just have to keep doing it. It’s a machine that doesn’t ever stop.”

What’s it like being on stage? “Most good writers who’ve been [to the auditorium] and covered it from the Wall Street Journal say it’s like being in somebody’s living room and watching two friends talk. You feel like you’re listening in on an intimate conversation. I said to Calvin: ‘Why are you here? You’ve been retired for 10 years. You’re not in the business; you’re not making a fragrance; you’ve got nothing to sell.’ And he said: ‘I have great respect for the Y, but I’m here because of you! You asked me and I’m here for you.’ And I was like ‘Good answer!’ Calvin really helped open the door for a lot of other people.”

Tell us the story of getting Bill Cunningham. “I’ve been after him to do it since the beginning. I’ve loved him for my entire professional career. But when I asked him, he’d never say ‘no’ because he didn’t want to hurt me but he’d never say ‘yes’ and he was always evading the topic. After the movie came out (Bill Cunningham New York) he said he couldn’t do it, that it was too public. […] One night, I was at the CFDA Awards Gala. I was wearing a saffron-coloured chiffon dress I got in India and we were chatting at the cocktail party. And he tried to take a picture of me and I had a vodka soda in my hand and it poured all over me. And he got so upset. He said ‘In my 40 years I’ve never spilled a drink on anybody. Can I buy you a new outfit?’ and I said ‘No, it just came in from India this morning. It’s vodka, it’ll dry.’ And he did not leave my side. He was visibly upset and so he said ‘What can I do. I’ll do anything.’ And I asked him to do the Y and he said yes. And I said ‘I’m calling you in the morning to make sure you remember that you said yes.’”

Is there a common thread to some of the designers’ experiences? “One of the commonalities through a lot of these interviews is that the grandmothers were really important in their lives. Grandma probably had more time to nurture them as creative kids and as children, and were more exotic to them in some way.”

How has technology changed the fashion industry? “Technology is the biggest thing that has changed the fashion business. When I started at the CFDA there wasn’t a designer with a website or even a computer. I mean the secretary had a computer to do stuff, the bosses didn’t. Now, you can create your own website, create your e-commerce and sell it out of your apartment or garage or whatever. The magic is how does somebody find you with 8 billion other people on there. What drives those eyeballs to you – that’s part of the magic.

Who is on your dream list that you haven’t interviewed yet? “I’m still trying to get Ralph Lauren. I’ve tried everything. I’ve hit him up a hundred times at the Polo Bar. There’s also everybody from Manolo Blahnik and Naomi Campbell to Vivienne Westwood and Karl Lagerfeld.”

What does the future of fashion look like?
“As much as things change, they remain the same. People’s basic needs still don’t change that much. What everyone truly needs is some new underwear every so often. We all have enough stuff. But the fantasy and magic of the fashion industry is that it creates things and it creates the entire messaging and packaging around it all and somehow talks to you and says this is going to change your life. And [makes you think] ‘if I only had that outfit to wear out everything will be different.’ We probably know better but we still buy into it. And this industry does that better than anybody.

Can we live without buying into that? Is there an alternative?
“Sure we could. It just wouldn’t be as much fun. Everybody likes that sense of discovery. There’s nothing more exciting than opening up a new box or package and throwing some tissue paper in the air. And you know, those are very tangible experiences that have to do with buying something. And there’s an empowerment in doing that. “

What have the designers you’ve interviewed taught you?
“I’ve learned to have more self-confidence in my own life. The series has made me feel better about who I am and validated me in many ways because it’s a reinvention of my career. If you don’t learn how to be fearless, a little bit, then you’re not listening. Part of it is to not take it all so seriously. But you learn that subtly.”

What is your mantra in life? “Let the universe deliver. You may not be sure where things are going to go but just be open.”

READ MORE:
Why we all want to dress like the new Gucci girl
These coats aren’t for the faint of heart
11 enchanting photos of Karlie Kloss taken by her boyfriend