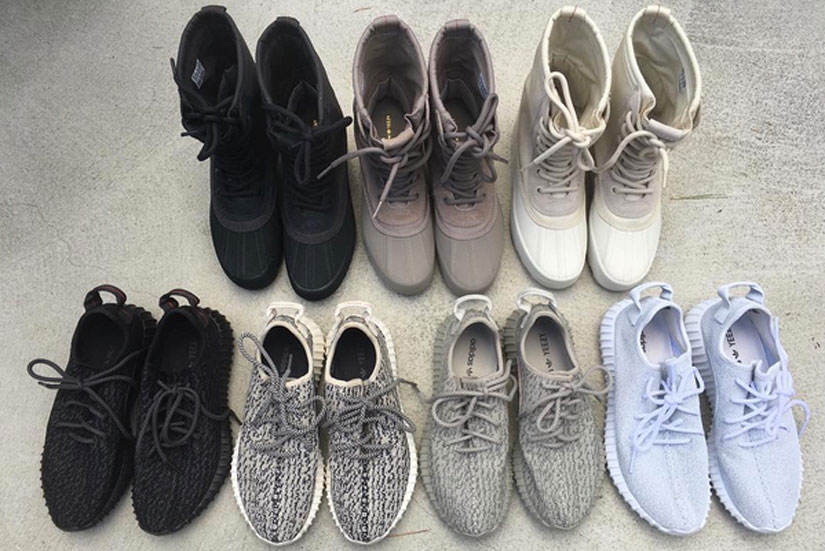 The morning my Yeezys arrived in the mail, I spent more time stunting on social media than I actually did wearing them. It took me a good ten minutes to nail the perfect Snapchat (opening the shoebox while the song “Good Life” played in the background,) and another ten to come up with a (not so) clever Instagram caption: “Yeezy taught me.” After posting, I watched the likes roll in and felt quite pleased with myself. “You got Yeezys!?” friends texted me excitedly, and I was like “yep,” **hair flip** “they’re real too! ;)”

Kanye West released the Yeezy Boost 350 in February of 2015, marking his return to fashion design. Once on the market, the shoes were available only in extremely limited quantities. While they retailed for $200 they were being re-sold on eBay to hype beasts around the world for upwards of $900 dollars. Celebs like Kendall Jenner, Gigi Hadid and even Justin Bieber in his “I’ll Show You” music video were spotted wearing Yeezys, adding to the buzz around these covetable kicks.

About a week after my Yeezys had arrived, an Instagram account called “Yeezy Busta” started commenting on my pics, accusing me of owning fake Yeezys. Yeezy Busta is an Instagram account dedicated to “making fugazzi flexers feel some type of way;” a.k.a., calling people out for posting pics of fake Yeezys on Instagram. This detail-oriented account considers everything from the speckling pattern on the fabric of the shoe right down to the height of the sole. The account will either comment on your photo or re-post your pic onto their feed and expose you to their 57,000 followers. Apparently, my shoes had a speckling pattern the Yeezy Busta referred to as “pacman,” not present on authentic Yeezys. When I realized that my Yeezys were in fact not the real thing, I deleted my Instagram photos and spent the next few days wallowing in misery, 808s and Heartbreak quietly playing in the background.

At the time of my faux-zy purchase, I was trying to get into fashion blogging, and spent a significant amount of my time posting regular photos of my #ootd on Instagram. I found myself constantly trying to come up with cool ideas and outfits that would attract followers and likes. While blogging totally granted me some amazing opportunities and led me to connect with inspiring creatives in my community, it also led me to become unhealthily self-aware, and reliant on approval from others. Every decision and act of mine was staged with Instagram always in mind. I was overly concerned with what my audience would respond or react to. What would cause the most buzz? What would cause the most hype? Yeezys seemed like the perfect purchase. They were an exclusive status symbol because hardly anyone could get their hands on them – owning a pair made me feel like I held the key to a special fashion club.

While my Yeezy mishap caused me a significant amount of stress, it provoked self-reflection and led me to reevaluate my priorities. My “Yeezys” currently sit on a shelf in my room, collecting dust, yet constantly reminding me to stay authentic. Buy shoes because you love them, regardless of the hype, and if you do ball out on a pair of Yeezys, consult the busta first.

READ MORE:
Beyonce was not the first celeb to wear a latex dress
6 times a stylist and a celebrity made fashion magic
Everything you need to know about the Khadra sisters