How to wear this season's go-big-or-go-home looks 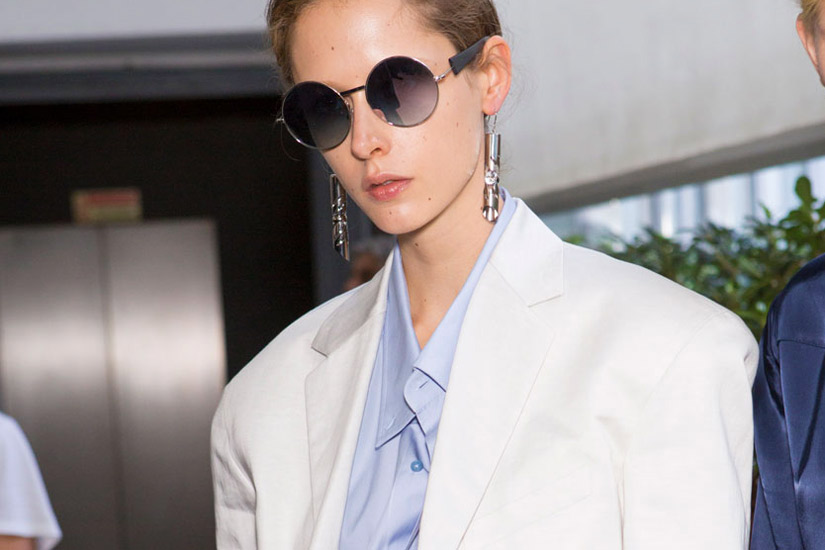 Thought you had fashion’s rules of proportion nailed? Well, this season is about to throw you a curve – a really voluminous one, complete with silhouettes that challenge the natural lines of the body. On runways from New York to Paris, power is the watchword. Follow the thread back and there’s a nod to the 1980s power shoulder à la Melanie Griffith as Tess in Working Girl or Grace Jones on the cover of her album Nightclubbing. Look to the present and you’ll see Hillary Clinton and her army of pantsuits stitched into this latest version of authoritative dressing.

Last fall, Demna Gvasalia, fashion’s newest enfant terrible, debuted his take on Cristóbal Balenciaga’s legendary sculptural shapes. He opened the show with a houndstooth skirtsuit equipped with shoulder pads and padded hips, imposing the hourglass shape. This season, he showed oversized blazers and trench coats, with the emphasis on the breadth of shoulders. A similar silhouette showed up at Jil Sander. Designer Rodolfo Paglialunga borrowed equally from the ’40s and the ’80s for a look that would certainly have appealed to Griffith’s Tess as she battled Wall Street’s male contingent to shatter the glass ceiling in corporate finance.

Phoebe Philo kept her signature Céline minimalism intact while playing with her version of a zoot suit: baggy high-waisted trousers and an oversized wide-lapel blazer. But she also provided a less formal take on the look by pairing her crisp-white boxy tailored jackets with leather culottes and printed maxiskirts – her suggestion on how to wear the jacket of the season outside an office environment. Despite being intimidating at first (as it’s meant to be), the shoulder-emphasizing jacket is as versatile as that boyfriend blazer you’ve been wearing for the past decade and can easily vibe with a pair of jeans for those I-just-threw-this-on days.

But the suit jacket is not the only authoritative garment that underwent deconstruction this season. The button-up dress shirt, a staple in every woman’s closet and a universal symbol of professionalism, also took on new shapes. Isabel Marant gave the crisp collarless button-up the same exaggerated shoulder of the power blazer du jour, with billowing rolled-up sleeves. She paired it with shiny high-waisted black pants for a slightly sinister look, but the pillowy shirt can easily be worn with breezy culottes, palazzo pants or a miniskirt on warmer days. Stella McCartney’s shirt/blazer hybrid is another ingenious semi-formal piece, paired beautifully with paper-bag-waist culottes. Burberry, Ellery and Marques’ Almeida gave their poufy sleeves extra oomph (bordering on pirate chic), best worn with slimmer pants or shorts. In some instances, the button-up featured a dropped hemline, transforming it into a shirtdress. But in the case of Rag & Bone and Hermès, it was layered over pants or leggings, keeping that utilitarian office look perhaps a more chill take on the power suit.

The most surprising twist of the season? Adding a tool-belt-like bag (yes, a fanny pack!) and holster as a statement of convenience and independence. (Plus, they look majorly badass.) For two centuries, women’s mobility has been somewhat hindered by the handbag. While backpacks certainly serve their purpose, the design itself is too cumbersome for all occasions. When Carrie Bradshaw donned a monogrammed Gucci belt bag in Sex and the City, it was greeted with enthusiasm, only to be lost in the sea of It bags that followed. Still, it was bound to make a comeback. The new crop of fanny packs takes a more sophisticated appearance, working well with both formal and sporty ensembles. For Jil Sander, the waist pouch that looks like a miniature bucket bag fits with Paglialunga’s interpretation of the workforce wardrobes of powerful women. Marni’s Consuelo Castiglioni, who, like Paglialunga and Philo, focused on the pantsuit this season, took the idea of a waist bag to the extreme, with large poacher-pocket bags mounted on each hip in a more practical version of Gvasalia’s padding. The Marni woman has never shied away from so-called man-repelling pieces, and there is perhaps no stronger message than creating literal volume around oneself.

On a less monumental scale, Stella McCartney’s casual brown faux-leather belt pouches pair seamlessly with a leisurely spring wardrobe, be it an oversized pyjama-like ensemble or a pair of jeans. For a nighttime option, Barbara Bui’s shiny leather fanny packs will go splendidly with a little black dress – or any fancy frock, for that matter – like an ultra-modern wallet on a chain. Interestingly, it’s the female designers appropriating a stereotypically masculine gadget who concocted most of these tool bags.

A shift in fashion silhouettes isn’t going to solve gender inequality in the workplace. But it does take confidence to pull off these looks, whether worn in a full look as seen at Marni or opting for one dramatic garment at a time. And perhaps that’s the key: The power in these shapes emanates at least in part from the wearer, as she dons her armour and heads into battle.