This made-in-Canada dress got the royal approval. 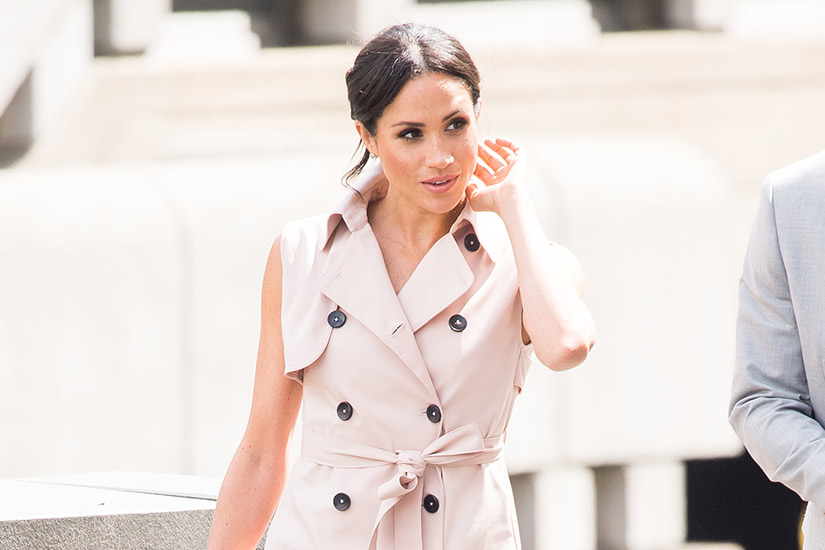 Now that’s what we call a good morning! Yesterday, Calgary-based designer Nina Kharey of House of Nonie woke up to the news that Meghan Markle wore one of her pieces at a royal engagement with Prince Harry. Markle donned the blush pink sleeveless trench dress while visiting an exhibition to mark the 100th anniversary of Nelson Mandela’s birth in London.

“I couldn’t believe it at first,” says Kharey, who launched her ethically-produced, made-in-Canada line in 2008, told us. “I had to Google it and look at it myself. She looked so amazing in it. I’m just riding this wave — I haven’t had a moment to sit down and really take it in.”

Here’s what else she had to say about the major milestone and Markle’s royal style.

Image by: Courtesy of Nina Kharey

When did you find out that Meghan was going to be wearing your dress? “Honestly, I’ve been stalking her for a while. I know she had it but didn’t know if she would wear it publicly or not. That morning I woke up to my phone buzzing and it was my PR team letting me know that she’s wearing something of mine.”

What’s the response been like? “I can’t believe how much response there’s been. Everybody loves the trench dress and I’ve read that it’s their favourite outfit so far. My emails have blown up and my orders are coming in really steady so I’m definitely feeling that effect.”

Why do you think she chose this particular style? “When I designed this dress, I just wanted to make something that was classic, simple and very easy to wear. You can throw it on when you don’t know what to wear, step out the door and you’re still looking chic and well put-together. That’s exactly how she came across. I loved her messy bun — it worked really well with the collar. She looked so put-together with just the one piece and accessorized it perfectly. That’s exactly what my intentions are when I’m designing all my pieces.”

What does this mean to you and for House of Nonie?  “I think it’s just amazing to get the royal approval. It makes me feel like I’m on the right track and that I’m doing the right thing. Business-wise, this is exactly what I wanted to happen in order to go international. I needed that exposure and this is probably the best way to get it — with the most famous woman in the world.

What do you think of Meghan’s style since becoming a royal?  “I’m a huge fan of her style. I think she’s always been someone who looks for the classic, timeless pieces on the simpler side. I think she [dresses] very appropriately and the only changes that I’d say I’ve really noticed is that her style’s become more refined and she’s realized what she looks good in and what she feels good in when she’s out at these public engagements.”

If you had a message for Meghan, what would it be? “I would thank her for giving the little guys a chance and for noticing us. Thank her for all the Canadian designers that she’s brought into light and got all this attention for on behalf of all of Canada. I would be thanking her because I know how hard it is when you’re trying to get the world’s attention. It’s really hard reaching out to people. They want to see something big happen and she’s doing that for us so that would be my message to her, is just a big thank you.”