The pantsuit — because not every girl wants to wear ruffles and bows. 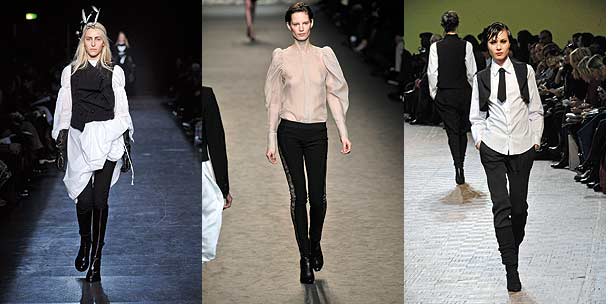 Action and reaction. Girls dressing like boys, and men dressing like women­­: It’s been around since Adam and Eve and their matching fig leaves. As Julie Wheelwright, author of the cross-dressing classic
Amazons and Military Maids, points out: “There were always women who wore trousers: women working in mines in the 19th century and in industrial professions in which they had to cover their legs for safety reasons. And fin de siècle women like [novelist] Radclyffe Hall, the journalist Natalie Barney (Colette’s lover) and Gertrude Stein were all forerunners. They wore men’s clothes to express their desire for power and men’s privileges.”

But while it was tolerated on factory floors and in radical literary salons, cross-dressing was verboten in polite society until the early 20th century. Coco Chanel broke the ice by showing up at hunting parties in her boyfriend’s jodhpurs and silk ties. She also converted other staples of the gentleman’s wardrobe to the women’s cause, like tweed hacking jackets, wool cardigans and sailor pants. Though she wore dress trousers herself, even Coco did not have the gumption to sell them to her society clientele.

Pantsuit chic is a Saint Laurent invention. The 1966 tuxedo suit he called “Le Smoking” got plenty of women kicked out of good restaurants on both sides of the Atlantic. Saint Laurent’s current successor, Stefano Pilati, plays the house androgyny card this season with a host of generously pleated and tapered trousers — some in black leather — and long, fluid, pinstriped jackets. He also introduced the Unisex capsule collection last spring. Billed as a womenswear take on YSL menswear, its washed-silk blazers, crepe de Chine pants and silk-organza trench coats “maintain the men’s silhouettes while offering an implicit femininity,” says the accompanying press release. “The anatomy of the female body has been considered and proportions adjusted to reassign the menswear looks to women.”

Need help with fall’s trends? Our fall fashion guide will give you the best tips!

There has always been a female fan base for high-fashion haberdashery. Garbo, Hepburn and Dietrich wore little else. Not so long ago, when Hedi Slimane was still at Dior Homme, women like
Madonna and Catherine Deneuve ordered suits dir­ectly from Dior’s menswear division and clamoured for a breakaway female faction of the house’s menswear. Part of menswear’s appeal to women is a technical one: They get off on the virtuoso tailoring of perfectly structured trousers, shirt and suit jacket — a masculine antidote to wrap dresses and goddess gowns. “Most of my clothing comes from the other side of the store,” says Natalie Tersigni, who manages the men’s and women’s multi-brand clothing boutique Gravity Pope Tailored Goods in Vancouver. “I’m drawn to menswear because of the construction and the fine details. It’s where that line between gender gets fogged out.”

Savile Row envy is what YSL’s Edition Unisex is banking on. It explains the success of womenswear brands like
Stella McCartney and Alexander McQueen, both of which incorporate a great deal of tailoring in their collections. McCartney, in particular, has made the boyfriend jacket a house hallmark. It has gone through several permutations over the years but can be roughly summed up as a longer, wide-cut or double-breasted jacket with assertive shoulders and lapels. The boyfriend jacket illustrates the androgyny paradox that Yves Saint Laurent and Chanel first brought to light: that an ultra-mannish garment can make a girl seem the farthest thing possible from a man, especially when she’s wearing that big blazer over a little skirt, leggings or nothing at all.

While Rihanna in a white pantsuit and sheer leopard-print blouse is sexy, Jessica Stam in icicle-coloured Rick Owens gear is post-sexual. In this version of androgyny, boys will be girls and girls will be boys, and whatever they are, they will be wearing some aspect of those Edwardian men’s suits that pervaded the runways — like at Limi Feu, which is designed by Yohji Yamamoto’s daughter, Limi Yamamoto. But then the Japanese are good at that kind of vibe. Comme des Garçons’ and Yohji Yamamoto’s body-unconscious fashion in the early ’80s pioneered a new kind of gender confusion: Who could tell if it was a man or a woman wearing that stuff? Same with grunge, which had boys and girls in workboots huddled under extra-large flannel shirts, lumberjack jackets and the odd prairie dress. “Sexless in Seattle” is one of the influences Chloë Sevigny has revived in her recent his-and-hers collection for Opening Ceremony — her second for this global concept store — along with some Manchester-punk knit sweaters and stovepipe and skinny trousers. Interestingly, at the Opening Ceremony show, Sevigny eschewed her own boy-girl aesthetic for a very unandrogynous pair of sexy black leather short shorts from Rellik and her own white shirt. What’s good for the gander, it seems, is not always good for the goose.

Is it more feminine to wear a suit? Find out on the next page …

Still, what Sevigny is subscribing to is a fun edginess in today’s gender changelings. There’s no political baggage in a pair of pants, and that ’80s hard, stylized look of a buzz-cut Annie Lennox or a muscle-bound Grace Jones has fallen by the wayside. Maison Jean-Baptiste, a new menswear boutique in Paris, features girls in moustaches plying men’s accessories on its website. It makes diabolical sense: The sunglasses, bags and shoes on display would do for either sex, making a compelling two-for-one economic argument for h unisex fashion. Noticing the rise in women buying men’s shoes, New York label Common Projects is bringing out a women’s collection of men’s sneakers, desert boots and oxfords adapted to women’s feet. Even fragrances are wafting across the gender barrier. It’s no longer Old Spice for men and ylang-ylang for women. D&G’s just-launched Fragrance Anthology and Comme des Garçons’ imminent perfume project with Hussein Chalayan are both strictly unisex.

If business deems it so, will men and women soon be interchangeable target markets? Leave it to the French to say “
Mais, non!” From its name alone, the fragrance and soon-to-be-clothing brand Juliette Has a Gun plays it both ways. “This is Shakespeare’s ‘Juliette,’ a romantic heroine par excellence, but she has a gun, which is the symbol of masculinity,” says Romano Ricci, a perfumer and great-grandson of Nina Ricci. With his sister, Antini, he is working with a men’s tailor on a women’s clothing line that will feature tuxedo jackets, trench coats and trouser suits, all topped with a fedora, which happens to be a Romano fetish item. “I like [Juliette’s] free, anti-conformist, risk-taking character — the way she can borrow certain codes of masculinity that don’t belong to her. The paradox here, however, is that Juliette longs for Romeo. What I don’t like about androgyny is that it can be beyond desire, that it portrays women who don’t need love. So there’s tension between this desire to resemble the other — men — and the need for the other. Our Juliette is half androgynous and half romantic.”

So if she dresses like a man, walks like a man and talks like a man, she might not be a man — but what kind of woman is she? While mulling this, I went to meet my friend Caroline for coffee. She had been shopping for a wedding outfit and was determined to find a trouser suit for the occasion instead of a tasteful dress, which the family was nudging her toward. She triumphantly pulled her new purchases out of a shopping bag: a bowler hat, a pair of patent-leather sneakers and a narrow, floral-print Steven Alan tie, which she would wear with a vintage tuxedo to the rehearsal dinner to make up for compromising on a dress for the wedding day. “I’ve been obsessing about bowler hats and bow ties ever since I saw The
Brothers Bloom,” she said. “I thought, ‘This is exactly what I want to wear: pants, shirts, vests, blazers that are sophisticated and tailored.’ When we were looking at tuxedo pants, my mom wanted something really feminine on top, but I didn’t want that. I just wanted a suit, with nothing drawing attention to my cleavage. It’s not that I’m trying to look like a man; I just think it’s more feminine to wear a suit. There’s less emphasis on sex and the body, but there’s more intrigue and ambiguity.”

5 trends to wear this fall and 5 to avoid!