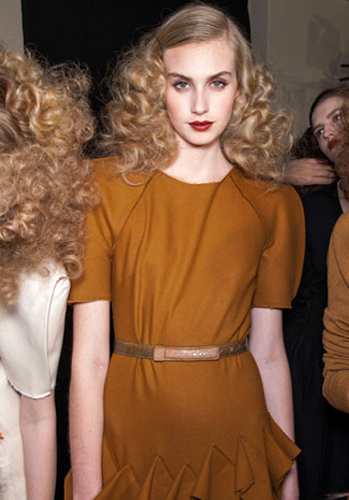 Film noir—the genre of sultry classic Hollywood crime dramas—has literally taken on a style of its own. This season, designers from Miuccia Prada to Marc Jacobs were influenced by the structured silhouettes (and blondes) of classic cinema. “It’s so immersed in our culture now people may not even know where the original references come from,” explains Kimberly Truhler, an L.A.-based film, costume design and fashion historian, about fashion’s love affair with film noir.

Truhler gave us a history lesson on the influence of classic cinema on fashion, and how film noir continues to inspire designers this fall.

Film noir fashion: Origins in classic cinema
What exactly are we talking about when we talk about film noir? “The ‘40s and ‘50s [provide] the bulk of the film noir genre,” says Truhler, citing French film critic Nino Frank who coined the term in 1946 to describe hard-boiled crime thrillers. In fact, World War II, was a major catalyst for a shift in fashion and costume design.

“Silk use in fashion was banned in 1942, so the shape and materials that you see in ‘40s clothing is about the structure,” explains Truhler. And since wool and cotton was largely available, in fashion, it naturally took shape as structured suiting. The strong-shouldered trend—seen at Gucci and Bottega Veneta’s Fall 2013 shows— can be traced back to Joan Crawford and the Hollywood costume designer fondly known as Adrian.

“As of 1920, with the film influence and influence of costume designers, we entered what I would consider the modern fashion era,” says Truhler. Take any of the Yves Saint Laurent-designed outfits worn by Catherine Deneuve in Belle de Jour—they maintain the same classic French chic-style as when the film debuted in 1967. For a not-so-subtle translation of an iconic outfit in the film, see the collared black dress from Valentino’s Fall 2013 collection.

More on film noir fall fashion —and the Hitchcock heroine — on the next page...

“A lot of the women in film noir specifically were
tough girls,” explains Truhler about the badass appeal of silver screen legends like Rita Hayworth and Veronica Lake. With the men overseas and limited availability of fabrics at the time, the attitude toward fashion was more, “‘I’m putting on my armor, I’ve got to go to work now, I’ve got to fight to survive.” The tougher silhouettes in clothing mirrored this social shift.

“It went from the end of the ‘30s—the silk charmeuse bias-cut gowns where women weren’t even wearing underwear anymore—to the ‘40s where you couldn’t even use those fabrics anymore.”

Women at the time were naturally inspired by the onscreen wardrobes of Grace Kelly and Marlene Dietrich—and we still are today.

Film noir fashion: The rise of Hitchcock heroine style
“Hitchcock style is largely introverted sexuality,” says Truhler about the look of the distress-causing damsels in director Alfred Hitchcock’s canon that’s taken on a life of its own. The tailored aesthetic—pencil skirts, pearls, fitted skirtsuits—was perpetuated by costume designer Edith Head, who began working with Hitchcock on 1954’s Rear Window.

“The Hitchcock heroine has a very classic look, but there’s always a little wink-wink about sexuality in there,” explains Truhler. “[Hitchcock] doesn’t want sexuality out there for everyone to see—he wants people to really think about it and so it can seem a little buttoned-up here and there.”

Film noir is everywhere this season, creeping up in
well-tailored suiting (and classic Hitchcockian blonde hair) at Marc by Marc Jacobs, to structured, colourful coats at Bottega Veneta. “For fall, film noir seems to be a perennial, cyclical reference,” says Truhler. “In fall, you’re going to want more layers, more suits, and the emphasis is naturally more on structure, and how to make a woman look sexy covering up for the season—what a better reference than film noir?”

And while designers have previously translated the aesthetic in a more literal sense—the late Alexander McQueen’s Fall 2005 collection was an obvious homage to Hitchcock’s
The Man Who Knew Too Much—this fall showed a looser interpretation. “Prada in particular, it is a bit deconstructed,” cites Truhler as a significant departure from Edith Head’s polished leading ladies. “It’s open, off the shoulder—it is that Hitchcock look if was totally buttoned up.”

The thing about the film noir moniker in the fashion sense is recognizing that it’s not a return of the look but a longstanding tradition of designers taking inspiration from classic cinema. “It happens every single year,” says Truhler, drawing on the return on the art deco trend with 2011’s
The Artist and ending this summer with
Baz Lurhmann’s The Great Gatsby. “There are designers that particularly love classic cinema, like Ralph Lauren, Isaac Mizrahi, Tommy Hilfiger.”

Truhler doesn’t see the film noir trend ending any time soon, nor the well of cinematic inspiration running dry: “From a designer standpoint, classic cinema is the gift that just keeps on giving.”