Where have all the true eccentrics gone? 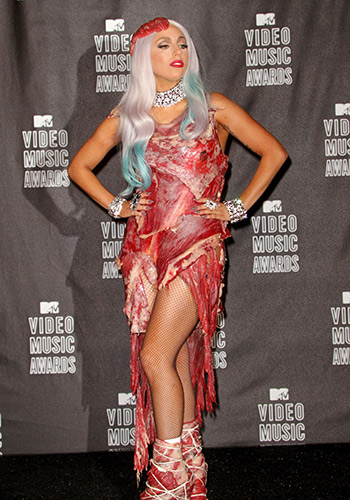 When some future scribe tackles 21st-century pop culture, the 2010 MTV Video Music Awards will likely warrant at least a footnote. It was a stellar, if odd, affair. Black Eyed Peas vocalist will.i.am showed up in blackface, for reasons that remain a mystery, and Taylor Swift dropped by and even sang in tune.

But the spotlight was on Lady Gaga. By any reasonable measure, she’d earned it, garnering a whopping 13 nominations, more than any artist in the award show’s history. Yet the reason Gaga made such a splash that evening had more to do with her appearance than with her performances: She was wearing a dress made of meat.

Oh, the beguiling strangeness of it all! Yet another memorable moment created by a woman who topped a 2012 British poll as the world’s most eccentric celebrity. Truth be told, however, Gaga’s ensemble was held together by sewing thread, sinew and a liberal salting of chutzpah: The meat dress was, in fact, a conceptual rip-off of Canadian artist Jana Sterbak’s 1987 sculptural piece Vanitas: Flesh Dress for an Albino Anorectic. That was the first deception. The second is the positioning of the Gaga brand.

There is something highly contrived and calculated about the former Stefani Germanotta, a talented composer and vocalist cursed with, let’s face it, a mundane marquee topper. Gaga is, of course, a persona – something she puts on for effect, like a dress made of flank steak. In carefully crafting her public persona for maximum gain, Gaga is about as wacky and off-the-wall as a corporate marketing plan. Eccentric? Hardly. Let’s call her “fauxcentric” – someone who, by creating an aura of eccentricity, attempts to hijack the oddball legitimacy of the born outsider.

In this regard, Gaga is hardly alone. In the woefully contrived Girls, Jessa, Hannah, Marnie and Shoshanna are so predictably off-centre that when, on the rare occasion, Lena Dunham allows some real human insight to creep into her scripts, it is inevitably overshadowed by the heavy-handed artifice of characters that are so cardboard you half expect to see “FOLD HERE” inked next to their supercool tattoos. A scraggy, dishevelled and barely coherent Joaquin Phoenix appears on Late Show With David Letterman claiming that he has given up acting to become a hip-hop artist and his stock goes through the roof. (That the whole thing was a hoax, part of a mockumentary titled I’m Still Here, is hardly beside the point.)

Marilyn Manson’s bag of eccentric tricks borrows heavily from Alice Cooper (real name: Vincent Furnier), a registered Republican whose true passion is…golf. Where to start with Russell Brand? Even if he does suffer from bipolar disorder, his shtick is so consistently over-the-top that one suspects its origins owe more to a carefully executed public-relations strategy than to biology. Even business is getting in on the fauxcentric act. Cardinal Zin, a California Zinfandel, featured the highly stylized, maniacally charged work of illustrator (and Hunter S. Thompson companion) Ralph Steadman on its label – apparently, fear, loathing and Las Vegas marry well with grilled meats, wild game and duck breast. Fauxcentrics, all.

What’s going on? When did artists start playing up eccentricity in the quest for credibility? Since forever, basically. The reception of Oscar Wilde’s poems, stories and plays certainly wasn’t hurt by what were, for Victorian-era times, his flamboyantly unique ways – something Wilde probably knew well. The unique and arguably brilliant paintings of Salvador Dali were ren- dered more so in the public mind by his outrageous behaviour: From wearing a deep-sea-diving costume to the opening of the 1936 London International Surrealist Exhibition to his ridiculous waxed moustache, Dali manufactured a madness that imbued him with the kind of status of which other, equally talented (and less noticeably off-the-wall) artists could only dream. Melting clocks? Meh. Melting clocks created by that crazy guy who appeared on The Tonight Show seated on a leather rhinoceros? I’ll take two, please.

But do we really hold eccentric – or, for that matter, fauxcentric – artists in higher regard? A recent study in the European Journal of Social Psychology indicates we do. In the study, participants who were shown a photo of Van Gogh’s Sunflowers assessed its merits more positively when they were told the artist may have cut off his earlobe. But that’s not all. If the participants already knew about the earlobe incident, merely reminding them of it raised the painting’s artistic value in their eyes. (When respondents in the same study were shown a fictional artist dressed “eccentrically,” they evaluated the fictitious art more favourably too.) All of this is part of the “eccentricity effect” – something we are complicit in constructing. It’s tangible and marketable. And because it is, it’s increasingly difficult to parse the real eccentrics from the faux.

It wasn’t always this way, of course. Eccentric was once something you were, not something you decided to be. In a clinical sense, eccentrics often exhibit signs of a schizotypal personality – a profile characterized by, among other behaviours, unusual thinking patterns and perceptions (and a willingness to accept them). According to Dr. Shelley Carson, a Harvard researcher who studies the connections between eccentricity and creativity, eccentrics have fewer cognitive filtering mechanisms than others; unable to shut out a barrage of incoming stimuli, they often focus on “their inner universe.”

READ MORE: Our favourite images from the Fall 2015 fashion campaigns

But who are the real eccentrics today? Can you even be a true eccentric now? That’s a tough one. The creative eccentric is spawned and nurtured in relative isolation: the square peg trying to navigate a world of round holes. Today, with the existence of niche cyber communities embracing almost any set of deviant ticks – everyone from plushie fetishists to people who enjoy eating nails can hop online and feel the love – there are essentially no more square pegs. Or, more accurately, there are a lot of square holes for them to fit in.

With that in mind, there are still some notable truly eccentric artists. Björk, the pixie-like bundle of quirks whose oeuvre is moored in decidedly non-commerical waters, seems to view the world, and her place in it, in a truly unique and off-kilter way. Yoko Ono has always been an outsider – especially so in her own native Japan, where conformity is practically written into the national DNA. (That she continues in the same vein now, largely out of the public eye, implies that self-interest has very little to do with the way she presents.) The late Edmonton-based artist ManWoman, whose body was almost entirely covered with swastika tattoos (his mission in life was to liberate the ancient symbol from its Nazi associations), was a genuinely different dude. And Comme des Garçons, the Tokyo-based label headed by Rei Kawakubo, has been lifting eyebrows at least since 1997, when its “lumps and bumps” collection – clothes adorned with distended, bulbous appendages that almost seemed organic – debuted.

For most of us, separating the truly eccentric wheat from the fauxcentric chaff is not so easy. There is no test to administer, no checklist that can confirm anyone’s bona fides. All we have to go on, really, is a variation of U.S. Supreme Court Justice Potter Stewart’s famous dictate regarding pornography: I may not be able to define it, but I know it when I see it.

Which brings us back to Lady Gaga. Outwardly outré, consistently controversial, she is someone who, time and again, has proven to be willing to embrace oddness and in a very positive way has given voice to those who feel that they, too, may be the square pegs in our round-hole world. But her actual output is hardly unconventional; even Dali knew that in order to be taken seriously, the eccentric artist should probably produce eccentric art. And that cuts to the heart of the problem: When we elevate the fauxcentrics and their art by buying into their shtick, we dilute and devalue the real eccentric artist – who, at least in the past, has been responsible for so much that has moved us forward.

You may disagree. In any event, like Justice Stewart, I’m calling it as I see it: For what it’s worth, I doubt very much, Ms. Gaga, that you were born this way.

READ MORE:
Women on the verge
It’s the season of the stylist
These stylish women of Instagram are taking #curvy back