Our modern-day mania for monarchy like Kate Middleton and The Royals, courtly style, swords and sorcery. 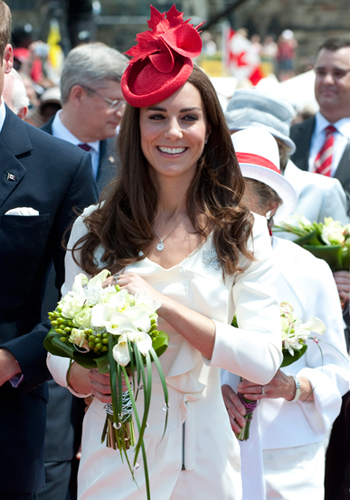 Thirty years ago, Lady Diana married Prince Charles. I was 12 years old at the time and not yet interested in fashion. I was, however, interested in fairy tales. I remember Diana’s long white train, the scarlet serge of the Foot Guards and the gleaming armour of the mounted Horse Guards surrounding the State Landau carrying the newly married couple.

About the same time, I also began my journey through J.R.R. Tolkien’s masterpiece The Lord of the Rings. Not a strong reader, and because I suffered a number of fevers, it took me nearly a year to complete the fantasy epic. I remember reading it in bed, following Frodo and his friends through Middle-earth in an uncanny seasonal lockstep: When the leaves faded and began to fall in my world, so they did in the Shire; when snow blocked the heroes’ passage over the Misty Mountains, snow seemed to bury my street; a year later, when the August sun began to dim over the tall cornfields across from my grandparents’ farmhouse, I read the final pages with tears streaming down my face because Samwise Gamgee watched Frodo finally sail into the Undying Lands, a world without death or pain.

Middle-earth had come to an end, and I had become an exile. Since then, I have learned that people will do crazy things to hold onto that feeling of enchantment. I myself played Dungeons & Dragons, and sometimes I traipsed through wooded backlots with similarly beguiled friends pretending to be wizards and elves. I also once met a chainsaw sculptor—a bear of a man—who showed me the inside of his log cabin. He had carved a bas-relief depicting scenes from Tolkien’s other great work, The Hobbit, on the entire back wall. It may have been carved with only a penknife, but, like I said, people will do crazy things.

So, it is with a certain bemusement and awe that I watch this season’s continuing passion for Kate, a.k.a. the Duchess of Cambridge. There are tweets, posts and column inches dedicated to parsing the minutest of her sartorial gestures. She is already a queen of fashion, if not the British Empire. Some of what she inspires is silly, but it’s all in the name of keeping the fairy tale alive and maybe making a few bucks too. For example, earlier this fall, Aruna Seth, a bridal shoe and accessories designer, created tiny footwear for Princess Catherine wedding dolls. The shoes are not mini-knockoffs of Kate’s white lace pumps by Alexander McQueen. Instead, they are reimagined slingbacks with crystal encrustation on the heels.

How the royal trend has effected pantyhose sales, fascinators and other sartorial finds, on the next page…

Then we have Hanes. The underwear company announced that sales of sheer pantyhose have rocketed up 85 percent this year because of the Duchess. Once considered frumpy, nude hosiery on the legs of Kate— who has to wear it as it is de rigueur in the public presence of the Queen— has convinced women that it can be worn to great advantage.

Another classic detail credited to the Middleton Effect is the capsleeve dress. When Kate wore a nude coloured cap-sleeve bandage dress—the Shola—by Reiss during a visit to the White House last May, Reiss’ website crashed under the crush of queries.

Admittedly, not everyone is so taken with Kate. At New York Fashion Week, attendees grumbled that she is merely a trend follower, albeit a highly influential one. It is a point well taken, but we should give credit where it is due. Without Kate and her new in-laws, we would not see the romantic royal pastiche of Nina Ricci’s ready-to-wear collection. The fashion label, under the helm of designer Peter Copping, offered tiara-like hairbands, high-necked blouses and fur-trimmed collars— most of it drawn from the style repertoire of the real Queen Mother and a dash from the movie one played by Helena Bonham Carter in The King’s Speech.

The Duchess, one can argue, has popularized a coherent fashion lexicon— that of British aristocracy—to a broad audience accustomed to the magpie whims of pop stars, misbehaving supermodels and reality-TV stars. Where would pillboxes, fascinators and more nude in the form of platform heels be without Kate?

Of course, those particular details could have come together in other ways, perhaps under the banner of Old Hollywood glam or speakeasy chic, but they didn’t. They came to us this season in a configuration more enduring, closer to a pure Jungian archetype, sourced not from pop culture but from our own childhood fantasies. Indeed, this season we have seen not only a longing to play the princess through fashion but also the desire to be in the fairy tale, to be in another time where high adventure and gallantry is just around the bend.

How monarchy, swords and sorcery have made an impact on the fashion industry, on the next page…

In a conversation with Lizzie Post, the great-great-granddaughter of Emily Post and coauthor of Emily Post’s Etiquette, 18th Edition, which came out this fall, Post and I determined that women are ready to embrace tradition, courtly manners and chivalry in our modern lives. “People are so frustrated and tired of the negativity of the world, and their daily conditions, that they are happy for anyone to hold a door for them,” explains Post. “Manners are like a breath of fresh air. People are yearning for them, and chivalry costs nothing.”

It would be a mistake to think that we are simply experiencing a reboot of Lady Diana’s fairy tale with puffy sleeves, puffy hair and a terribly tragic end. The mood this time around is less naive. We are more ready—as is Kate—for the gritty reality of royal life. We know that her life is no cakewalk, despite its guilding. We are capable of pitying her as much as we envy her. And when we watch the immensely popular TV miniseries based on George R. R. Martin’s epic fantasy novel, A Game of Thrones, we can say to ourselves, between mouthfuls of microwave popcorn, “Yeah, that’s more like it.”

The book and show have the traditional epic elements of sword and sorcery, but they also have gritty palace plots, incest and tautly drawn characters whose struggles are easy to identify with. My favourite character is Arya Stark. She is a feisty daughter of a great lord who, when cast from her castle, poses as a boy. Arya is no damsel in distress. She is a power princess, and she is not alone.

This season, we saw numerous fashion collections featuring what appear to be indomitable monarchs, swordswomen and Sherwood Forest bandits. For example, Alexander McQueen offered an Elizabethan highnecked coat adorned with fur, feathers and heaps of feminine toughness. Among the English designers the royal bride has favoured, Issa of the blue engagement dress paired a fluid, peaked-lapel coat dress (in Kateready red) with a matching Robin Hood-like, featherthemed cap. It may not be exactly the type of garment that Kate would normally wear. It may be too fluid, too fanciful, too fey for a woman who dresses to protect herself as much as to express herself.

But then again, even princesses, frozen in a sea of flashbulbs and locked in an empty smile, may fantasize between shutter clicks about the promise of happily ever after.

*JJ Lee is the author of A Measure of a Man: The Story of Father, a Son, and a Suit.