Are the new long skirts peasant chic or punishingly puritan? 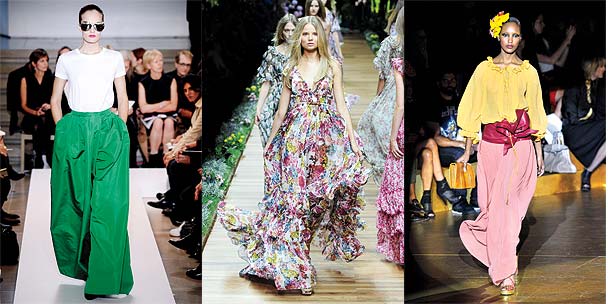 Why? Jil Sander, Marc Jacobs, Dolce & Gabbana, Gucci, Rodarte, Band of Outsiders and Yves Saint Laurent all did it.

Trendology After the hoopla of the ’60s miniskirt, the maxiskirt (the stylish offspring of the maxidress) became a ’70s fashion staple. It had a brief revival in the ’90s but nothing like its Me Decade heyday.

Test drive Legs are so 2010. After seasons of minis, micros, hot pants and jeggings, designers are giving our shanks a breather and swathing them in long skirts. And some of them are real floor-sweepers. I put on a long, silky peach Marc Jacobs skirt that made me feel like an extra in Gone With the Wind. But what does one wear with a curtain? In Jacobs’ show, he paired the skirt with a floaty peasant top, so I tried that and then added a pair of gladiator sandals. Uh-uh. I looked like I should be photographed—the camera’s lens smeared with Vaseline—holding a tambourine, wearing a crown of daisies in my hair and running slow-mo through endless wheat fields humming Valdy’s “Whirl & Twirl & Swirl.”

The problem with long skirts is that they look formal and uptight, not sexy and summery. Dolce & Gabbana compensated for the new puritan length by doing one in a see-through leopard print with lace inserts. My first problem was that I didn’t have a slip that long. And neither did Victoria’s Secret. Only bridal departments have them—in white, beige and black. With a slip under it, the dress looked like something a desperate housewife would wear if she were just getting out of bed to go to the door and seduce the gas-meter man. “Nice negligee,” said Charlotte, whom I sometimes have coffee with in the morning. “It looks terrible under your coat.”

Which brings me to my last gripe about the new length: A long skirt demands a long coat or a very short, snug jacket—but nothing in between. I gave the new maxi one last try. I put on a heart-stoppingly green Jil Sander skirt in nylon taffeta (nice that it has pockets!) and paired it with a small T-shirt. Okay, that was easy. What next? A trench. I have an Aquascutum one; off-white was the wrong colour, but the proportions weren’t bad. I tried a short, tight black motocross jacket and, for good measure, a pair of Converse sneakers. Now I looked like I was going to the prom but could break into a cross-court dash at any second and perform a layup. “You look weird,” said my littlest one.

Verdict 5/10 mitigated. The long and short of it: Children were adamantly against the gown-and-sneaker style combo, but my women friends loved it. Men wisely stayed neutral.