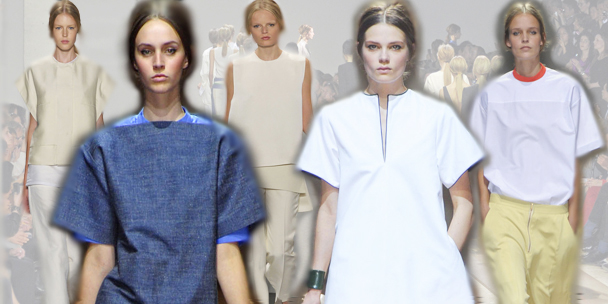 TREND Andro-scrubs.
WHO’S DOING IT? Céline, Calvin Klein and Dries Van Noten.
TRENDOLOGY Androgyny is a recurring trend whose roots go back to the YSL tuxedo suit, but the periodic palette-cleansing of asexual fashion is an ’80s phenomenon best attributed to Helmut Lang and Jil Sander.

TEST DRIVE The art of dressing like a man is a simple one: Put on a pair of pants and flat shoes. The hard part is figuring out which man you want to look like. If it’s your father, the advice you seek won’t be found within the narrow confines of this style column. But if it’s Al Capone or James Bond, simply avail yourself of some of this season’s wide-gauge trousers or a tuxedo suit and accessorize with a weapon of some sort, like a Walther PPK. Easy.

But what if your style icon is Dr. Shepherd on Grey’s Anatomy? After all, there’s nothing more androgynous than scrubs and a surgical mask. Which is exactly the look Phoebe Philo at Céline is selling us—minus the mask. The Céline wardrobe has lines as clean as a Purell dispenser and is every bit as sexy. Critics are applauding its astringent minimalism, but where does this leave the average lay-fashionista?

My advice? Accessorize, accessorize, accessorize. And I don’t mean with a stethoscope. When I tried on a collarless white tuxedo shirt and visible-zip trousers from the Céline collection, my first instinct was to slip on white orthopaedic clogs and take somebody’s blood pressure. Instead, I painted my toenails Biker Blue and put on a pair of code-red open-toed YSL platform sandals. Still, when I showed up for coffee in my Céline all-whites, my old friend Jean-Philippe immediately held out his wrists and murmured that he had enjoyed his escape but was ready to go back to the insane asylum. Jean-Philippe’s diagnosis: This outfit was on life support and it was going to need more than a pair of hooker platforms to get a pulse going. I went home and piled on sundries. A floppy black H&M hat and big retro-frame sunglasses suggested paparazzi paranoia—an affliction of the terminally glamorous. I put on the biggest ring I could find—a carnelian cocktail knuckle-buster worthy of Liberace—and an Aurélie Bidermann leather cuff bracelet with gold-plated studs that no punk would ever be caught dead in. And then came the clanker: a surrealist Proenza Schouler necklace featuring a brass owl set with cabochon stones. This would have been overkill with any other ensemble, but here I managed to save a dying look and strike a blow for maximalism: Take that, Phoebe Philo! And that! And that! And that!

VERDICT Salvageable when worn with extras. 8/10.