The Spring 2014 runways were awash with Pop Art prints and painterly swirls. What's behind the fashion world's art obsession? 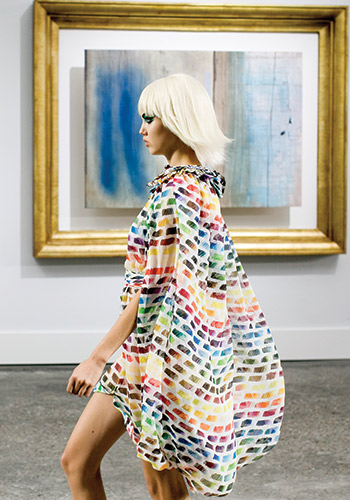 When my nephew David visited me recently in Paris, he wanted to go to the Louvre, but not for the reasons that most people do. He wanted to see
The Entombment of Christ a painting by Caravaggio that was printed on his Pyrex Vision hoodie, the streetwear line designed by Virgil Abloh, Kanye West’s stylist. As it turned out, the painting wasn’t in the Louvre collection, but as I looked at all the other Caravaggios, I suddenly saw what Abloh saw: Baroque pathos looks fantastic on a T-shirt.

GALLERY: 10 ART AND FASHION pieces you need to own

The spring/summmer 2014 collections are likely to generate similar pilgrimages to the altars of fine art. The Musée Magritte in Brussels is sure to be mobbed by stylish surrealists wearing items from Opening Ceremony’s capsule homage to the Belgian painter: trousers dotted with floating heads, pink sweatshirts printed with a glass of water sitting on top of an umbrella and Birkenstocks printed with a disembodied face hovering over a seascape from Magritte’s 1948
Shéhérazade canvas. Fendi fans, meanwhile, will have to trek to the James Turrell Museum in Argentina to pay their respects to the 20th-century master of light, colour and space wearing Fendi’s
glowing organza-panelled dresses. And Jil Sander devotees will be prowling Arte Povera exhibitions, a little impoverished themselves from investing in their Alighiero e Boetti-print Bermuda shorts.

Art and fashion go together like beer and nuts. As far back as 1931, French designer Paul Poiret wrote in
The King of Fashion: “Am I a fool when I dream of putting art into my dresses, a fool when I say dressmaking is an art? For I have always loved painters, and felt on an equal footing with them. It seems to be that we practice the same craft, and that they are my fellow workers.” Some artists may balk at being equated with a dressmaker, but not French Fauvist Raoul Dufy, who produced
textile prints for Poiret. Salvador Dali created a print of cracked rock for 40’s designer Gilbert Adrian, and Yves Saint Laurent jacked just everybody, from Mandrian to Matisse to Van Gogh, whose irises and sunflowers he transplanted onto collarless jackets.

When fashion encounters art, the outcome is a visual dream!
Read on for more on the similarities and designers who have painlesly meshed the two…

Halston enlisted Andy Warhol’s work for his fabric prints, as did Raf Simons when, last winter, he decorated Dior bustier dresses and handbags with early Warhol sketches. “For me, Warhol made so much sense,” wrote Simons in the show’s program notes. “I was interested in the delicacy and sensitivity in the early work he did. It was that notion of handwork and personal signature that fitted throughout.”

GALLERY: How to wear punchy patterns to work

In these digitally dominated times, the idea of authorship—of an actual flesh-and-blood hand having drawn or painted the pictures on our clothes—is terribly appealing. While Phoebe Philo didn’t paint the pieces in her standout Céline collection, she borrowed brush strokes from Brassaï’s photos of postwar Paris graffiti and then amped up the texture, outlining paint swirls in frill and mimicking drippy paint with fringes of thread. Appearing on floaty skirts, blouses and coats, the strokes are as bushy as Cara Delevingne’s eyebrows and just as charismatic. “The smoothness of a digital image [has] a slickness, a cartoon quality,” observes artist Howard Tangye, head of womenswear design at London’s Central Saint Martins College of Art and Design. “It’s not a bad thing, but it takes away all the sensitivity of a real work of art in which you can see the brush marks. A flat coloured image doesn’t have the same power as the real thing.”

The real thing is exactly what we got from Miuccia Prada, who commissioned muralists and illustrators to paint her Milan runway walls over several days and nights. The murals, feminist in feel, were then reproduced on coats, handbags and gym-friendly shift dresses. The collection has the cachet of one-off artworks, but it has something less tangible too, tied into the way the art was produced—collectively, almost like a ’70s happening, and outside the digital domain. “We’ve used digital processes for other spatial installations, but the idea here was different,” says Michael Rock, founder of the New York based design consultancy firm 2×4, which helped curate the show and with whom Prada works regularly. “We wanted to create an environment where the work would happen collaboratively between artists working simultaneously. Something happens when creative people work together that can’t be reproduced in the digital space.”

Fashion’s latest tango with the art world, then, is likely sparked by a very human craving for connection. From the hand comes the emotion of a bold curling stroke of a brush and the effort of a pencil-drawn line. We want to know that someone is behind all this stuff. Even if it’s not Caravaggio