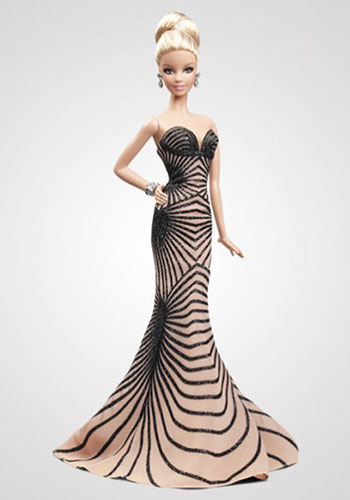 Barbie Expo comes to Canada
In news that will delight your inner 12-year-old, the world’s largest permanent exhibit of couture Barbie dolls is coming to Montreal. Les Cours Mont-Royal will be turned into 5,000 square feet of one-of-a-kind Barbies wearing miniature designs of Christian Dior, Versace, Givenchy and Oscar de la Renta (not even Kim K has wardrobe this good). Celebrity Barbies will also be making appearances, including 12-inch versions of Kate Middleton, Elizabeth Taylor and Beyoncé. The event opens to the public on February 11th.

Last chance to see Rodarte’s Star Wars gowns on display at the ROM
This Sunday, January 24th is the last day to see Rodarte’s silk gowns depicting iconic Star Wars characters. The gowns are digitally printed and embellished with Swarovski crystals, and there’s nothing nerdy about them.

Van Cleef & Arpels unveils a new boutique space inside Birks in Vancouver
Who doesn’t love a great makeover? Fine jewellery house Van Cleef & Arpels has recently renovated its boutique, located inside Birks on West Hastings Street. The space is the definition of opulence, think gold leaf wall coverings, black lacquered wood furnishings and a crystal chandelier. As Valentine’s day draws near, it might be time to start dropping some hints.

Cartier releases the new Paris Nouvelle Vague collection
A stroll along the Seine, a walk across the Pont des Arts, the sun setting over another perfect Parisian day. The glittering capital was the inspiration behind Cartier’s latest collection. The new line is made up of rings, necklaces and bracelets that evoke the feeling of Parisian life and its colours, lights and feelings. The collection will be available at Toronto’s Bloor street Cartier boutique (until February 15th) and at Yorkdale (from February 16th – March 16th).

READ MORE:
Jump on this denim trend before everyone else
Exactly what is “lampshading?”
The top model Instagrams of the week