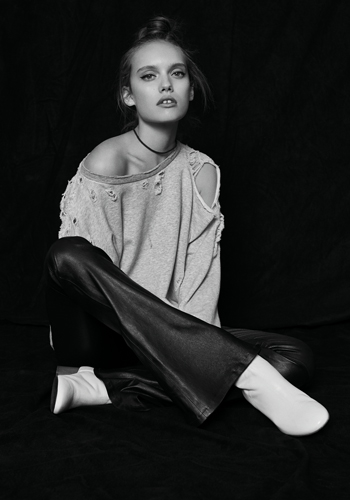 Forward by Elyse Walker collaborates with Unravel for 7-piece capsule collection
If you’ve been trying to master the art of off-duty model style, look no further. Forward by Elyse Walker partnered with Unravel to launch a 7-piece capsule collection consisting of perfectly undone basics. The brand, which has quite the celebrity fan base including Gigi Hadid, Chrissy Teigen, and Kylie Jenner, is known for edgy basics like lace-up leggings, bomber jackets, and the raw hem sweatshirt that was famously spotted on Kendall Jenner. Shop the full collection here.

Gucci is headed to Westminster Abbey
Gucci confirmed that it will host its 2017 Cruise Collection at Westminster Abbey on June 2. This is the first-ever fashion show to be held at the iconic church, which has seen historical events like the wedding of Kate Middleton and Prince William.

Shop Richer Poorer at its Toronto pop-up location
LA-brand Richer Poorer has set up temporary shop in the SHOES.COM space on Queen W. in Toronto until February 7. The label’s signature socks come in all manner of fits (knee-high, roll-top, ankle) and designs (flowers, stripes, polka-dots), and are a sure way to instantly upgrade your footwear game. Bonus: The men’s collection also includes boxers and super soft T-shirts, so your V-Day gift giving dilemma has just been solved. You’re welcome.
356 Queen Street West.

Kim Kardashian releases a fresh batch of Kimojis
Back in December, Kim Kardashian officially crowned herself queen of the internet after releasing a collection of Kim Kardashian-themed emojis. Fans will be thrilled to know that Mrs. West has added a new batch of Kimojis to the mix, which include GIFs of Kim blowing kisses, and hitting Khloe across the head with a handbag, referencing this early episode of Keeping Up with the Kardashians. You can download the app here.