Carven's Guillaume Henry chats with ELLE Canada about living a creative life and working with the Carven brand. 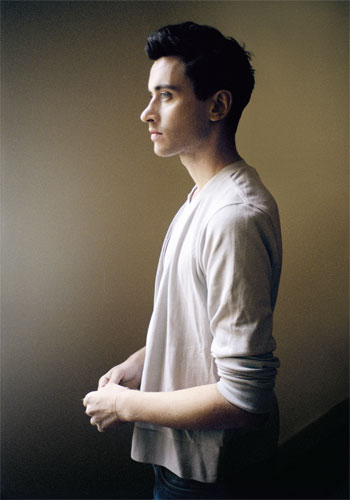 This particular fashion shift started, as so many recent ones have, with Alexa Chung.

There she was, outside London’s Royal Academy of Arts’ summer party and acknowledging the paparazzi with a self-conscious half-smile, all coltish legs and
statement handbag. Nothing new there.

But apart from the Chanel 2.55 resting on its chain strap against her hip, her outfit was somehow underwhelming.

LONDON TRAVEL GUIDE: Where to eat, drink and go out

While other celebs walked by in significant frocks, Chung stood there in something simple and black, sleeves pushed to the elbow, hem up to there, a prim white collar its only defining feature.

She looked, as she always does, like a spectacularly pretty girl. But, more than that, she made everyone else look overdone. In her anonymous, nonchalant, oddly modest dress, she somehow stole the show.

TREND REPORT: How to wear the HOTTEST spring accessories

The photographers shouted at her, as they do: "What are you wearing? Who is it, Alexa?"

"Guillaume Henry for Carven," she answered.

This, of course, was over two years ago, back in June 2010. A couple of months later, Chung appeared on ELLE U.K.’s subscriber cover in the same dress – which, as it turned out, she had been given that day.

By this time, the photographers knew about Carven, as Emma Watson had also made an appearance wearing the same dress in pale-grey wool. Since then, Beyoncé, Rihanna, Gwyneth Paltrow and rest of us know about Carven too.

But who is Guillaume Henry? And how has Carven – a decidedly uncool Parisian couture house remembered for its Ma Griffe perfume, if at all – somehow become the hottest new thing in fashion? Let’s get something straight from the start: This isn’t an intellectual challenge.

Though the label has been influential in the three years since its reinvention – the current love for the Peter Pan collar is down to Carven – this isn’t about clothes that change the aesthetic or move fashion forward. It’s much more democratic than that.

Carven is about stuff that women just really, really want to wear – at a price that means they can actually afford to. In that sense, it’s similar to Acne and Isabel Marant – though clearly it looks like neither.

As Henry, 34, explains: "It’s always something you want to put on straight away. I just try to create pieces that focus on a woman’s needs. I hope anybody would feel herself in our clothes."

When Henry was offered the job of creative director at Carven in 2009, he was unknown. Born and brought up in the farmlands of eastern France, he was the youngest son of parents who indulged his creative aspirations.

After graduating from the Institut Français de la Mode in Paris, he briefly launched his own label but gave it up ("I wasn’t strong enough
to continue as I had no possibility to realize my dreams") to work at Givenchy for three years under designer Julien Macdonald and, later, Riccardo Tisci.

He then went to Paule Ka for another three years, where he learned a certain useful pragmatism: "I found out what customers want and need. Fashion is part of art, of course, but it is definitely an industry. You can’t have one without the other."

When approached for the role at Carven, he didn’t hesitate. "For the first time in my entire life, someone said ‘There’s a blank page and you have to write the story,’" he says. "It was super scary – but also super-exciting."

Now, after just six seasons, Carven has more stockists (currently 600) than Henry can count, standalone stores in Paris and Hong Kong – with another opening in New York and one planned for London soon – a growing accessories line, plus a men’s collection. (In Canada, Carven is sold in upscale boutiques in Montreal, Quebec City, Toronto and Vancouver.)

After a series of small presentations, Carven held its first catwalk show earlier this year. Next year will see the launch of a fragrance. Among a group of young French designers to emerge in recent years, Henry – funny, handsome, self-effacing – is undoubtedly the star. He seems horrified by the idea, though.

"I just awoke Sleeping Beauty! I’m lucky, because of all the French brands, Carven is not an intimidating one. When I see pictures of Madame Carven, I always think that I could be friends with her."

Founded in 1945 by Carmen de Tommaso — now aged 103 (she designed until the age of 83) – the house was known for a sporty yet feminine approach. (Madame Carven, as she became known after creating the label, was apparently the first designer to create couture outfits for skiing and even designed Air France’s uniforms in the 1960s.)

But, aside from the perfume, Carven was dead as a brand when Henry took over. "I didn’t have an image of the clothes," he says. "There were no codes as there are at Chanel and Balenciaga."

Instead, without fuss or fanfare, he carefully, cleverly, gave it contemporary relevance while retaining a signature 1960s sensibility: fresh and simple but not minimal.

"The only thing I wanted to keep was Carven’s spirit," he says. "I’m interested in the notion of charm – something you don’t often see in fashion. Maybe it’s considered uncool, but I’m old-fashioned. And there is something appealingly old-fashioned about Carven."

You can always find the same kinds of pieces in a Carven collection – Henry has an obsession with school uniforms and well-dressed Parisian ladies of a certain age – and from these, it’s easy to see what he means: a navy-blue lace dress, gathered at the neck and wrists, falling to the knee in polite folds; a longsleeve black mousseline dress with a pristine white collar; a simple knit sweater that gives the impression of having an oxford shirt underneath.

What makes Carven pieces stand apart from the crowd? Find out on the next page…

The pieces are "proper" – which is not a word much used these days – but also playful. "With Carven, I wanted to create something that didn’t exist," says Henry.

Though Chung isn’t a muse ("We understand each other, but when she’s wearing Carven, it’s still her"), she represents the brand well: She has the body to wear anything but chooses to reveal only a little. "You know, there are words like sexy, appealing…all those words I feel a bit scared of," says Henry.

"I don’t really know what sexy means and I don’t really want to. For me, it is much more appealing to imagine somebody undressed than to actually see her undressed. The Carven girl isn’t dull – but she’s never obvious."

It’s because of this that the signature Peter Pan collar came about. "We had this super sexy black dress – a version of the one Alexa wore in ELLE – but for me it was too sexy. It didn’t say ‘Carven’; it said ‘I am a sexy dress.’ So, how to make it less sexy? At the last minute we added a white collar, a kind of punctuation – then it became Carven."

TREND REPORT: How to wear the HOTTEST SPRING 2013 fashions

For Fall/Winter 2012/2013 – the first collection properly shown on a runway – there are some standout pieces but no unnecessary drama. There is a couture-inspired jacket that is cut close to the body and has long slim sleeves and tiny buttons, hitting just above the hip bone – in black or a beguiling blue.

There are short skirts and slim trousers to match, as always. There is a coat in flecked wool with a blue-fleece collar, cut to give a cocoon shape at the back. Suede stilettos have bows on their heels. Simple silk-satin tops twist and drape. You can buy a skirt for about $420 and a top for less; a double-breasted wool coat is about $1,000.

SLIDESHOW: 30 spring HEELS to lust over

"If you like it, fine!" exclaims Henry. "But we won’t push you. I want Carven to be a nice brand. Really…."

If it is so – and it’s hard to say otherwise – you can credit the designer. Like his friends Erdem and Roland Mouret, Henry has retained a sense of perspective.

"I’ve realized that fashion can be full of pleasure, but I’m lucky to share my life with somebody and that’s important. When I leave the studio, I am able to get some distance. I’m proud to be the person I wanted to be when I was a kid – to live in Paris, to do this work. But I am not super-ambitious."

In case you take that the wrong way, he adds: "Not personally. With Carven. I awoke the Sleeping Beauty, and now I am allowing her to lead her own life."