ELLE Canada talks to Calvin Klein's Francisco Costa about the iconic fashion label and the responsibility that comes along with it. 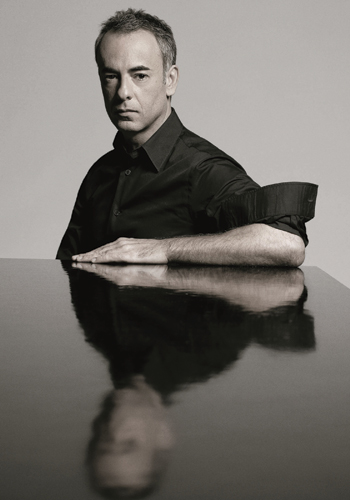 Calvin Klein is a razzle-dazzle fashion empire. The brand, founded 45 years ago as a coat shop by its namesake, is now a $7.6-billion mega-business with fingers in juicy financial pies from accessories to fragrance. On the womenswear side, designer Francisco Costa is the keeper of the label’s creative lifeblood. Originally from Brazil, Costa moved to New York at age 21 and juggled English-language classes and fashion coursework at FIT. He got his start at Oscar de la Renta and then worked at Bill Blass and Tom Ford before taking the helm at Calvin Klein in 2003. A decade into his tenure at one of the world’s most fabled fashion houses, he has racked up a mantelpiece full of awards for his minimalist-meets-textural aesthetic.

Costa talks to us about art, intimidation and how he translated “psychological sexuality” onto the catwalk.

What were your early days at Calvin Klein like?
“I thought of Calvin as being on a completely different level, so it was intimidating! [Laughs] I worked with him for a year, and I learned a lot. He is very pragmatic and decisive, and he takes a lot of risks. He always has—otherwise the company wouldn’t be what it is. He was always ahead of the curve.”

How do you balance staying true to the DNA of the brand while also bringing something new?
“I’m not filling anybody’s shoes—if I’d tried to associate myself with the man and the capacity of his talent, I don’t think I would have been considered! I go my own path, and I try to be as current as possible. It’s my own drive as a creative person to broaden that vision, to innovate. We’re in a different world now.”

How does inspiration work for you?
“It’s a very reductionist process. We go through a tremendous amount of inspira- tion to come up with what is relevant. We look at art—architecture, portrait, film, street. We work in a very collaborative, open environment, so I listen a lot. I try to look deeper into everyone’s sense of what they think is right. Beauty is intrinsic to the brand—it’s my job to be the suitor.”

What excited you most about fall/winter 2013?
“I was inspired by an amazing film called Ivan’s Childhood (1962). There’s one scene in the movie where the protagonist, a girl, is in a beautiful birch forest. She’s having a psychological relationship with an officer, which is tender but very dangerous, and the camera takes it all in: the complexity of their love but also her perfect coat and boots….”

Your fall/winter 2013 coats are beautiful— they’re powerful, almost unapologetic.
“Yes, it’s a very powerful collection. It has edge, but it also reflects a psychological sexuality. There’s a controlled aspect to it. We brought in the idea of rugged, strong-shouldered coats and very skinny boots—a kind of urban sophistication.”

It’s also possibly the sexiest collection you’ve shown.
[Laughs] “It developed into something very sultry but almost severe. Calvin stands for sexiness and beauty—that has always come through in the brand’s famous advertisements. I try to incorporate that into the clothes—to add a curve, a sense of discovery, a layering of ideas.”

Resort 2014 is in stores now. What were your starting points for it?
“I started with texture. I wanted it to be structural and clean with very fresh silhouettes. It’s youthful—our character was like a Californian woman with the spirit of the ’70s. We showed a lot of midriff!” [Laughs]

You’ve said that spring/summer 2014 was a personal collection for you. What did you mean by that?
“The idea was to bring back the inspiration I felt when I first arrived in New York. I wanted the collection to have a patchwork feel of different textures and silhouettes—some very basic shapes, like painter pants and the men’s T-shirt—but with really developed fabric, like hand-woven tweed. There’s also an art influence. I wanted it to feel like there are layers of colours dripping over the skirts. It’s a forward-thinking collection.”

When you look back over the past 10 years, what are you most proud of?
“I’m so happy to work with people who let me loose to create, explore and challenge myself and my customers. It has been a long, amazing journey, but I feel like I haven’t reached puberty yet! [Laughs] I’m 10. What’s to come will be even more amazing.”