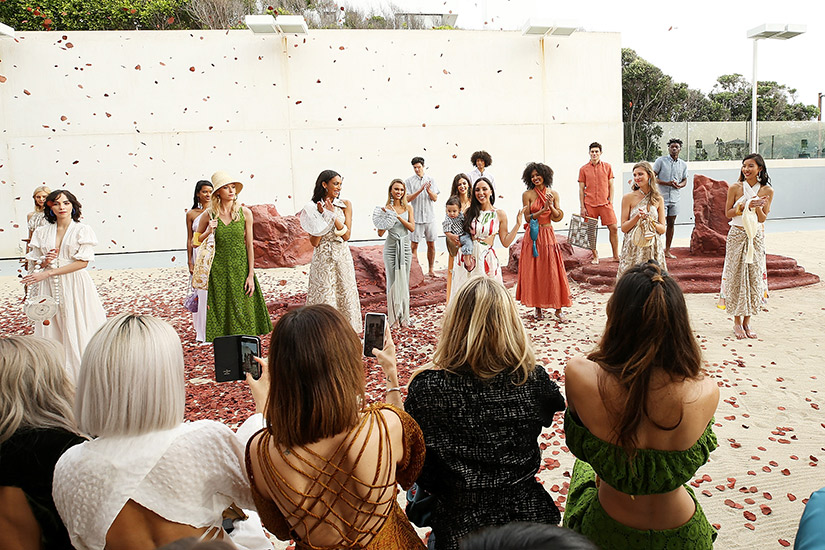 True to its name, Cult Gaia has, well, a cultish following among the fashion set. Most of us likely came to know the brand thanks to its hugely popular bamboo “Ark” bag, which still makes the regular rounds on artfully staged Insta shots years after it’s launch. But the label has grown to include much more than wooden accessories—it’s a fully realized fashion label that encompasses shoes, clothing and bags.

This weekend Cult Gaia staged its first runway show in a Frank Gehry designed house in Los Angeles. Models dressed in fluid, artfully draped dresses walked around a beachside backyard while influencers and celebrities including Olivia Culpo looked on. True to the brand’s online-first roots, each piece in the collection was shoppable and available instantly.

We spoke to Jasmin Larian, Cult Gaia’s founder and designer about the show, the inspiration behind her Resort 2019 collection, and the surprising story behind the Ark bag that helped start it all.

The Ark bag was not an overnight sensation

“At first it didn’t take off and it was kind of surprising to me because I always believed in the product. It took about three years and we put a lot of marketing behind it, we started on social media and putting a lot into content that show people how to wear it. So from there it kind of launched, and Instagram really helped with that.”

The vibe of the brand is Goddess-cool

“It’s about a woman who is super confident and sexy without being super overt. I think that there’s not that hero for us in pop culture really right now so I’m trying to create a woman who’s beautiful and can wear very sexy clothing but it doesn’t feel so obvious. What people say when they wear our clothes is that they feel like a goddess. That’s really what we’re trying to do.”

The timing of the runway show deliberately skipped Fashion Week

“I started my brand online and I never understood why people spent so much money and put so much behind the shows when the product not available until six months later. I felt like the energy kind of died down and it gave an opportunity for high street fashion to basically knock the trend off and deliver it to the consumer before they were able to. It just always made sense to me to deliver something like this when I’m going to drop the collection.”

The show was inspired by Brazilian artist Lane Marinho

“I’ve always been a fan hers and I took a drawing that she did and we made the print. I feel like her work really speaks to our aesthetic in a beautiful way. It feels very earthy, a lot of terracotta, a lot of vibrant colours.  I always think with this collection, when someone asks me, ‘Who is this woman?’ and I say she is of the earth and very alive in her spirit.”