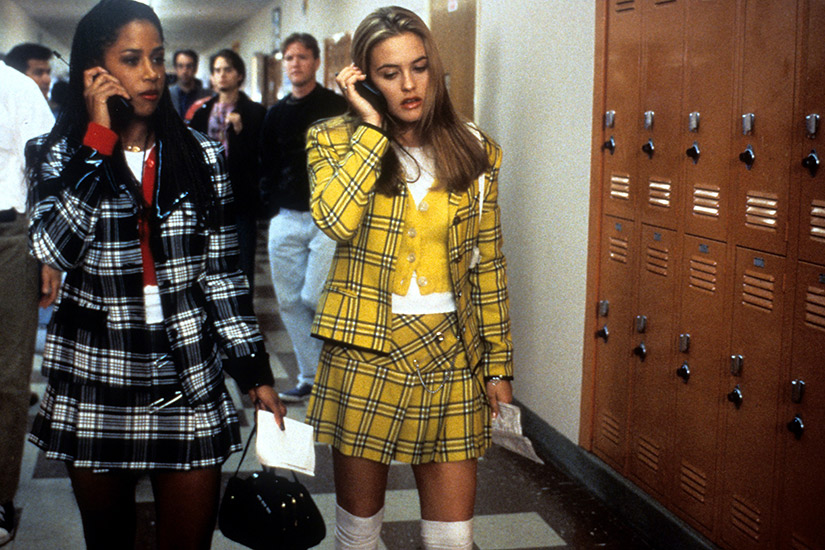 If you first learned about Alaïa from Cher Horrowitz, or wished your prom had a “famous couples throughout history” theme like that of Never Been Kissed, then you’re familiar with Mona May’s work. As the costume designer behind most of the ’90s greatest hits (from Clueless to Romy and Michele’s High School Reunion) May didn’t just tap into the fashion trends of the era– she helped create them and then cemented them in our memories. You’ll never not associate the decade with plaid minis, metallic slip dresses and feather-tipped pens. May gave us confident, happy teenage fashion idols who rocked knee-high socks and exuberant hats, who dressed up for gym class and whose sartorial choices became shorthand for their insecurities and ambitions.

May was in Toronto last week to kick off Gap’s nostalgia-filled #GapLogoRemix collection with a podcast recording with Capsule 98, a celebration of all things pre-millennium. We caught up with May before the event to chat about why the ’90s are actually timeless.

Why are we still so obsessed with the fashion of Clueless?

“Well there’s a lot answers for that. I think one every important one is because [director] Amy Heckerling is a genius. And she wrote a fabulous script that I think really resonated with people. I think the language is amazing. The clothes that I was able to bring to the film are like the characters as well. When we set out to do the movie, at the time there were really no fashion movies before it. There was no fashion on the streets, it was all grunge. It was about taking the fashion from the runways and translating it into the script. The beret, the quintessential schoolgirl skirt but done in acid yellow.”

Did trends move slower at that time? I feel like our attention spans are shorter now when it comes to fashion.

“Yes, but the trends were also bigger. Everyone embraced them. And it was harder, we didn’t have the internet. I had to go and buy books and fashion magazines and really look through it. This was before PR, it wasn’t like Sex and the City, we weren’t getting sent boxes of clothes. We had to buy the Calvin Klein dress.”

That’s one of my favourite looks.

“She had over 60 outfit changes in movie and it was a very specific colour palette in the movie. There was very little black. We did something that was never really done before which was putting together high and low fashion. A mixture of high-end stuff with mall stuff and something that was girly. There are certain things are really timeless, that fit the body really well. And that is important because any character we know, like Romy and Michele, you can make them funny. You have the big boas and have the chainmail dress, but if it fits right, it doesn’t look ridiculous. The costumes are not wearing them.”

Except maybe in Drew Barrymore’s case at the start of Never Been Kissed.

“When she wears the crazy white boa to school. But that kind of supports this physical comedy, when it gets stuck in the cab door.”

And that giant purse with lemons on it!

I mean, hello right? It also gives you that arc, that later when she kind of finds herself, that she really did go through her journey.

And she has her actual literal princess moment in the end. That prom dress is another one of my favourites. Because I think you inserted a period film inside of a ’90s film. That whole prom must have been so fun to costume

“We had hot glue guns, doing the hair accessories for the girls and the big earrings for the boys. It was a lot of fun, but a lot of pressure with budgets and time. But the creativity never stops. And then I loved when she’s standing and waiting for this kiss, she’s in this really pretty pink, floral chiffon dress that we made for Drew. And she was just kind of herself, she found herself. It’s ok to be who she is, you know, because you’re a normal person, not a perfect person. And I think that’s what’s important for audiences to hear, and for girls to hear.”

Maybe we’ve had some distance from the ’90s and now we recognize that it was a timeless fashion decade. But for a long time it was derided.

“Well I think that’s because we remembered the worst parts. The fanny packs.”

So you’re not on board with the new fanny packs happening now?

What are you working on now?

“I am still working with Drew 20 years later on Santa Clarita Diet. And we can still be friends, and she comes out with her daughters, and my dogs play with her dogs and just hang out and have a crazy summer in Santa Clarita, L.A. And I’m lucky to have that career; I’m very lucky to get called for those jobs. I never get called for the cop shows.”

“I always get the creative stuff. Because I mean I bring something to the picture now. You know, it’s just it’s a certain kind of style and a look. I wish more of it could be happening. We don’t have enough of these movies in the world.”

You hear that a lot, what happened to the good rom-coms, the good teenage films.

“What’s coming in now that I think is good is on TV.”

If it wasn’t for Clueless, would our recollection of ’90s fashion be totally different?

“Completely, otherwise it would have been some hideous flower dresses.”