Reebok hit their latest capsule collection out of the park. 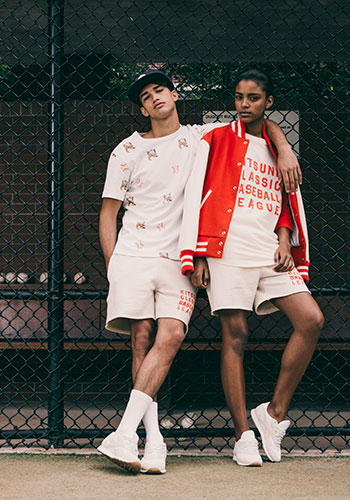 I’m a little bored as I watch the Blue Jays take on the Orioles on a scorching day in Toronto (I’m what true fans call a “bandwagoner”), so my eyes drift toward the stands. The 50,000-strong crowd is a blur of blue and white. But I’m not sporting the home team’s colours. I’m wearing orange, and instead of a Blue Jay on my sleeve, little foxes dot my t-shirt. I’m wearing the Maison Kitsuné capsule collection for Reebok. The 8-piece line includes a letterman jacket, a raglan tee and flat brimmed cap. And it’s all inspired by baseball: the old-school swagger of the New York Giants and the Brooklyn Dodgers, preserved in crumpled trading cards and sepia-toned photos.

Like any good collaboration, the two parties (in this case an athletic mega-brand and the arbiter of Japanese cool) share some common ground: baseball, fashion and music. During a whirlwind week in Japan to kick-off Reebok’s partnership with Japanese brand Maison Kitsuné, I got to cover all three of these bases.

Baseball
I’m standing on home plate at Meiji Jingu Stadium in Tokyo and getting a crash course in hitting from my Kōchi (coach). Despite my best efforts, I’m not destined for the major leagues. But Maison Kitsuné co-founder Masaya Kuroki makes me feel better about striking out. “As a kid, I wasn’t very good. I was always on the bench watching my friends,” he tells me when we chat after the practice. Kuroki also believes in inclusion: “The next step of sports should be men and women playing together.” That’s why the collection he dreamed up is unisex.

Fashion
“The whole idea has to be fun,” says Kuroki, wearing the letterman jacket made with Reebok’s high-tech felt and a flat brimmed cap adorned with a flocked baseball. “You might be wondering why I chose this orange colour but I can’t remember!” He laughs, admitting that it was probably the sunny days at the Reebok sample room in Barcelona that inspired the punchy hue.

“Growing up in Paris, I used to wear white Classics in high school, but this time I wanted to play with the different materials and order them in different ways.” Kuroki says as he holds up the reimagined Classic shoe, done in a mix of suede, mesh and patent in tones of grey and nude. Fittingly, the shoe is called Arctic Fox and the success of its initial release (it sold out in minutes) paved the way for the rest of the collection.

Music
Music runs through the veins of both brands. Reebok was the first athletic brand to collaborate with a musician (Jay Z in 2002) while Kitsuné is equal parts fashion brand and music label—they signed MS MR, La Roux and Hot Chip, just to name a few.

Kuroki invites me to attend a Kitsuné Club Night, a globetrotting party series that brings A-List DJs and good vibes to stylish crowds in the world’s coolest spots. This one’s in Osaka, so I hop on a bullet train to check it out.

The sun is just starting to set as I arrive in Osaka, and the streets are turning neon. I throw on a pair of Reebok kicks and make my way past the crowds of Friday night fun-seekers to the venue, Club Onzieme, where I shimmy to DJ Todd Edwards’ set until PM turns to AM. On the walk back to my hotel I look down at my wrist, which bears a temporary tattoo of a fox. Like my memories of Japan, I never want it to fade.