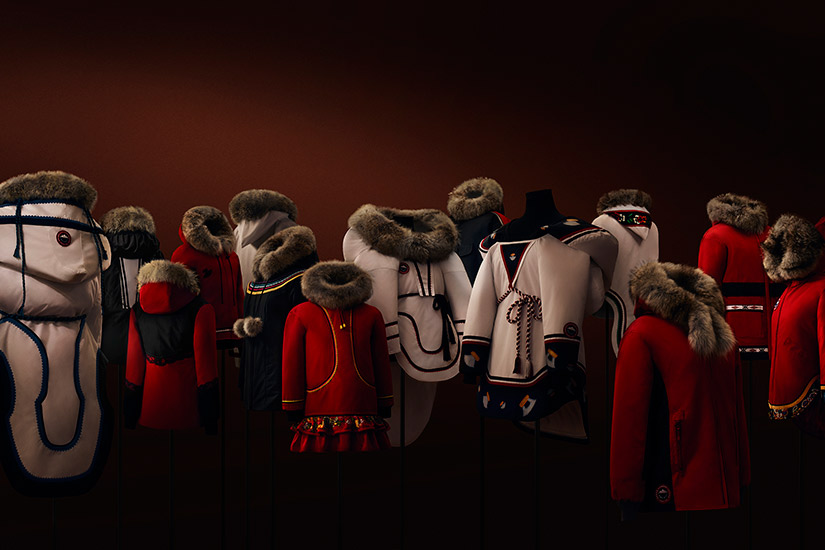 Is there a better time than in the middle of a harsh polar vortex to debut a new line of Canada Goose parkas—especially ones designed by Inuit seamstresses? We think not.

Luckily, that’s exactly the position we found ourselves in freezing-cold New York (seriously, temperatures got as low as 2 degrees Fahrenheit, with the wind making it feel like -17 degrees—or -27 degrees Celsius) for the brand’s launch of its newest exclusive collection, Project Atigi.

“It’s colder here than where I’m from,” laughs Jennifer Munick, one of the designers who lives in Kuujjuaq, Quebec. “I’m like, ‘Yay, finally somewhere colder than home!’ I screenshot the weather forecast and posted it on Facebook [to show my friends].”

For Project Atigi (the Inuktitut word for “parka”), Canada Goose partnered with 14 seamstresses across Inuit regions in Canada—Inuvialuit, Nunatsiavut, Nunavut and Nunavik—to create bespoke parkas using the brand’s materials. It’s also an opportunity to showcase the craftsmanship of Inuit women—who the brand points out are the original parka makers, after all.

“To us, authenticity is everything,” Canada Goose CEO Dani Reiss told us at the launch. “There’s nothing more authentic than a parka sewn by hand by somebody who’s had this knowledge passed down over generations. I think it’s really powerful.”

Munick—who also is an activist and community leader—was one of five designers who made the trip to NYC to celebrate Project Atigi. She designed her parka specifically with young girls in mind, using an old family pattern created by her grandmother. “It’s also inspired by the western arctic,” Munick, who’s been sewing herself since she was five years old, said. The design—the little frill on the bottom—I grew up with parkas like that.”

Jennifer Munick’s parka is rich with family history and tradition. Inspired by an old family pattern that belonged to her grandmother, her parka is intended to be worn by a young girl. Jennifer wanted to use her #ProjectAtigi parka as a platform to tell her family’s story, which is why she added the floral skirt embellishment in memory of her late grandmother. Learn more about Jennifer’s design and view the collection via link in bio. #HonouringtheNorth

All proceeds from the sale of the limited-edition collection (now at canadagoose.com, price upon request) are being donated to Inuit Tapiriit Kanatami (ITK), a non-profit that works with over 60,000 Inuit people, advocating for and promoting Inuit health and well-being. For Munick, supporting Inuit communities across Canada’s north is a key piece of Project Atigi.

“It was very fun, very stressful, a lot of pressure. But I’m glad I did it,” says Munick. “I did it for Inuit people. I try to be a good activist for my people. I really hope that this will be a very positive message for Inuit women, and that we inspire young Inuit young sewers.”