Can you wear a trend the second time around?

If you wore ’90s and early 2000s fashions the first time around, can you rock them again? 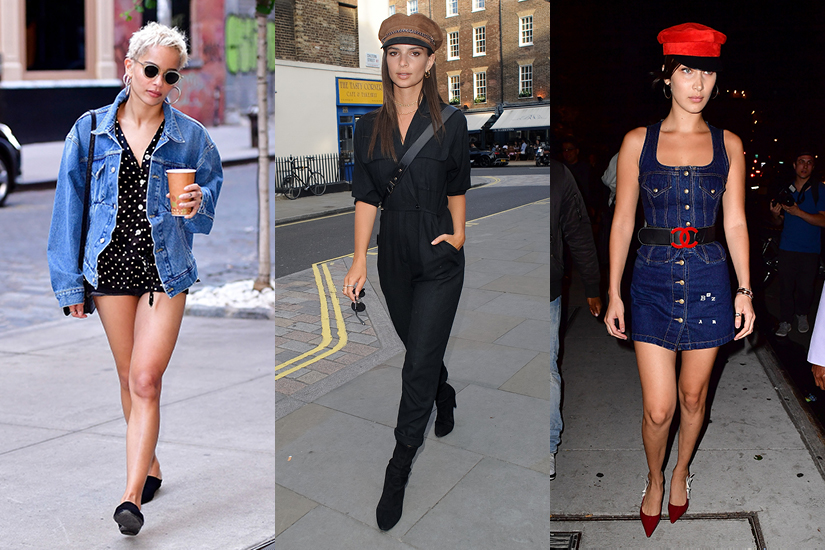 If you wore it the last time it was fashionable, you can’t wear it when it comes back: That’s the ironclad style rule I was raised with. Did you wear denim on denim when Kate Moss modelled it for Calvin Klein in 1996? Then you’re not in the right age bracket to don the Canadian tuxedo that Raf Simons re-tweaked for fall 2017. Were you around when Tom Ford debuted velvet hip-huggers at Gucci? Then you’re too old to pull off this season’s Tibi and Altuzarra iterations. This rule applies to accessories too. When the choker returned to the runway at Balmain and Givenchy for spring 2015, I skipped it despite my obsession with statement jewellery. I had worn a velvet choker in the ’90s, when I was a teen; the idea of putting one on again made me feel a little silly – like I was trying to recapture my youth (which, yes, sounds ridiculous since I’m only in my mid-30s).

Then I came across a photo of Yolanda Hadid, 53, wearing a pair of her supermodel – and 20-year-old – daughter Bella’s high-waisted ’80s-inspired True Religion mullet-hem jeans and I began to question my motto (and also wonder how Mama Hadid could fit into a sample size). Was my focus on my age holding me back from revisiting some of my previously beloved looks, or was it something else?

To find out, I turned to Dawnn Karen, a New York-based fashion psychologist who studies the effect of style on behaviour. “Think about the experience that you associate with a particular trend,” she says. “Clothing is a marker of where we are in life and where we were in life, and we may not want to revisit that time. It happens on a subconscious level.” As a teen, I had braces and frizzy hair and my chest was so flat it was practically concave. It’s no mystery why I’m hesitant to take a trip down fashion memory lane, yet clearly a part of me still pines for the past. Clueless alumna Alicia Silverstone’s 2017 campaign for Club Monaco comes to mind. Seeing my first fashion hero, Cher Horowitz, clad in the crested logo that filled my high-school halls gave me major warm fuzzies.

“Nostalgia plays a factor [in how we dress],” says Julie Yoo, owner of Toronto consignment boutique I Miss You. “I find that people gravitate toward the eras when they were too young to participate in fashion. They remember their older sisters or aunts dressing a certain way, so when they grow up, they’re attracted to that.” Perhaps that’s why millennials like Zoë Kravitz, Emily Ratajkowski and the Hadids have embraced ’90s staples like Levi’s 501s, round wire-frame sunglasses and Doc Martens. They’ve only seen these trends on their moms or on reruns of Beverly Hills 90210 (the original), so they don’t experience the same awkward-years flashbacks as I do. To them, it’s the fashion equivalent of a clean slate.

“Each time people circle back [to a trend], that particular generation puts their own spin on it,” says Karen. Take fishnet stockings. These upped the risqué factor for burlesque dancers in the 1930s. Two decades later, Elizabeth Taylor and Audrey Hepburn gave back-seamed stockings a semi-saccharine touch by wearing them with pumps and dainty ballet flats. Vivienne Westwood introduced them to the ’70s punk scene by pairing them with chunky combat boots. This year, Jason Wu showed them with patent and suede glove shoes, while street-style stars have co-opted them to wear with Stan Smiths. We may not have worn fishnets the first, second or third time around, but there’s no denying the excitement behind a new generation getting their hands (er, legs?) on them and presenting them in a different light.

A chance to reinterpret the past is perhaps why designers keep revisiting the 1960s. A palpable hunger for social and political change was in the air then – as it is in today’s era of wokeness: It feels like a shakeup of the status quo is just around the corner, echoing the revolutionary spirit of the swinging ’60s. “It was a very hopeful and exciting time,” says Alexandra Palmer, a senior curator at the Royal Ontario Museum who works with fashion and textiles. “Designers like to revisit things in that mod way to evoke a kind of hopeful future.” Fall’s runways mirrored that sentiment. At Chloé, Clare Waight Keller referenced the “psychedelic optimism” of the ’60s with prints of poppies, and Chanel embraced its opportunity-filled space-age vibe with foil-esque puffy capes and Barbarella hair. Gucci’s fall campaign took the decade’s sci-fi vibe one step further with Star Trek-inspired aliens decked out in its latest collection.

In addition to these throwbacks is the proliferation of styles we’ve barely had a chance to clear out of our closets from the first time we wore them. In 1937, British fashion historian James Laver said that it takes 50 years for a trend to come back. Today, clothes go from in to out to back in again much faster. Chanel turned boots into pants on its fall 2005 runway (and Anne Hathaway made them a thing in The Devil Wears Prada). They returned to our collective consciousness a few years later (thanks to designers like 3.1 Phillip Lim and Givenchy) and are front and centre again for fall 2017 c/o Olivier Rousteing’s python boot leggings for Balmain. There were hardly any dresses in the 2008 Sex and the City movie – or in our aughties club outfits, for that matter – that didn’t come cinched with a wide belt. Seven years later, the wide belt is once again being hailed as the accessory of the season. (See Louis Vuitton, Hermès and Tanya Taylor.) And the structured top-handled purses seen this fall at Gucci and Coach 1941 are echoes of the ladylike doctor’s bags at Prada and Marni in 2012. The loop on nostalgia is literally zipped.

Perhaps it’s our goldfish attention span: Blink and there’s something new to covet on social media. Life and trends seem to move faster than ever. Or it’s because we like what we know. “Familiarity is safe,” says Karen. (And profitable.) It’s also true that designers – Rei Kawakubo aside – can’t exactly reinvent the wheel every season. There simply aren’t enough days between shows. It’s only a matter of time before what’s old is new again…again. “The pressure to design something new and radical is enormous, and it’s not going to happen that often,” says Palmer. “[For example], hemlines move, but the drama is not there anymore like [it was] with the miniskirt. Fashion is an evolution, not a revolution.” I decide to adapt that philosophy to my own life, a concept I’m sure Mrs. Hadid can relate to as she selectively raids her daughters’ closets. I’m not going to pull out my old Docs and buy mom jeans and a choker. But, armed with a hair straightener and minus the metal mouth, I can combine my vintage Levi’s cut-offs with my Miu Miu heels and my favourite Theory blazer. “Trends can transcend age,” says Yoo. “It’s about how you wear something and your individual style.” And, after all, everything deserves a second (or third) chance.