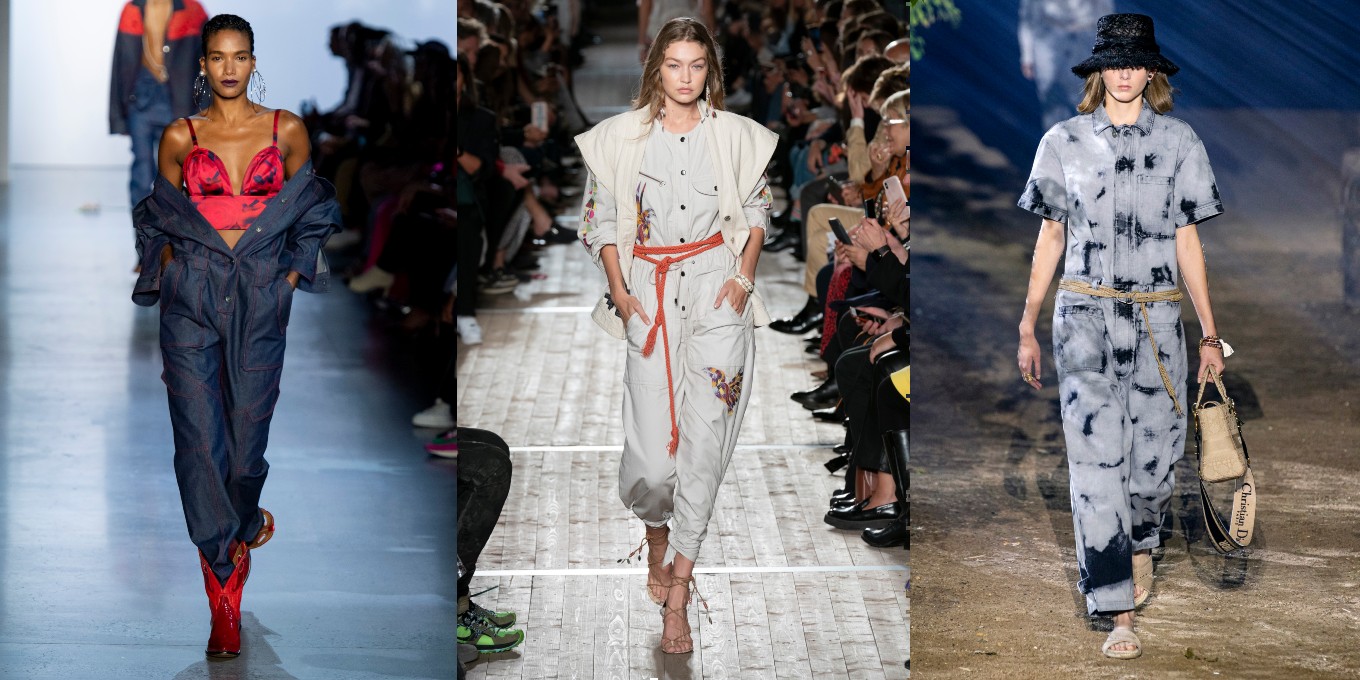 Today you’re more likely to encounter a boiler suit at your neighbourhood café paired with a laptop and an oat-milk latte than in a bomb shelter with a flashlight and gas mask. But when Italian designer Elsa Schiaparelli debuted her spring/summer collection in October 1939 in Paris – just a month after the Second World War began – the woollen boiler suits she showed in a variety of colours were meant to be left folded on a chair next to one’s bed so they could be put on quickly in case of an air raid. In her 1954 autobiography, Shocking Life, the designer explained that it “was the ‘cash and carry’ collection with huge pockets everywhere so that a woman, obliged to leave home in a hurry or to go on duty without a bag, could pack all that was necessary to her.” A few years later, the soon-to-be-iconic image of Rosie the Riveter appeared as part of a government campaign to recruit more women into the workforce. Wearing a polka-dot handkerchief that secured her hair, a bright-blue boiler suit with the sleeves rolled up and a resolute gaze, she would later become the icon of a long journey toward equality and independence.

Today, trendsetters from Stella McCartney to Mytheresa fashion buying director Tiffany Hsu and celebrities from Zendaya to Jessica Alba are all sporting boiler suits on the regular. Perhaps the humble one-piece has resurged because in our prevailing hustle culture, where maximum productivity is the goal, it’s the ultimate expression of efficiency: a complete and comfortable outfit that can be chicly pulled together in seconds with minimal thought or effort. 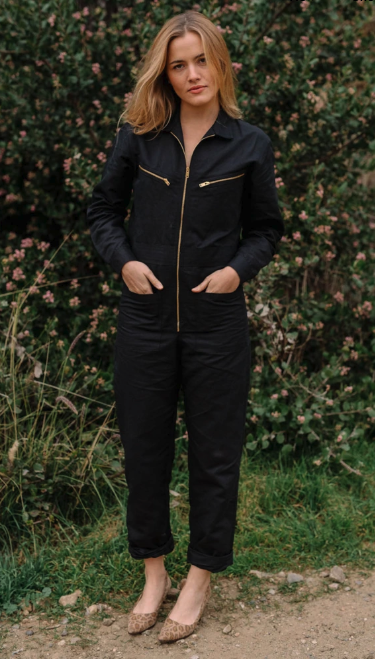 Long before the boiler suit was shown at fashion week, it was a staple on the factory floor. Loose-fitting and made of durable materials like canvas and denim, it protected workers from the grit and grime that defined the advent of the Industrial Revolution. The coverall design exploded everywhere, from the racetrack, where it was the favoured uniform of mechanics and drivers, to the sky, where paratroopers wore it in flight, and eventually even space – the high-tech G-suit was developed for astronauts and military pilots.

With a focus on function in times of need, boiler suits, it seems, have served as a reflection of the most pressing issues of the day. And this season is no exception, with designers using the boiler suit as a launching pad for exploring what matters to us now, from environmental issues to self-expression. For Dior’s spring/summer 2020 collection, Maria Grazia Chiuri found inspiration in the story of Catherine Dior – Christian’s sister – a devoted gardener. Models wore colourfully dyed ombré and acid-wash boiler suits with raffia sun hats as they walked through a makeshift orchard, as if headed for a day in the dirt instead of a lap around the Paris Longchamp Hippodrome. The final look was less about a hobby and more about living in the Anthropocene era, questioning how we can re-establish balance with nature. Phillip Lim riffed on the same theme by opting for sustainable materials like organic cotton for his take on one-piece dressing.

“In these times of political turbulence, with a pressing climate crisis and the weight of a new decade upon us, it’s no surprise that the garment is enjoying a renaissance.”

The boiler suit, with its universal silhouette and easy fit, is the epitome of fluidity – a sartorial blank canvas for whomever you want to be – which is clearly important given the 52 percent increase in searches for “genderless” and “gender neutral” fashion, according to fashion search engine Lyst. Indeed, for his 10th anniversary, Prabal Gurung reflected on identity by posing a single question – “Who gets to be American?”—as Dominican model Arlenis Sosa sauntered down the runway in a Western- inspired denim take on the boiler suit, complete with bold-red cowboy boots. Across the pond, Emilia Wickstead turned to the classic novel Little Women, using the different personalities of the March sisters to anchor her romantic looks, such as a soft peach suit-inspired boiler suit with billowing sleeves that would look as fabulous on Timothée Chalamet as it would on Saoirse Ronan.

Elsewhere, designers elevated the effortless nature of the boiler suit with sleek tailoring and joyful styling. Pleated, short-sleeved cotton boiler suits in shades of muted grey and bubble-gum pink at Roksanda felt casually elegant and wouldn’t be out of place at the opening of an art exhibit. Fantasies of an endless summer ruled at Zimmermann, with an oversized pastel suit nonchalantly zipped to the navel, showing the slightest hint of a bikini top. And in Paris, supermodels Gigi Hadid and Amber Valletta walked the runway wearing Isabel Marant’s boho vacation-ready designs – rope belt, lace-up sandals and puka-shell bracelets included.

In these times of political turbulence, with a pressing climate crisis and the weight of a new decade upon us, it’s no surprise that the garment is enjoying a renaissance. “Today’s fashion is not just about making clothes,” reflects Chiuri. “[It’s] also about asking questions, finding creative ways to build a consciousness, to pay more attention to what we do.” The boiler suit remains an armour for navigating the world – one that allows us to be bolder and have the confidence to know that, maybe, we can do it. 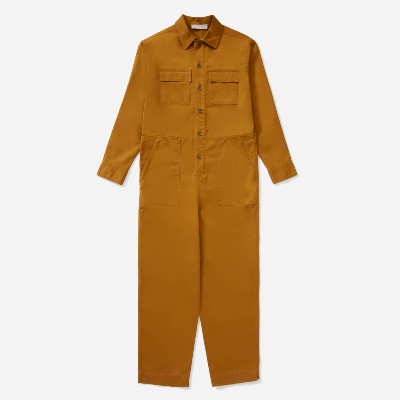 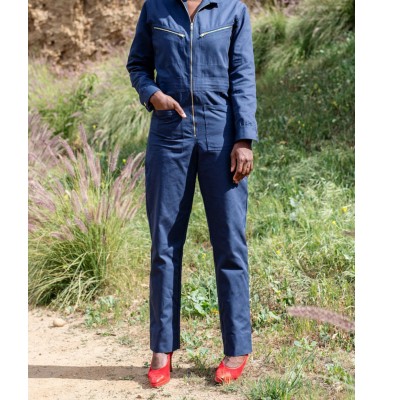 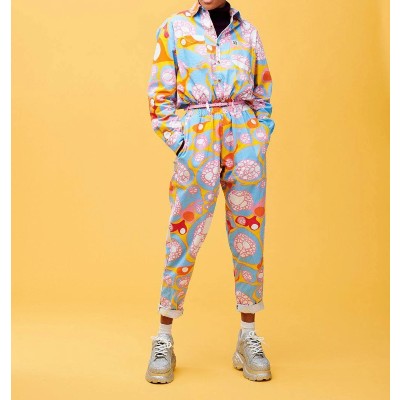 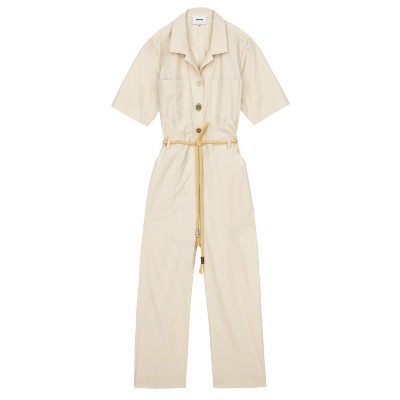 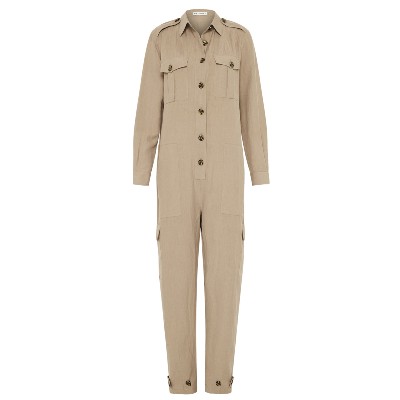 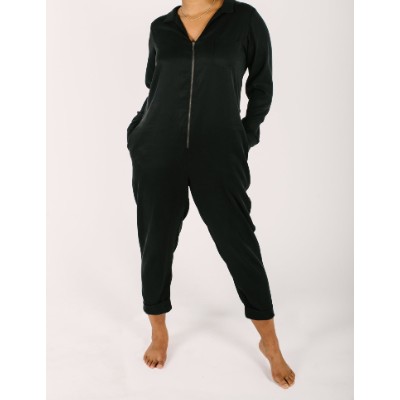 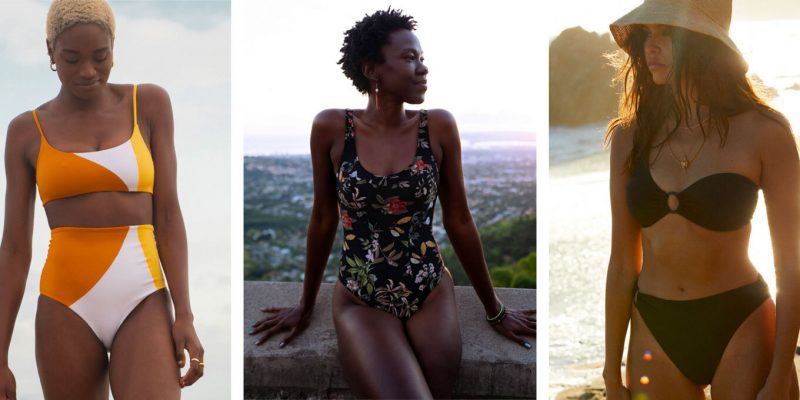 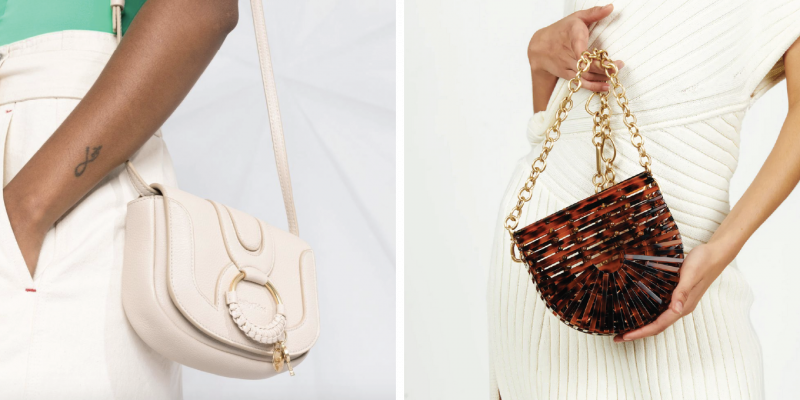