Ashley Graham: A plus-size model on the rise

Is the fashion world finally ready for plus-size model Ashley Graham? The emerging star chats about beauty, career and her BFF Crystal Renn. 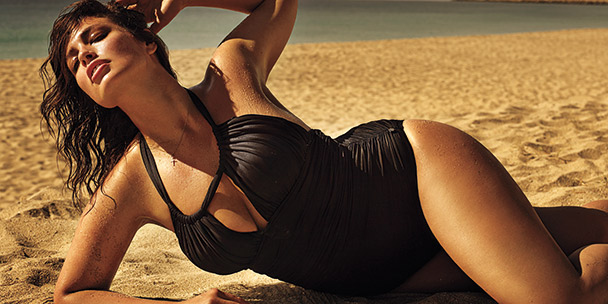 Fashion is full of skinny-marinks, but the freshest face of the season boasts a fuller silhouette—as well as feline brown eyes, a megawatt smile and cheekbones for days. Ashley Graham, 27, has ruled the plus-size world for a decade. Now, as the modelling industry (finally) appears ready to embrace a broader definition of beauty, Graham has her eyes on the supermodel prize. And why not? She has already worked with David Sims, Katie Grand, Sølve Sundsbø and, most recently, Carine Roitfeld. “I want to get to the next level, next level, next level,” says Graham.

MUST-READ: Can feminism really be a FASHION TREND?

What was the plus-size modelling in- dustry like when you started?
“At first, I didn’t get the difference because I was so young. As I got older, I realized ‘Oh, I’m one of the “big girls,” the ones who aren’t quite accepted’—that opened my eyes a lot.”

Is there more respect now?
“I have never felt disrespected as a plus-size model—it was mainly in the high-end world where I felt like I didn’t belong. But it has changed immensely over the past five years. There are [plus-size] girls on covers, in editorials and in makeup campaigns. High-end designers like Donna Karan, Michael Kors and Calvin Klein are doing plus-size collections.”

Why do you think it has changed?
“The average American woman is size 12 to 14, so if you aren’t catering to the average woman, you’re catering to a small group of people. [Designers] realize that—and they want to make money.”

What have you learned from trail­ blazers like Crystal Renn?
“Crystal is actually one of my best friends. I have some of the best moves because of her! We’d stand in front of the mirror naked together and she’d say ‘This is how you manipulate your body.’”

What’s next?
“I love how Cindy Crawford wasn’t just a face—she actually created a brand. That is something I really admire and want to work my way up to…. Maybe in five or 10 years there’ll be an Ashley Graham Show, but there’s an Ashley Graham Show happening right now, in my apartment in Brooklyn!”