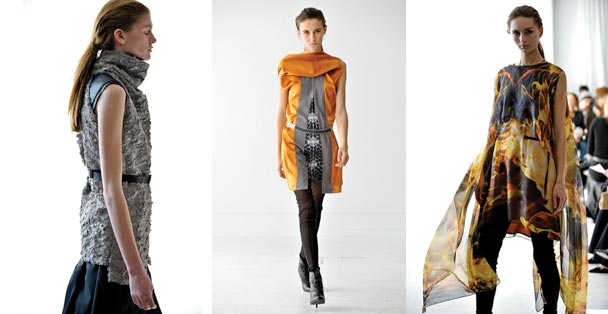 Canadian designer Jeremy Laing has jet-setted around the world showcasing his incredible talent to the world, but as his most recent project demonstrates, the 29-year-old Toronto resident has exacted a fine balance between international press and national pride.

Freshly plucked from the runway, Laing has selected looks from his fall/winter 2009 collection to outfit staff of the Canadian Pavilion for the lavish Canada Party at this year’s International Art Exhibition-La Biennale di Venezia, running June 7 till November 22. “It’s a big honour,” gushes Laing in a telephone interview the day before his departure to Italy. “It’s the first time that anyone has really collaborated in this way for the Biennale.”

Traveling to Venice by way of the luscious Florentine countryside, the designer is anxious to both visit the biennale for the first time and to behold the affinity between his "sober" collection and the works of the pavilion’s featured artist Mark Lewis, at the world’s oldest and most esteemed exhibition of contemporary art. "I think aesthetically they have a lot in common," says Laing of the pairing. "There’s some parallels with [Mark’s] subject matter and my approach to garment constructions."

For a designer boasting commendations from fashion bibles style.com and Women’s Wear Daily, Laing’s enthusiasm for his partnership with the Canadian Pavilion is refreshing, if not a little surprising.

Though Toronto-based, Laing’s career has largely unfolded on foreign soil, and intentionally so. "It was something we aimed to do in the beginning, just in terms of accessing out a much broader market than there is domestically." While "friendly with a few" Canadian designers, professionally he admires designers from the Belgium school, as well as some of the up-and-comers on the
New York scene including Ohne Titel.

Like Titel, New York Fashion Week is Laing’s runway of choice, even still, the designer champions his hometown’s contribution to international fashion. "I think they’re doing a really good job planning and hosting and putting on Fashion Week," Laing says of the FDCC. "There’s not really anyone else who can do that or certainly no one else who was doing it."

The process of getting fashion out onto the market is a fascination of Laing’s; in fact, his passion for the business behind the brand arguably trumps that for fashion itself. "It isn’t only the design that is important or inspiring to me, it’s probably the least," affirms Laing. "I find approach and process and integrity to be equally if not more important."

Find out where Laing find’s his inspiration

Savvy business sense has become paramount in these recessionary times, a reality Laing explains to have hit fashion houses as hard as retailers. "I don’t think it’s business as usual at all," says the designer when asked about the economy. "I think everyone is really focusing on how better to do business and how to bring things to the customer and how to be more efficient and how to be more cost effective." Laing’s own label is reexamining everything against the status quo, from promotion to showing to the size of the collection. "We’re looking at every aspect of the business and seeing where our market is being underexplored and how can we better serve the stores," he shares.

The business of designer
Dries Van Noten has been particularly inspiring to Laing, as has the Belgian couturier’s approach to fashion. Praises Laing: "I like people who have a personal signature, who aren’t really swayed by trend, who have an artful and thoughtful way of doing things."

The signature of Laing’s own oeuvre is rooted in the classic
tailoring, beginning with the patterns, constructed and cut by the designer himself. "It’s something I’m really focused on personally, I normally do all my patterns," he explains. "I’m very involved in the process of creating the shape and the construction, which is not entirely typical internationally but I think it’s important and gives the work a specific result and it tends to be the working method of people I admire."

Like those Laing admires, the international fashion media has lionized the designer for the sui generis nature of his vision. And, as seen in his collaboration with the Canadian Pavilion and his stunning
fall/winter 2009 ad campaign featuring Canadian model Heather Marks, however globalized Laing’s career has become, it continues to be streaked with a charming sense of Northern patriotism.