Are you ready to party?

Designers are bringing back the club kid. 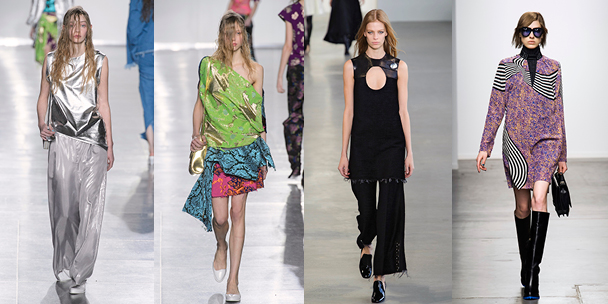 When I used to dress up on Saturday nights and step out of my apartment, I felt as if I were stepping out of a five-star hotel and into a sea of paparazzi, their flashes going off all around me. It was the 1990s, and I was very young and very happy.

I would march along Montreal’s busy streets, my arms linked with those of my friends. I always struck up friendships with the most creative and charismatic people I could find – the ones who treated conversations at a 24-hour diner like they were Truman Capote on a late-night talk show. It felt as if we’d end up in the tabloids the next day, our quips in quotations under our fabulously chic photos. And why shouldn’t we feel famous and powerful? We were part of a brand-new generation, redefining the way the world was going to look.

I went dancing at all of the clubs: the one that used to be a post office, the one that used to be a famous theatre in the 1920s, the illegal one above a grocery store. I put wild outfits together so that I’d stand out in a crowd of clubgoers who were also doing their best to stand out. I threw my clothes together with a carefully crafted eccentricity that can only be pulled off by a 20-year-old with fearless style and an over-the-top sense of self.

For a while, I rocked the young Gloria Steinem look, wearing pieces I’d found in a box of my mother’s clothes from the 1970s. On one occasion, I went to a club wearing a Zorro mask with my hair sprayed silver. I appropriated my appearance from just about everywhere: history, paperback classics, comic books, photographs of David Bowie and fashion magazines.

Looking at the runway collections this season, I was once again reminded of those electric, snazzy nights of blue boots and long hair. There was a happy and brave collage of looks, which designers assembled taking cues from the nightclub scenes of different dec­ades. Their borrowing, however, was not merely an exercise in sentimentality; it was more of a reimagination of the “club kid’s” transgressive sense of style.

Calvin Klein’s show was set to the tune of “Venus in Furs” by the Velvet Underground. And, true to the late ’60s soundtrack, the models came out dressed in miniskirts and maxidresses, swingy culottes and jumpsuits and knee-high boots and Mary Janes. They looked as if they might be headed to Max’s Kansas City – the famous gathering spot for A-list musicians, poets, artists and politicians who wanted to party – to cram into a booth with Andy Warhol.

The models at Karen Walker strutted out in wild flared pants, wide butterfly collars, dark-denim jumpers, shearling coats and big sunglasses, looking like they’d just stepped out of Studio 54 in the 1970s after having had a tiff with Mick Jagger. “We’ve been inspired by everything from ’70s afternoon TV to eccentric English gardeners, superheroes, ’70s dance subcultures and suffragettes,” explains Walker. “My style, as a young woman, was a combination of my mother’s glamorous ’70s wardrobe, vintage and things I made myself. The whole reason I got into fashion was because I couldn’t find things I wanted to buy. I never placed any limits on my experimentation with clothes, especially as a much younger person when a night started at 1 a.m.”

Vivienne Westwood tapped into the ’80s, bringing back that decade’s iconic oversized blazers, parachute pants, enormous shoulder pads and outrageous colour patterns. At Marques’Almeida, the frayed and mismatched metallics and asymmetrical pieces had ’90s flair with a new rave edge, giving models the look of having partied too hard. “It’s like the girls have been out dancing all night, sweated lots, put a hat on, fallen asleep on the bus home and then taken the hat off,” explains Duffy, the lead hairstylist.

The mood on the catwalk was fearless, which is precisely what defined nightclub culture, especially in the ’90s: The rules of dressing dissolved, leaving the dance floor open to anyone and everyone with an imagination and a glue gun. Tiga, a DJ and legendary club promoter who has been attending dance parties since he was five years old in Goa, India, and later as a teenager in Montreal, recalls a distinct DIY style of clothing that flooded his Montreal club, Sona, in the ’90s. He remembers a man dancing with a bottle fixed to his head and a man who was dressed only in tight briefs. “There was a mix-up of styles because people were trying to figure it out live, in real time,” he says.

Once, in an homage to Wim Wenders’ Wings of Desire, I put on a white silk slip with tattered lace trim and a pair of large feathered wings. I felt like I wasn’t being told what to wear, that I was celebrating being alive in that time and in that place. I, too, was inventing the era with a staple gun and five-dollar wings from the costume store. We were all fashion designers, with our peculiar influences and philosophies, building our own identities one outfit at a time.

The club-scene revival that appeared on runways is not a mere dressing game; it’s a retro revival that’s really a call to action. “Take more chances!” it screams. “Let loose!” it booms. “People’s threshold for originality has plummeted,” says Tiga, blaming social media and the hyper-availability of any and all sources of inspiration for the predictable uniform that today’s nightlife fauna has adopted. “In the ’80s, I wanted to look like Duran Duran,” he explains. “If you were 11 [and lived] in Montreal, you had a tiny little photo on the back of an album, a page in a magazine and a music video to amalgamate a facsimile of what they looked like. Now, with Instagram and the Internet, you can find whatever you want.” The accidental originality that resulted from limited resources and unlimited imagination is dwindling, he says. But there’s hope: “There’s still always a minority who are finding original ways to dress,” he says. The proof is on the catwalk.

It’s that very idea of fashion ingenuity that designers are bringing back as they recreate a century’s worth of parties, inviting the wildest participants from each decade to march down the runway again. In an interview with The Huffington Post, William Noguchi, New York nightlife personality and visual manager at Patricia Field, declared, “I like to think that whoever had the first party in New York invited all the people that were the pure raw forms of these different styles of people and everyone has been trying to recreate that fabulous party since then.” With the unabashed and idiosyncratic use of costume, designers have set the stage for the return of the club kid — the unwitting fashion icon who will stop at nothing to get noticed for not dressing the part.

This article originally appeared in the October 2015 issue of ELLE Canada.

READ MORE:
Are Swedish girls the new style icons?
Swap your backpack for these cool carryalls this season
Where to shop in Toronto: Our editors’ favourite stores