All eyes are on micro-sunglasses this season

Why we are suddenly obsessed with this retro look. 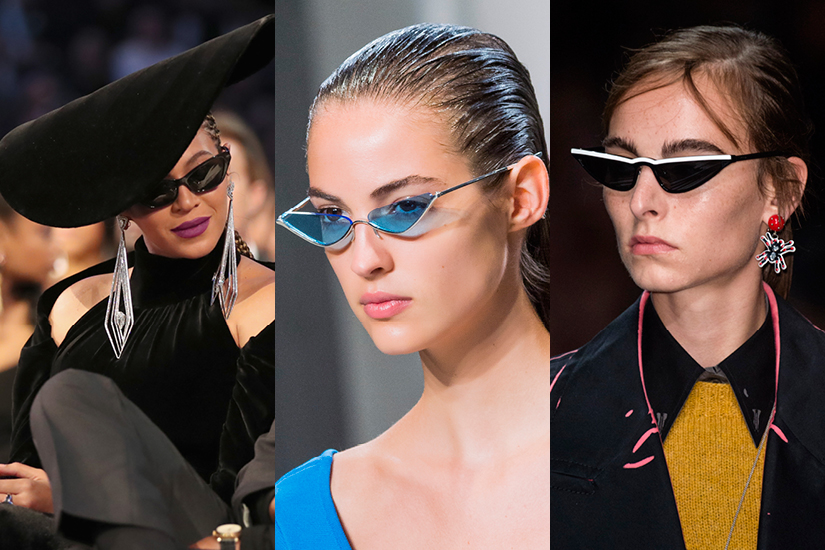 This summer’s shades are perched on our noses, yes, but also between the past and the present. At Maison Margiela, Prada and Louis Vuitton’s spring/summer shows, the sunglasses were ’50s futuristic: a throwback to crazy-lady cat-eyes tweaked with a bit of Tron. The techno-rockabilly look is compact but elongated with a quirky upsweep that hints at an expansive, even bohemian, sense of fun—not clean and lean à la The Matrix. Less whim-sical but of similar diameter and geometry are the Off-White c/o Virgil Abloh sun specs. “I’ve been seeing micro-sunglasses every-where since last year—on fashion bloggers, at the shows—I feel they’re very ’90s,” says Florencia Oriot of Paris vintage shop Chinemachine. She swears that
every time she gets a pair in, she sells them right away. Kanye West is certainly on board with the teensy trend. “He sent me a whole email, like, ‘You cannot wear big glasses anymore. It’s all about tiny little glasses,’” recalled Kim Kardashian on a recent episode of Keeping Up with the Kardashians, claiming he forwarded her “a million” inspo photos.

Mini-sunglasses revivalists don’t take the look all the way back to the Eisenhower era; they give credit to Kurt Cobain and his oval white-rimmed night goggles. Other glasses, like the ones at Prabal Gurung, have such shrunken ovoid frames that they barely cover the eyes, which makes one ask what these sunglasses are for if they don’t shield from prying eyes or ultra-violet rays. They’re even more high fashion when not opaque but, rather, lightly tinted so the eyes are totally visible. At Prada, the cat-eyes are so abbreviated that they’re sharp at the corners and, consequently, slightly dangerous. But Bella Hadid, Kendall Jenner and Rihanna don’t seem to care: They’re gigantic fans of tiny shades, which are the ocular version, if you will, of the itsy-bitsy, teeny-weeny yellow polka-dot bikini, minus the yellow and the polka dots but with all of the minimalism. Lethally angled and best worn with eyes peeking over the top, this season’s sunglasses are admittedly not for everyone. “It depends on your face,” says Oriot sagely. “They don’t look good on me, but they look good on rounder faces.” Also key: the right frame of mind.

How to choose a pair that’s right for you: “The smaller Matrix-style complements a longer, narrower face, while the cat-eye versions are best for a roudner face. They’re meant to accessorize, so be bold and rock red or white acetate versions to really pop some colour into your everyday all-black wardrobe.” — Brian Etcovitch, Vintage Frames Company, Montreal.