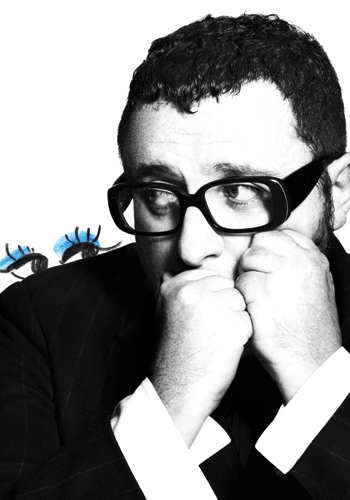 In the kiss-kiss fantasia of fashion, Alber Elbaz is as rare as a unicorn: a designer who loves his profession enough to point out when the emperor has no clothes. He once told his friend Natalie Portman to only wear flats. (“You’re short. It’s much cooler not to pretend.”) On the subject of luxury, he is similarly honest. “A boutique where everything is perfect and the staff look like models is rather like a pharmacy,” he muses. “True luxury is about making people laugh and smile and say ‘I want that!’ It’s not about creating an army of clones that eat the same things in the same places and share the same aspirations. It’s about giving people a reason to feel that bit happier.”

ARTICL: Fashion DESIGNERS to watch in 2013

Elbaz has been spreading joy at Lanvin—the world’s oldest fashion house—since 2001, when he took over as artistic director. Along the way, he has won the ardour of generations of women and the kind of acclaim people create Faustian bargains over, including France’s Ordre national de la Légion d’honneur.

But the most interesting thing about Elbaz isn’t his success or even his superlative Lanvin oeuvres, including this spring’s exquisite sculptural suits and dresses that fall just there and drape just so. It’s that Elbaz embodies the true spirit of fashion: He loves women, understands them, designs for them. “Style is about bringing a woman’s individuality to the surface,” he explains. “Not hiding it or playing a role but truly revealing it. That’s how I see my profession: veiling the body to unveil the person.”

Learn more about Lanvin’s Alber Elbaz on the next page…

Elbaz’s latest reveal? His move into makeup, courtesy of a collab with French beauty giant Lancôme: Elbaz created four original designs for the brand, which are emblazoned on select eye-makeup packaging.

The limited-edition products hit counters this month, but Elbaz’s association with the brand goes back to his days as an assistant designer for Geoffrey Beene. (In 1984, Elbaz moved from Israel to New York with $800, a gift from his mom.) “Every time I passed through JFK on my way home, I would buy Lancôme products for my mother,” he remembers. “ Day cream, night cream and lipstick in red and bordeaux. They weren’t just products—they were mythical objects!”

Elbaz credits those early days at Geoffrey Beene with transforming him into a real designer. “Everything I know comes from him,” he once said. In 1997, Elbaz moved to Paris to revive the Guy Laroche label; in 1999, Yves Saint Laurent and Pierre Bergé tapped him to take over design duties at YSL. Two months later, Gucci Group bought YSL and installed Tom Ford as the sole designer. Elbaz, devastated, took a sabbatical. He travelled across Asia, amassing some 2,000 sketches as he pondered his future—he even considered leaving fashion to achieve his first dream of becoming a doctor. Then Lanvin called.

Elbaz joined the legendary fashion house with a light heart and a new attitude: “I decided only to do what I love, both with and for the people I love.” That includes his clients. “At the end of a show, I’m happy and sad at the same time,” he says. “I know I’ll miss the pieces I’ve created because I don’t imagine dresses; [I imagine] women. When I take a taxi with my sketches at the end of the day, there are 250 women in the car with me.”

Those women form the core of a fashion philosophy that was sparked at age four, when Elbaz created dolls out of cotton, gum and his father’s cigarette papers. “What remains is the strength you have imparted to women,” says the designer. “Not power—you can buy that. Strength is something more intimate; you can’t fake it. When you tell someone you love them, you are giving them strength.”

Eyes on the prize: Alber Elbaz’s take on mascara
“The only things I’m truly proud of are my eyelashes, so mascara was the project for me!” says Alber Elbaz of his reimagining of Hypnôse, Lancôme’s bestselling mascara. Eyes provided Elbaz with rich subject matter. “There’s seduction, of course, but, first and foremost, eyes show intelligence,” he explains. “I love when you can see someone thinking deeply by the look in their eyes. For me, eyes are the mirror of both mind and heart. They’re the meeting point of the rational and the emotional. It’s that contradiction that makes them so fragile.”