Across the universe : Eco-friendly fashions

Eco concerns are changing fashion - but for how long? 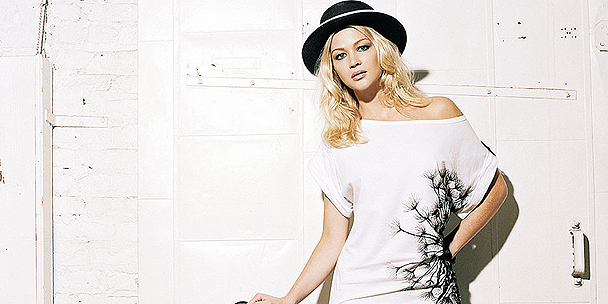 In 2008, who isn’t going green? From the strip mall to the maison de couture, the eco-fashion echo resounds: Sales of organic cotton have increased by 130 percent over the past four years, and the United Nations has declared that 2009 will be the International Year of Natural Fibres. "It’s such a buzzword," says Julia Grieve, founder of Preloved, a Toronto-based line created from vintage clothing that counts Daria Werbowy, Hilary Duff and Ellen Page among its fans. "Everyone wants to be a part of it — I think it’s amazing."

It’s also a natural progression. When
An Inconvenient Truth burst into public consciousness in 2006, it united all the global eco groups, from organic foodies to hard-core environmental activists. It brought eco to the masses — and the masses must be clothed.

Today, more and more consumers are questioning the use of environmentally hazardous chemicals in fabric manufacturing, as well as the provenance of clothing and accessories made in regions like China and India that have a poor record of workers’ rights and environmental protection.

In terms of pollution, one doesn’t usually think of the textile industry as being on a par with the chemical, mining and oil industries, but it is. Can fashion ever really go green? Is this movement a fad or a real revolution?

"It’s so not a trend," says Barbara Atkin, vice-president of fashion direction at Holt Renfrew. "This is all about social change. As a planet, we have to make a change — and fashion is part of that." Atkin says that eco fashion has been on her radar for about a decade. "We tested the waters in a very quiet way, but unfortunately the lines [we saw in the past] weren’t always fashionable," she says. "For our customers, we need to approach it from fashion first: If they love the product, they’ll be proud to wear it. If it’s just a philosophy, everyone suffers."

Grieve agrees. "I see some of these new designers who are getting caught up in it [green fashion] being their niche. I say ‘Bamboo, shamboo – if it’s ugly, people won’t buy it.’ It’s important to remember what comes first."

Holt Renfrew was the first Canadian retailer to carry Edun — a line of organic-cotton T-shirts and dresses created by Ali Hewson, Bono’s wife — but chose not to continue with it. "The brand didn’t keep up with the fashion-ability that our customers expect," says Atkin. (Eco lines that made the cut include Stella McCartney and Theory, as well as Pink Tartan and Teenflo, which have created organic-cotton T-shirt collections for Holts.)

At 889 Yonge, an upscale yoga studio and boutique not far from Holt Renfrew, a holistic lifestyle — from non-toxic paint to fragrance-free skin care — is the priority. There, the Loomstate (the organic-cotton brand dyed with vegetable matter) and Edun lines — both of which are designed by Rogan Gregory — are flourishing.

"We’re trying to do the research for our customers," says Kathryn Findlay, a fashion buyer for 889 Yonge. To determine whether a line is eco-friendly, Findlay grills her vendors. "We start with fabric content," she says. "Is it organic? Is it sustainable? We’re also concerned with carbon footprint: how far the clothes need to be shipped and how the workers are treated." Findlay points to Edun as a line that fulfills all of the above criteria. "Its mission is to have the cotton farmed, manufactured, dyed and shipped in one place," she says.

Holt Renfrew recently created an eco committee to support the green movement. Atkin, for one, is optimistic. "It’s a partnership between fashion and consciousness," she says. "As consumers are bombarded with more products than they need, they’ll start to examine the values of the corporations that they’re doing business with. We don’t need to march in the street. It will be a quiet revolution."

The skinny on the four most popular eco-friendly fabrics.