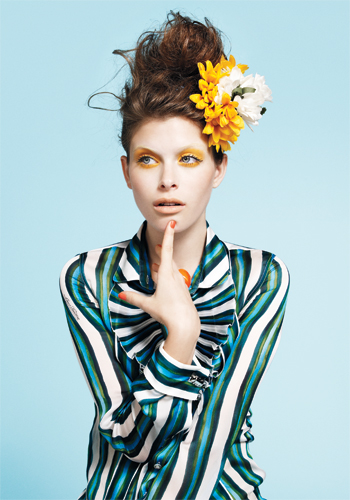 Can eco-friendly fashion be truly luxurious? That’s the question a new breed of high-end designers are attempting to address as of late, chasing any granola-and-hemp clichés away and replaced by ultra-luxe pieces fashioned from sustainable materials — and, most critically, ethical business models — that don’t compromise on desirability.

The so-called green movement in fashion is, of course, nothing new. In the early nineties Giorgio Armani, the maestro of the suit, began to experiment with hemp, weaving it into his lines; Donna Karan’s Urban Zen Initiative combines a philanthropic foundation with retail that distributes natural and organic creations; the LVMH-owned Edun, a socially and environmentally conscious label by Bono, the U2 front man, and his wife, Ali Hewson, and designed by Loomstate’s Rogan Gregory; and both Britain’s high priestess of punk Vivienne Westwood and Ilaria Fendi, of the Fendi handbag dynasty, create handbags using artisans in Africa. Arguably, no one has done more to spread the gospel of green than Stella McCartney, whose continues her mission to eschew leather or fur and whose Fall 2012 presentation featured platform soles made out of bio-degradable material and is set to launch a hot new line of sunglasses from castor oil seeds.

Upmarket sustainable designs have also hit the red carpet. Witness Michelle Williams who chose to forgo the usual couture confections at the Baftas for a custom organic cotton gown by H&M, and The Help’s Viola Davis, who stepped out in a gown by Valentino made partly from recycled plastic bottles at this year’s
Golden Globe’s. For the equally important blingy accoutrements, MObama fave Monique Pean’s sustainable gold, Ivanka Trump’s conflict-free diamonds (available at Birks) and Fonderie 47’s pricey baubles made out of recycled rifles cleared from war zones have all made decadent eco-friendly turns on the red carpet.

The phenomenon, however, has begun to hit critical mass with industry’s latest crop of sustainable designs. Unequivocally equated with chic, these brands go beyond trend and, instead, mark a systemic change to the definition of luxury fashion.

Check out some eco-friendly and organic beauty products here.

Find out which brands have made the transition to eco-friendly fashions, on the next page…

Since launching in 2010 in kaleidoscopic colors and eye-popping prints inspired in part by traditional African textiles, design duo Max Osterweis and Erin Beatty have been nominated for both the CFDA/Vogue Fashion award and, most recently, the Swarovski award for Emerging Talent. Accolades aside, their ethically minded collection, most of which is produced in Kenya, is like crack to the
street style set who can’t get enough of their quirky coats, work-appropriate wrap dresses, and flirty sequined skirts.

Consuelo Castiglioni has been on quite a creative roll as of late. There was the worldwide success of her instantly sold-out collection for H&M and now Marni’s designer is delving further into her mix master schtick with Summer Edition 2012, a capsule jewellery collection that gives new life to melted and molded vintage records. The 15-piece line, which includes dangly earrings, blooming metal bracelets and
multi-coloured chintzy floral clusters dotted on double-chain necklaces, offers enough signatures that Marni-philes have come to expect (think lacelike petals reinterpreted in perforated plastic) but newer Castiglioni converts will appreciate the fresh take on recycled materials. Expect to see plastic bottles integrated into their next bijoux Recycle collection.

When it comes to covetable arm candy crafted out of exotic skins, VBH’s well-heeled clientele are spoiled for choice – just ask Gwyneth Paltrow, Nicole Kidman, Sarah Jessica Parker and Taylor Swift who are regularly seen toting styles in lizard, python, ostrich and alligator — but chicettes of the vegan-conscious variety have been all but ignored. Until now, that is. Designer V. Bruce Hoeksema set out to create an animal-free collection featuring alterative materials that met the highest ethical standards without compromising on style. The first bag debuts this season and takes the shape of one of the accessories lines most sought-after designs, the VBH Brera, but has been handcrafted by artisans in Florence from quilted black ecopelle—a manmade alternative to leather.

Want to know what other designers are making the initiative to go green? Read on to the next page…

4. Honest by Bruno Pieters
Of all the brands with an eco bent, it’s perhaps Belgian designer Bruno Pieters that is the most out of the box. His new initiative, Honestby.com, launched only in January but is being called ‘subversive’, ‘transformational’ and ‘a game changer’ in its approach to green design and merchandising.

The site carries a collection of 56 pieces for both men and women that are made from natural and ecological fabrics sourced from around Europe, including vegan items and pieces made from recycled wool and other fabrics but beyond. Here is the revolutionary bit – it is completely transparent in its manufacturing processes as well. For example, under the section “material information” you will find the description of material used, its composition, weight, yarn or piece-dyed, the origin of the raw material, who spun it, who wove it, whether it is organic, if so, what certificate it has earned (and what said certificate means), and a website for the supplier – and you will find this for the fabric, the zipper, the lining, the trim, the label, the buttons, the thread and so on. While under “price information” you will find out the cost per meter of the fabric, how much was ordered, how much was used, how much labour was involved, what the mark-up was, and how the profit was used.

Only 20 items of each style will be made (including different sizes) by Pieters, and then start offering curated collections by guest designers in April, starting with Toronto-bred designer and Elle Canada favourite Calla Hayes. Fashion forward, indeed.

5. Manolo Blahnik X M. Patmos
Step away from the Birkenstocks, your green-shoe has gotten a major makeover in none other than Mr. Manolo Blahnik. The sole master teamed up with Marcia Patmos (formerly of Lutz & Patmos) to create his first eco-friendly footwear collection. Made entirely from discarded tilapia skins, cork and raffia, we can’t think of a chicer way to manage your carbon footprint.

A few more sustainable brands on the next page…

Using recycled and certified organic fabrics, non-harmful dye processes and ahimsa silk (which does not harm silkworms), this burgeoning New York based label designed by former Voguette Eviana Hartman specializes in slouchy sweaters and
asymmetrical day-to-night dresses with an architectural bent. The entire collection is crafted in the U.S. and Hartman ensures that workers are treated well. “We seek to create items with an optimal balance of utility, beauty, and quality,” explains Hartman. “[Our] approach to style is more about nuance, less about hype, excess and instant gratification.”

Imagine if Dries van Noten and Phoebe Philo’s Céline had a baby and you get an idea of what this New York-based label — which made its splashy spring debut in the gilded halls of Paris Fashion Week — looks like. The brainchild of Paul van Zyl, a South African human rights lawyer who worked with Nelson Mandela and Desmond Tutu, and Kristy Caylor, who was president of Band of Outsiders and previously managed Gap Red’s campaign, Maiyet’s mission is create a design-driven fashion line that works with artisans and companies in economically and politically challenged countries as disparate as Colombia and India to produce ready-to-wear, jewellery, and accessories. The work helps bring stability and financial welfare to needy communities, and a portion of the profits goes toward training artisans.

While Canadian superstrutter Daria Werbowy fronts the lookbook and online campaign, it’s the pieces that sell themselves: coats are sharply tailored, accessories sophisticated and the bags luxurious (the founders are quick to point out that though the hardware is manufactured in Africa, the bags themselves are made in Italy). The brand has been called both a
luxury label and geopolitical statement, but just two seasons in it appears they are succeeded on both fronts.

Organic beauty: What you need to know