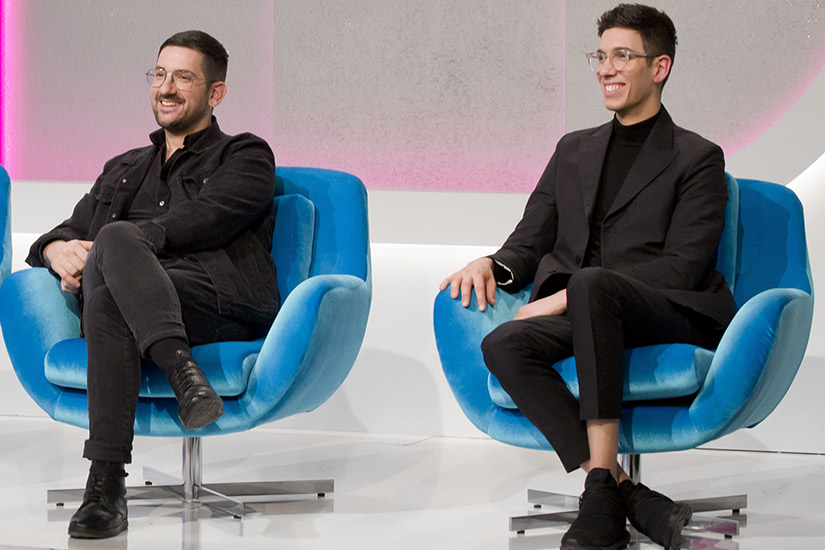 Stitched, a new fashion-design competition show, premiered last night. The premise? Four talented, ambitious fashion designers compete in a series of challenges, until one is crowned the winner by a panel of judges. The first episode saw a group of young talents tackling faux fur, bedroom curtains and superhero costumes to create modern, on-trend looks. Joining resident judges Joe Zee and ELLE Canada editor-in-chief Vanessa Craft were guest judges Simon Belanger and José Manuel Saint-Jacques of Montreal-based luxury womenswear label UNTTLD. Here’s what one half of the design duo, Simon, had to say about guest-judging, being inspired by young designers and sharing a few laughs on set.

How was your experience on the show?

“It was great actually. We did a TV show called La Collection, it’s like the Quebecois version of Project Runway and José won that show. So we were familiar with the whole process of being contestants on a fashion reality show and so it was kind of like closure for us because we were like now sitting on the other side judging the contestants.”

What was it like to be on the other side as judges?

“Sometimes in the fashion industry people are not the most honest that they could be. So José and I decided to take the mandate of being as honest as we could with information that was useful for the young designers. There’s no point in just denigrating their work—you want to give them comments that will help. I think that when you’re a young designer, you often approach design in a very dreamy way, or in a way that’s a bit out of reality. I think it’s important to listen to people that have more experience. And because it’s a TV show, you try to make your comments as entertaining as possible while being useful for the contestants.”

Stitched contestants face off in the final runway challenge

What was the most inspiring part for you?

“Being reminded of the freedom that you have when you start designing. Just letting yourself go and be as creative as you can be. So that was really inspiring. Then also have the stories of [resident judges] Vanessa and Joe, having people that are veterans of the industry and how they keep a very healthy perspective on what the fashion system is and how to filter through what is amazing and what you should just let go of. The real stories behind all the glamour.”

Were there any parts of the experience that you found difficult or challenging?

“Filtering through everything that went through your mind to narrow it down to something that’s really useful for the participant was very challenging. All the judges often had the same comments so you had to be creative. If you weren’t the first one to spell it out for them, well you have to try to figure something else to say.”

What was the funnest part about being on the show?

“The energy was fantastic. The producers of the show are really fun. They’re very invested and they encouraged us to be as genuine as they want it to be so that made a very good atmosphere during the filming and then Joe and Vanessa have a very good sense of humour so there was a few jokes that were said that we had to hold it together to keep the filming going. It was a great experience. We would do it again anytime.”

Joe Zee, Vanessa Craft and the designers of UTTLD

Watch Stitched every Sunday at 9pm on Slice.