The face of Dree Hemingway

The hottest name in the model industry. 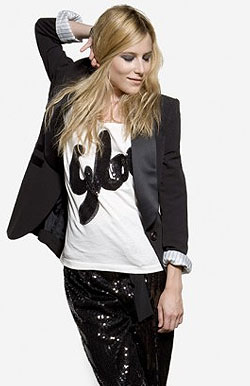 If you ever have an occasion to meet
Dree Hemingway, a word of advice: Don’t ask about her great-grandfather (yes, he’s Ernest) or her mother (yes, she’s Mariel). Hemingway has no interest in talking about her pedigree, and with good reason: Instead of banking on it, the 22-year-old model is creating her own future. With campaigns for DKNY and Abercrombie & Fitch — not to mention runway stints at Givenchy and Valentino — under her belt, Hemingway is the face to watch in fashion.

And she wears her It status well. ELLE caught up with Hemingway at
Mango’s spring/summer 2010 fashion show in Madrid. A down-to-earth person with a throaty laugh, Hemingway chatted about personal style, Katharine Hepburn and why Oscar de la Renta is the man of her dreams.

What are your fashion influences?

“People inspire me. I grew up watching a lot of old movies — anything with Katharine Hepburn. Her sense of style seemed inherent. To this day, I’m still on the hunt for those perfect wide-legged, highwaisted pants! Fashion is an emotional expression for me — it’s all about how I feel and who I am in that particular moment.”

Your first official ad campaign was with DKNY. Tell us about it.

“I remember thinking ‘Do I really belong here?’ I was such a nerd in front of the camera. I was just so happy for the experience. In the campaign shots, I’m grinning ear-to-ear! After that, I started to buy fashion magazines in droves. I didn’t care about the models in the clothes; I cared about the clothes on the models, the idea of ‘What story is being told here?’”

Who is your favourite designer?

“Oscar de la Renta. I love his work! I have this recurring dream where I’m in one of Oscar’s big ballgowns, with lots of tulle, and combat boots, running around New York City. Oh, yeah, that’s me in a nutshell!”

Find out what defines Hemingway’s personal style on the next page …
Go tribal: Enter the wild bunch…

How do you define your personal style?

“I’d like to think that I’m an eclectic mix of street and sass, but I’m no extremist. Circa-’90s grunge isn’t what I’m going for because I never want to take away from the designers’ aesthetic. But I’ll always have my combat boots….”

What is your weekend wardrobe?

“A white T-shirt, jeans and killer heels. It’s quite boring, but it’s my uniform.” What do you do for fun? “I’m not a party girl! Everybody thinks I am, but it’s not true. For me, the ideal evening is going out to a restaurant with friends.”

“New York is so fast! I always feel very calm in Paris. The first time I visited, I thought it was really strange that people spent hours and hours sitting in cafés where the waiters are just as slow as the customers. But, little by little, I started to understand that French people really know how to enjoy life.”

What is your relationship with Mango?

“I worked with them on an online campaign called whatshouldiwearby Mango.com, where I modelled some of their spring looks. I fell in love with the clothes and asked if I could keep everything after we wrapped. I have a lot of designer clothing, but I love the idea of buying something that looks expensive but isn’t. That way, I can buy a lot!”

Scarlett Johansson is the current image for Mango and has also embarked on a music career. Do you have other creative aspirations besides fashion?

“I love music. I wish I could be involved in that industry somehow. I grew up listening to anything my dad listened to, which was typically rock ’n’ roll. He had three CDs in his car: The Beatles, Jethro Tull and
Jesus Christ Superstar. Music is a great tool to get me into character on a shoot. Play Animal Collective and I’m good to go!”

Do you have any interest in writing?

“I don’t have enough experience to write anything. I scribble in my journal, but I am morbidly afraid that someone might read it. If that happens, I’ll just throw the thing away.”

If you weren’t a model, you would be…

“A ballerina, maybe. I studied for 15 years with The School of American Ballet in New York City and then worked with Suzanne Farrell [artistic director at The Suzanne Farrell Ballet at the John F. Kennedy Center for the Performing Arts]. She taught me movement and grace, and these are a great asset to my modelling career. Whether you’re onstage, on a runway or in front of a camera, you can portray the most complex emotions in one movement. Modelling, like ballet, is very therapeutic for me.”

A flouncy, floral skirt is the easiest way to punch up your wardrobe

Make the Most of Your Summer With These Style Essentials