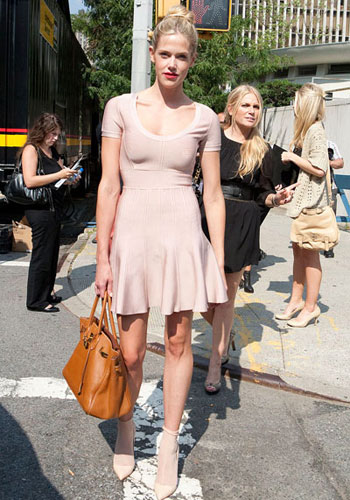 Fashion loves an It girl. Take Chanel’s Karl Lagerfeld who anoints new ones-Blake Lively, Rachel Bilson, Alice Dellal-faster than most people go through a box of Ladurée macarons. It girls tend to have a few traits in common: Leggy, lovely and connected, they score coveted fashion campaigns and guest star on
the season’s top catwalks. We’ve put together a list of our favourite new It girls, the ones guaranteed to swish past the most exclusive velvet ropes this season. The countdown to #1 starts now.

At a glance: London blueblood

At a glance: Parisian bohemian

Points for: Designing the You Can’t Judge a Book by Its Cover series of chic clutches (like The Misfits by Arthur Miller, which Michelle Williams recently wore on the red carpet), plus a seven-piece clothing collection debuting this fall.

Related species: Pierre Le-Tan (father and illustrator of covers for Vogue, The New Yorker and books by Raymond Carver).

At a glance: New York hipster

Who will make it to #1 on our It girl list? Read on for our picks…

At a glance: British socialite

Spotted: Making the rounds with her sister at London’s top clubs.

At a glance: Hollywood offspring

Points for: Directing short films for Wren, Opening Ceremony and DVF’s collab with Current/Elliott; working with established and emerging stars such as Kirsten Dunst and Aubrey Plaza.

Spotted: At the Coppola vineyard in Napa Valley.

Points for: Landing the Fall 2012 Miu Miu campaign, photographed by Mert Alas and Marcus Piggot; starring in Hit and Miss, a British miniseries as a pre-op transgender assassasin, and with Amanda Seyfried and James Franco in this year’s upcoming Lovelace, a biopic about Linda Lovelace.

Spotted: Filming in L.A. and Manchester, being fabulous around New York.

At a glance: Monaco royalty

Verdict: Charlotte Casiraghi wins the It girl crown this season, due to her natural beauty, poise and unrivalled ancestry. Long live the queen! Until next season…