Style sleuth: On the hunt to uncover Canadian style

Beyond toques and moccasins, is there a distinct Canadian style? 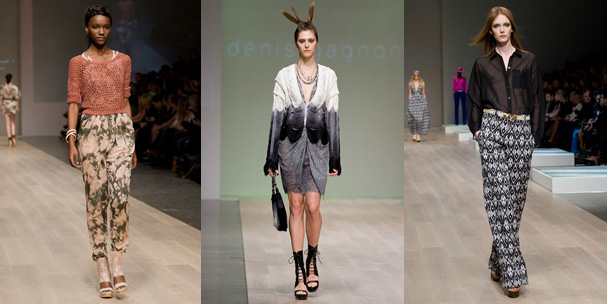 Canadian style: The subject seemed like a good idea at the time. That was last September, when the Costume Institute at the Metropolitan Museum of Art in New York announced an exhibition called American Woman: Fashioning a National Identity. Our neighbours to the south were at it again, making noise about American style and going on about the Gibson girl, movie stars and bohemian socialites like Rita Lydig.

So, what about Canadian style? It can’t be that difficult to find something to say. But the show at the Met has come and gone, and I’m still struggling with the idea. Definition as a kind of self-defence comes easy, along with that sniffy, holier-than-thou attitude that we’re so good at up here north of the 49th. Whatever it might consist of, Canadian style must surely be more modest than the American variety that always seems to be declaring its own importance.

Then, along came the Vancouver 2010 Winter Olympic Games to demonstrate that we, too, can be shamelessly chauvinistic. It began with the Own the Podium program. Patriotism was stoked again at the opening ceremonies, when the U.S. team appeared in Ralph Lauren toques that looked like knock-offs of a Canadian classic. By the time Canada took gold in men’s hockey, any thought linking Canadian style to self-effacement went flying across the ice along with Sidney Crosby’s mouthguard.

Traditionally, we take pride in not being show-offs. In 1932, Gertrude Pringle published Etiquette in Canada: The Blue Book of Canadian Social Usage. In the preface, she explained that one reason why such a book was necessary was to “combat the influence of motion pictures” and the “showy” way they represented social life.

In The Canadian Look: A Century of Sights and Styles, which came out in conjunction with the country’s 1967 centennial, author Ken Lefolii assumed a similarly superior air, writing “I believe that the presence of some Canadian women still has a note of grace that has been missing in American women for at least a generation.” Congratulating ourselves for our refined sensibility is perhaps just a way of making up for the fact that there is not all that much about what we wear that we can call our own.

Read more about Canada’s sensible style on the next page…

It was also in our centennial year that the Royal Ontario Museum (ROM) mounted an exhibition called Modesty to Mod: Dress and Underdress in Canada, 1780–1967. In the catalogue, Katharine B. Brett, curator of the costume and textile section, acknowledged indigenous inhabitants’ contributions, such as leggings and moccasins, but otherwise flatly stated that “we are part of Western civilization, and our clothing is that of the Western world. Our his­tory began too late for a regional costume to develop.”

Alexandra Palmer, senior cur­ator of costumes at the ROM, agrees. “We don’t have a national design identity or fashion,” she says. Moreover, in this globalized world, it’s not going to happen anytime soon. In her book Couture & Commerce: The Transatlantic Fashion Trade in the 1950s, Palmer makes it clear that originality wasn’t foremost in the minds of Canadian custom­ers, even during couture’s golden age. “Appropriateness” was a more significant concern, with Canadian taste leaning toward “understatement and long­term value.” As an example of the care that went into making garments last, Palmer cited Toronto socialite Dorothy Boylen’s air­conditioned, thermostatically controlled, cedarized dressing room and in­cluded a picture of Rose Torno, a Balenciaga client, arranging her closet using special hangers with 45­-centimetre handles.

As for understatement, we like to go unnoticed and likely do, especial­ly by outsiders—except for those with sharp eyes. Fashion writer Holly Brubach has some of the sharpest in the business. As a journalist, she has worked for The New Yorker and The New York Times. She also did a stint as creative director for Birks jewellers, during which she came to recognize that “Canadians do dress differently from Americans.” Case in point: the Olympic Games in Vancouver. From her hometown of Pittsburgh, she watched them on television and found herself fas­cinated by the Canadian ice­dancing team of Virtue and Moir, admiring their costumes for being so “elegant and simple.”

Tasteful: That’s not a bad rap to be stuck with, but it can leave you longing for a little recklessness. On the international scene, Dan and Dean Caten, the Canadian twins be­hind the DSquared2 label, have staged shows and styled campaigns as raunchy as you’d like. And they have made irreverent use of Canadian iconography: Their run­ways have featured Mounties, the music of Anne Murray and, more recently, hockey, which was the theme of their men’s collection for fall/winter.

Still, in Vancouver, when Montreal-­born Nikki Yanofsky sang the national anthem at the opening ceremonies of the Olympic Games, there was nothing about her dress—which was designed by the Catens—that revealed its humble Canadiana origins. Sure, it was red, but it was a stunning little cock­tail number without borders. “Canadian style? That’s a tricky one,” answers Dan Caten, not taking the question too seriously. “There’s a kind of ‘laid­-backness’ to it.”

Todd Lynn, a Canadian­ born designer who has been earning It status—along with Erdem Moralioglu and Mark Fast—in London, isn’t bothered that Canadian style eludes def­ inition. He actually sees it as an advantage. “People don’t judge you in the same way they would if you came from another place,” he says. “Everyone has their own prejudices, but they don’t have any preconceived ideas about Canada.”

­ Ultimately, the question for Canadians might be not “Do we have a style?” but “Do we really want a style?” I’ve been haunted by the chest­thumping that went on in Vancouver, but I have an even more vivid re­collection of an interview with Diana Vreeland that Montreal jour­nalist John Fitzgerald did for The Gazette back in 1978. Formerly of Harper’s Bazaar and Vogue, Vreeland was a consultant at the Costume Institute at the time and had organized the 1975 American Women of Style exhibit. On Canada and style, she said: “I’ve never thought of Canada as fashionable, nor would I ever go up there to look for it and I am not remotely interested in the idea. People can stand for other things. You people got where you were and it wasn’t because you dressed fashionably; you did it because of the brains and culture of your people.”

Brains and culture: That’s not a bad rap either.