Taylor Tomasi Hill was my first style crush, and she’s back.

You always remember your first. 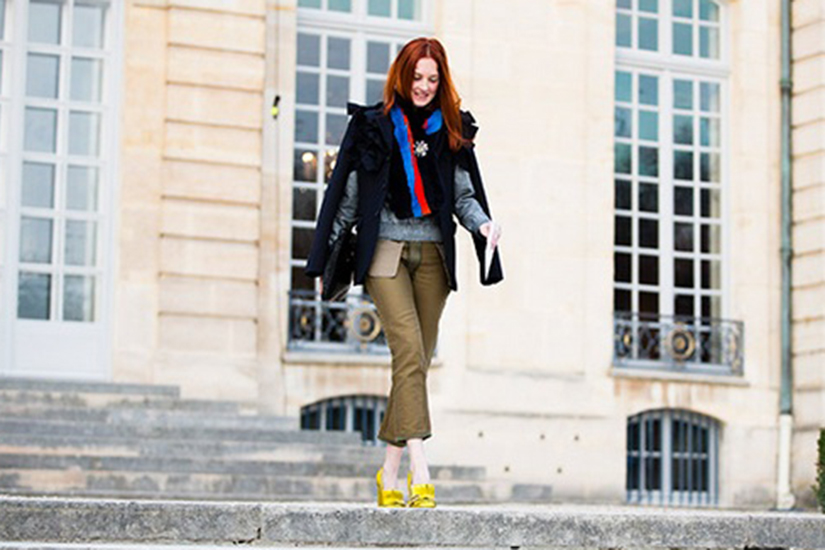 I first saw a photo of Taylor Tomasi Hill sometime in 2012. She wore a bright yellow mini skirt paired with opaque grey tights and a crewneck sweater. The outfit looked edgy, distinctive and bright against the dust of the Tuileries Gardens in winter – the setting that would serve as the ring of the growing street style circus in the coming years. After seeing that photo I latched on to her style, frequently typing her name into the Google search bar and hitting “images.” The search results would bring up photos of the editor-turned-fashion-director rocking sneakers long before they became ubiquitous. Tomasi Hill’s layering was insouciant, her accessories always on-point. As one of the OG street style stars, TTH (as she is known in the comments sections to fellow internet admirers) rose to prominence in what I consider street style’s Golden Age, a time when editors wore past-season pieces and bloggers weren’t clad in head-to-toe looks that walked the runway a mere two days prior.

After one of my Google binges, I would turn to my own clothes and play. As an unpaid intern with an under-the-table side hustle at a vintage clothing shop, my closet didn’t have nearly as much Rick Owens and Balenciaga as hers (or any, really). The fantasy of TTH’s wardrobe helped fuel my own dream of one day becoming a fashion editor, or at least a fashion-something. This style crush was so all-consuming that it even drove me to buy a box of red hair dye for a brief stint with similarly flame-coloured locks.

READ MORE: This trend appeared 39 times on the fall runways

Then, sometime after the publication of the umpteenth op-ed about street style’s peacocking problem, Taylor Tomasi Hill quietly retreated. She repeated simpler, less baiting outfits and breezed into shows without posing for the photographers. She started a floral arrangement company called TTH Blooms. She stopped popping up in street style galleries. With so many other stylish personalities ready to provide Instagram fodder, the circus moved on. But I missed her witty looks, the bustiers worn over band tees and towering boots paired with cargo pants. I still paid attention to what others were wearing, with the Russian pack having a particular draw, but no other name was worthy of the Google image search.

READ MORE: The skirt from your middle school days is back in a big way

As I was selecting images for our own street style roundups this season, Taylor Tomasi Hill, who is now the vice president, creative and fashion director of retailer Forty Five Ten, appeared in New York wearing uber-layers and expertly clashing accessories, and again in Paris in a striking combo of leather trousers and a stiff, corseted jacket. Her outfits registered as cool and authentic as ever – she even wore that pair of leather pants more than once. If Taylor Tomasi Hill’s street style “comeback” is proof of anything, it’s that fashion is unfailingly cyclical. Here’s to crushing on.

Cooler months call for serious layering skill testing, but with these tips from our styling team, you'll be taking your layering game up a notch.

Sometimes, it's by getting back to basics that we elevate our style game. Oozing elegance and insouciance, the humble wardrobe essential that always has your back (pun intended) is the plain white shirt.

Since the 1950s, the famous footwear has never gone out of style, but that doesn't mean it isn't undergoing a renaissance. From grunge to dressed up, here are some of our favourite looks highlighting the star boots.