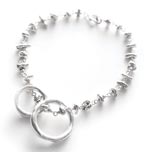 It’s a long climb from midland Manitoba to the gilded heights of Hollywood, but Winnipeg jewellery designer Hilary Druxman has made a name for herself in the fickle world of celebrity fashion.

Druxman, who has a bachelor of arts in economics, recalls making her first saleable jewellery in the early ’90s in her basement, warmed by a space heater and a pair of Sorel boots. She learned her craft — and discovered her penchant for classical keepsakes — at Dunn Jewellers, a small, family-run operation. She later earned a gemology certificate from the Gemological Institute of America. The mother of two currently oversees a staff of 25 at her factory in Winnipeg, while stocking retail shelves across Canada, the United States and the United Kingdom. Druxman still does a double take when she sees her creations on TV (most recently on one of the Desperate Housewives stars). “I’m kind of clueless half the time,” she says. “so it’s always an amazing bonus to get the extra attention.”