Alyx's Matthew Williams is leading a fashion house of the future. 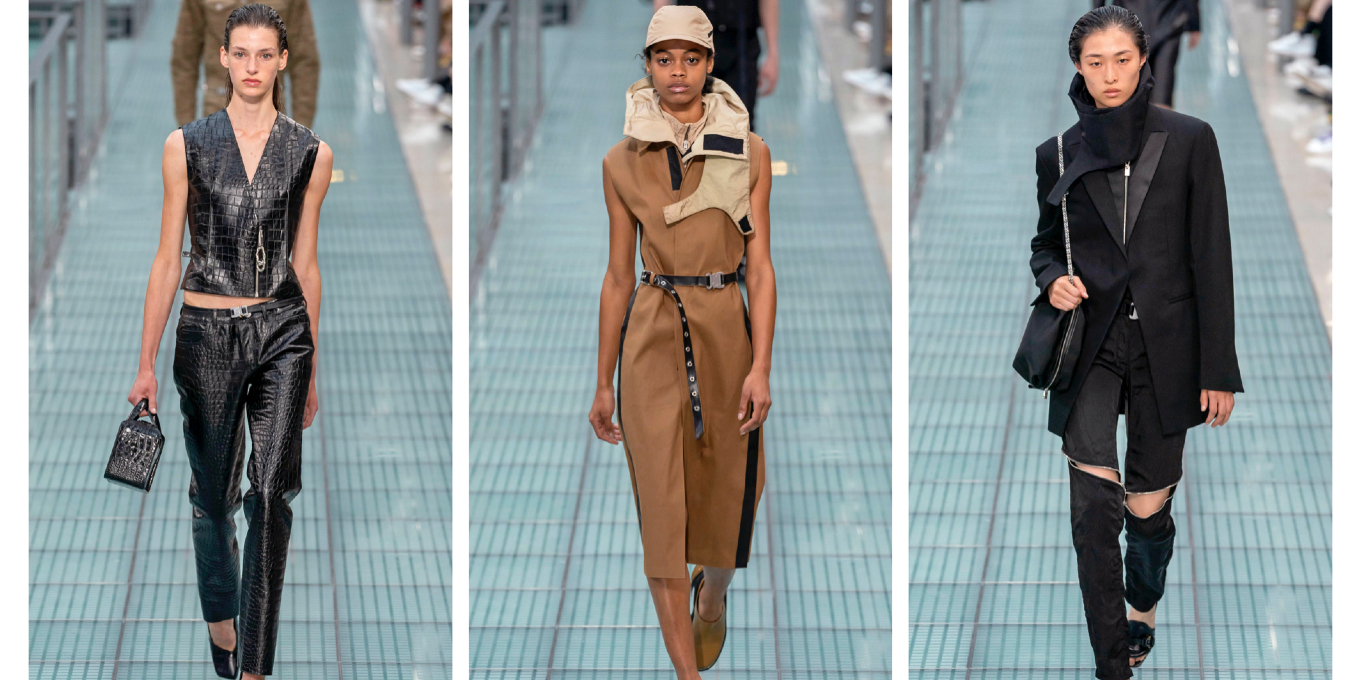 Matthew Williams doesn’t believe in keeping secrets. In front of a sold-out crowd gathered in Toronto at Hxouse, the not-for-profit next-gen-talent incubator, the founder of 1017 Alyx 9SM is sharing his company manifesto – every single word of it. Williams is on a panel with U.K. design studio OK-RM to talk about the Alyx concept and is espousing transparency. He describes its branding rationale (or “how to turn the attitude into form”), artistic strategy, business values and even the specific reasons why a particular font was considered for a garment label: “We talk a lot about tension and balance,” he explains as the afternoon sun streams through the floor-to-ceiling windows, “and balance is the answer to most things.”

The tension/balance play is part of what has made Alyx one of the most exciting—and buzzed-about—labels to wear, beloved by the street and celebrities alike. Utilitarian touches, like safety buckles resembling those on an amusement-park ride or nylon chest rigs for a hands-free urban stroll, slam up against sophisticated, highly technical design processes and craftsmanship.

Williams is a gifted innovator who himself is both raw and refined, a tattooed skater boy raised in California who wears tailored jackets with chunky Vibram-soled work shoes and exudes a thoughtful, charismatic nature. The 34-year-old has successfully stepped out of the (albeit sparkling) shadow of his past role as creative director for Lady Gaga, where he initially carved out his place in fashion history. Working with a team, he shaped her costumes from scratch (in 2008, there were very few, if any, musicians being offered clothing from design houses; costumes had to be made and sourced without the support that’s so prevalent today) and then worked on the art-direction side with Kanye West, later forming the Been Trill collective with Virgil Abloh and Heron Preston—a trifecta of emerging streetwear stars. Now a star in his own right, Williams’ collaborations with Moncler and Nike are impossible to cop, sold out before you can even think about clicking “add to cart,” and his signature Alyx buckle used for a collection of Dior bags caused mass hysteria among the hype- beasts. Alyx’s first runway show, at Paris Men’s Fashion Week in 2018, was one of the hottest tickets on the calendar, with ASAP Rocky, Abloh and West lining the front row. Now, heading into his fourth show in Paris, it’s still a bit surreal. “When I started, being from California, to think I would show in Paris one day—that was never even in my mind that it could lead there,” he says after the day’s panels have wrapped. “Even now, after the shows in the past year and a half, I’m still in a dream state, perhaps because it feels so far from the destiny that [I thought] was in front of me.”

“These rules and ways of doing business that we bind ourselves by need to change.”

Did he ever have doubts? “I didn’t know if it was going to be able to happen,” he admits. “I was successful in music and trying to transition to being a designer. It was definitely a blessing [to work in that industry], but [fashion] wasn’t very accepting. People—especially the press—like to label things. So ‘This guy’s an art director’ or ‘He works in music’ or, for the first three years of the brand, the headline of every article about me or Alyx had ‘Kanye’ or ‘Lady Gaga’ because it was clickbait. I questioned, ‘Am I ever going to be taken seriously for just who I am as a person?’” Ultimately, Williams was driven by the need to create for himself. After years of amplifying other people’s visions, he decided that he “needed to just do something [that was] completely personal.” And so, in 2015, Alyx, named after Williams’ oldest daughter and created in partnership with his formidable wife, Jennifer, was born. The family moved to Italy (first Ferrara, then Milan) to be closer to business partners and the factories and workers that create the collections. (Williams believes that the ability to work with local production clusters is key to being able to develop a truly sustainable company.)

Alyx is the embodiment of a modern fashion brand: subversive with a soul. Williams’ decision to spend a weekend doing student workshops and panels with his entire creative and production team at Hxouse was based on his driving motivation to share information and give opportunities to the brand builders of the future. He has little interest in cursory mission statements built on corporate platitudes or faux motivational upsell and passionately wants to drive change. (He also insists that anyone who works with Alyx agrees to operate under the brand’s code of ethics.) 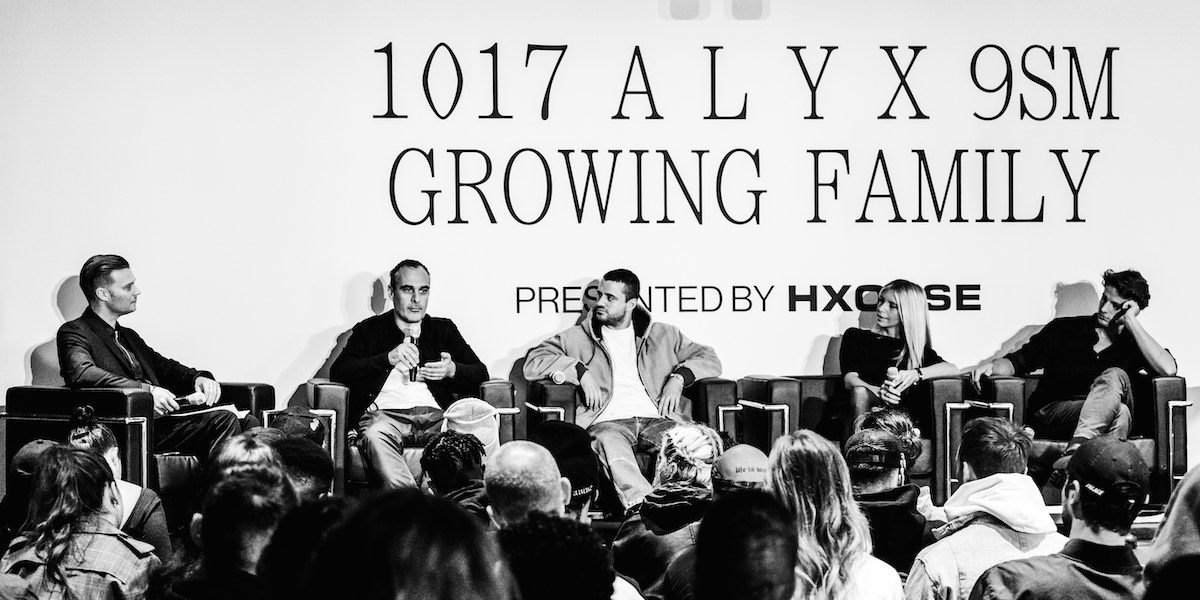 Williams on a sustainability panel at Hxouse. Photo by Kayse Egal

During a sustainability panel earlier that morning, Williams frequently—and thoughtfully—interjected to give the audience context. When Panos Mytaros from Ecco Leather mentioned the high level of energy consumption required to dye synthetic fabric (five trillion litres of water are used around the world each year just to dye fabric), and said a move to buying local only works if the industry sorts out the how portion of the process, Williams turned to the room and explained: “There’s so much technical stuff [to be aware of]. This is why bad things happen—designers aren’t aware of this in the beginning of the design process, and we go at this [fast] pace our industry is at and with the easiest option to get things done. With Alyx, I wanted to go deep and have relationships with the suppliers so I could start from the beginning of the design process with the right information. It’s so easy to compromise and use the thing that’s in stock.” And then he added, to push his point: “By the way, there is no stock-sustainable-fabric company. I have to make [fabric] from scratch, which is only possible because I’m the owner. If I’m a designer working for a big company [with factory minimums or overproduction mandates], then it just doesn’t happen. These rules and ways of doing business that we bind ourselves by need to change.”

“I just felt that if I didn’t do this, then it wasn’t worth doing my job anymore.”

Williams is doing what he can to lead that change. Alyx uses materials such as recycled nylon and cotton; leather pieces are created with DriTan, a technology that uses next to no water during the dyeing process. Most impressive is the brand’s recent pilot project using IOTA Foundation’s blockchain, a digital ledger that cannot be copied or edited. His spring/summer 2019 collection featured 15 items with scannable QR codes that track everyone involved in the production process and show the entire supply history, from raw materials to finished product. The goal is for everything it makes to eventually have this transparency.

When I ask Williams what excites him about designing with sustainability as a top priority, he says: “That making fashion could have some greater social purpose to the world and our lives. There was a point where it was like, ‘Okay, there is so much that’s amazing about the beauty and the energy of fashion,’ but when you start to hear about climate change and flooding and crops not being able to grow, you think: ‘Should I be doing something else? Is there something more impactful to my existence?’ I just felt that if I didn’t do this, then it wasn’t worth doing my job anymore. If not me, then who?”

Women Are Leading The Fight Against Climate Change