Rodarte’s Kate and Laura Mulleavy on love, fashion and storytelling. 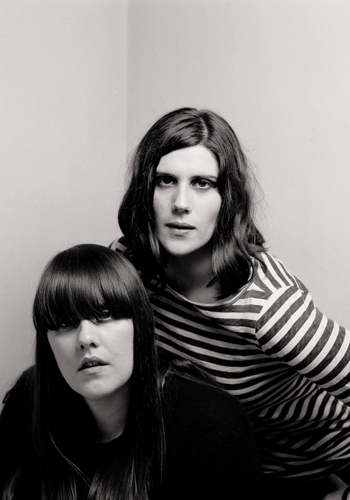 Their clothes may be the stuff of dreamscapes— dresses printed with swirling grey skies and grass seed creeping up the hem; this fall’s chiffon numbers emblazoned with cave-painting handprints—but Rodarte designers Kate and Laura Mulleavy save all the racing hearts and buckling knees for their collections. Famously down-to-earth, the sisters live near their parents in Pasadena; they wear flats; they eat. At a party held in their honour at the Bay in Toronto, they appear to be private people giving themselves—graciously, temporarily— to the room. Their creative fires burn all right, but in their eyes and their conversation.

Our Toronto meeting takes place less than a week after the Mulleavys’ all-star opera design debut: They created the costumes for Don Giovanni at the Walt Disney Concert Hall in Los Angeles, while Frank Gehry—who designed the concert hall—created the sets. (“Powerfully theatrical,” the Los Angeles Times called the show’s beaded gowns and denim straitjackets.) “I have a little postpartum depression because I felt so connected to it,” confides Laura, eyes brightening at the memory. “It’s all we did. And the end product was extremely beautiful. Opera is about visuals and sound, all things I think we connect to.”

One of the Mulleavys’ most magical talents is gathering the artistic skeins that inspire them and moulding them into art across all media. Since launching their line in 2005, they’ve worked in film, designing the haute gothic confections worn by Natalie Portman in Black Swan as well as collaborating with filmmaker Todd Cole and actress Elle Fanning; they’ve created collections inspired by Vincent Van Gogh and Asian horror films; and they’ve shown their clothes in installations at the Los Angeles County Museum of Art and the Museum of Modern Art in New York.

“For us, the creative process is very much rooted in ideas, and anything that’s idea based can transition into different media,” explains Kate, who likens fashion design to filmmaking. “When you’re working on a film, the script has its own boundaries that are laid out for you. With fashion, the story of the collection helps you in the editing process.” Laura agrees. “I find those constraints healthy,” she says and then adds with a laugh, “If we didn’t have boundaries, we would do a collection based on Australia and have hot pink all over it.”

Read on for more from the Mulleavy sisters on the inspiration behind Rodarte, on the next page…

For Fall/Winter 2012/2013, they built their collection around the aforementioned Australia, examining “thousands” of landscape pictures from the ’30s and ’70s, which, on the runway, transformed into floor-length tiered
dresses decorated with prints and Plexiglas heels filled with sand. The continent’s “crazy dynamic landscape” captivated the designers’ imaginations, even though they’ve never been there. “The connection is California,” explains Laura. “The landscape in Australia is so varied, and in California you go from lush forests to arid Death Valley—these amazing deserts.”

California often leaves an indelible mark on its artists, from the Beach Boys to Joan Didion, and the Mulleavys wear its influence like a tattoo. The first fashion pieces they ever made—seven dresses crafted at their parents’ kitchen table—mimicked the bark of California redwoods.

In Toronto, watching Laura and Kate together, as they interrupt each other and occasionally finish each other’s sentences, I can see how much they draw upon their own personal history. Though Laura jokes about the label’s division of labour (“Kate does the final sketch; I drive”), their dreams, like their vision, are shared. “Whether I’m going to all these different places in the world in my mind or I’m doing something that’s really about my backyard, I’m accessing something that’s very personal in order to understand it,” says Kate, glancing at her sister. “It becomes a narrative that’s linked to my experience of things, and I think that’s similar for Laura. It’s where your imagination takes you, and there are no boundaries with that.”