Good sport: Fashion competes in the world of athletics

Fashion designers are mixing high design with casual sportswear -- the next frontier of style. 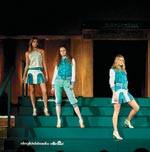 In the spring of 1997, nearly the entire front row at the fashion shows was shod in Nike silver mesh Air Max trainers. The mood that season was buoyant. Editors and buyers smiled, their feet released from a regime of high heels and slippery soles. The Air Max fad lasted just one season, but it knocked down the fence between jocks and style hounds. What had been good enough for the locker room was now good enough for the runway — restyled a little, of course. Triple-jump into the 21st century, and everyone’s doing sports: Comme des Garçons for the British tennis brand Fred Perry, Yohji Yamamoto and Stella McCartney for Adidas, Dirk Bikkembergs and Kim Jones for Umbro, Eley Kishimoto for Ellesse, Comme des Garçons and Kenzo for Repetto and Christophe Lemaire for Lacoste.

The coolest thing in your closet this summer won’t be the Marni tiki dress or Bottega Veneta cut-out pumps; it’ll be Stella McCartney’s lemon-coloured racer-back singlet with cut-out vents at the shoulder blades for Adidas or Comme des Garçons’ gold ballet shoes for Repetto, one of the oldest ballet-shoe manufacturers in France.

Sports gear is big again, but this time it’s for real. Instead of fashion designers ripping off functional sports design like Prada and Helmut Lang did in the dot.com days of utility, high-tech clothing and clean, ergonomic lines, or the way basketball and baseball jerseys pop up every once in a while, they’re finally going to the source. Designers are playing ball with sporting brands that have long histories. Umbro, which collaborates with British menswear designer Kim Jones and German designer Dirk Bikkembergs, is a hallowed British rugby and soccer brand that suited up the Brazilian team for four h of their five World Cup wins. Its fame goes back to 1934, when Manchester City won the FA Cup final wearing Umbro gear. One reason why Umbro sought out Kim Jones in 2001 was that it “wanted to grab hold of fashion credentials,” says Simon Jobson, the company’s category head for trend. “Lots of sporting brands have reached saturation in terms of producing performance products, and fashion was a way to open up new avenues.”With Jones and Bikkembergs designing special lines for Umbro, its double-diamond logo is turning up on the likes of Kate Moss, Sadie Frost’s squeeze, Jackson Scott, and New York photographer Ryan McGuiness, people who have probably never kicked a ball in their lives. Umbro is even flirting with Comme des Garçons-like “guerrilla tactics,”opening a five-day Umbro store in London’s hip Shoreditch area last October. “We challenge people’s conception of what the brand is all about, that we are not a down-and-dirty soccer brand,”says Jobson.

While Umbro has leaped off the soccer field, the iconic Italian tennis and skiwear brand Ellesse is exploring off-court and après-ski possibilities. Ellesse connected with the London husband-and-wife duo Eley Kishimoto. Their cute red-and-white striped jersey shorts, printed cotton piqué tennis dresses and cap-sleeve tennis shirts won’t make it to Wimbledon — not even on Venus or Serena — because they are not part of Ellesse’s performance line, though the collection taps into sunny ’70s Chrissie Evert nostalgia. Print-strong and retro-tinged, Eley Kishimoto is a perfect match for a heritage brand like Ellesse. Eyan Allen, the company’s creative director, says that in joining forces with Eley Kishimoto, Ellesse is catering to a new, growing niche he calls the “urban fashion market.””These people have a lot of money to spend on product, but they don’t just want to wear a label. They want a label with soul,” says Allen.

Photography of Eley Kishimoto’s collection courtesy of EllesseEllesse, Umbro, Reebok, Adidas, Nike, Puma — these are logos that we grew up with. They were the running shoes we tied on every morning before school, the track suits we wore in gym class. The nostalgia factor is a powerful and seductive market force. Combined with good styling and design, it can set a brand on fire. This is what happened to Puma. When Puma CEO Jochen Zeitz took over in 1993, the brand barely had a heartbeat. According to Businessweek, it was $100 million in debt. But Zeitz spotted the fashion-sport synergy. In 1998, he teamed up with Jil Sander, who produced a tweaked version of the classic Puma King soccer shoe. h Then Puma backed Christy Turlington’s yoga line, Nuala. Now, British fashion designer Neil Barrett, whose own clothing line dresses Orlando Bloom and Brad Pitt, heads Puma’s creative division.

The French ballet-shoe maker Repetto is also attempting a grand jeté into fashion. Repetto slippers now appear almost as often in fashion editorials as they do in the pages of Pointe magazine. The Japanese were the first to put Repetto on their fashion radar; Issey Miyake approached Repetto’s then new CEO, Jean-Marc Gaucher, in 1999. Working together, they created a boxing-style shoe inspired by Muhammad Ali. Since then, Repetto has collaborated with Yohji Yamamoto, E2, Comme des Garçons and, most recently, Kenzo. Like that of other long-standing sports brands, Repetto’s appeal lies in its old-school authenticity. “We make our ballet shoes like the old glove makers used to make their gloves,”says Gaucher. “We use lambskin and goatskin and sew our shoes inside out so they are comfortable.”

Old sporting houses bring the patina of tradition to the sports-fashion equation. They also bring technology — gear designed to make high-calibre athletes faster and more comfortable. For Adidas, Stella McCartney designed a performance, rather than just a look-good, line of running, swimming and workout clothes. She integrated features that Adidas-garbed athletes showcased at the Athens 2004 Olympics, like X-Static and ClimaLite, specialized fabrics that prevent overheating. But she packaged them in pure fashion: slouchy hipster track pants, graphic seams, multiple straps, frayed edging and great colours like dusty rose and lemon yellow.

The women’s workout market is sport’s new El Dorado. “It’s a virgin area,” says fashion designer Mark Eley, of Eley Kishimoto. “And people’s eyes are honed into that niche.”Besides the financial sense of putting sports and fashion together to cater to women, collaboration is simply a fresh approach to the creative process. It’s not new: there have been plenty of hybrid projects between fashion and the arts — like Elsa Schiaparelli’s association with Dali, for starters — but cross-creating seems to be taking off again. Think of the convergence between industrial design, sports and fashion, like Marc Newson’s Zvezdochka shoe for Nike or last year’s Philippe Starck shoe for Puma, which looks like a high-tech gardening boot. “It’s all about mixing it up,”says Olivier Chatenet, part of the vintage couture duo E2, who recently designed 50 pairs of shoes for Repetto. “It’s the meeting of style and specialized knowledge. This is an era defined by the mix rather than pure creation. It’s the most interesting thing there is in fashion right now.”Eley agrees: “Collaborating is like alternative marketing, creating new identities within market areas. It’s stimulating and motivating.”In other words, two heads — or three or four — are better than one, and if one designs for track and field and the other for the runway, all the better. That’s what makes sports and style perfect teammates. No sweat.