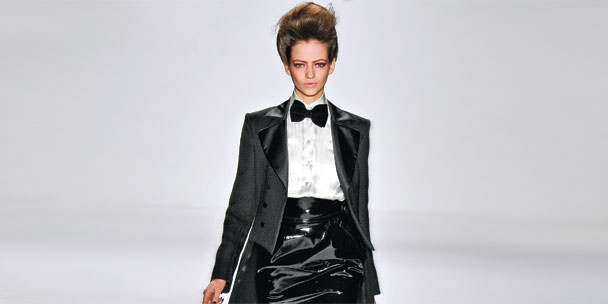 They can be butterfly, batwing, hourglass or diamond-point. Pre-tied, hand-tied or clip-on. In silk, grosgrain, madras or seersucker. If you haven’t guessed by now, the object I’ve been describing is the bow tie, the newest his-and-hers accessory. Trendsetting French nobles first spotted the cravat on Croatian horsemen during the Thirty Years War. Louis XIV adopted a silk version of this rough-and-tumble neckpiece and wore it instead of a lace jabot. Despite its swashbuckling origins, the bow tie became almost entirely usurped by tuxedo wearers in the late 19th century. As a result, the bow tie has developed a mixed appeal: At evening “black tie” occasions, the bow tie is suave and sophisticated, but daytime bow ties are not. They hint at tantalizing eccentricities in their wearers.
Colourful and patterned, the everyday bow tie conveys the gee-shucks quality of country vets and mad professors.

Now that geeks have become gods, geek accessories like daytime bow ties are getting a second look—from the girls. It girls Julia Frakes and Becka Diamond have been snapped wearing the kind of colourful clip-ons that Jerry Lewis would wear. Brooks Brothers upped the bow tie’s geek/snob ante further by collaborating with blogger K. Cooper Ray of Social Primer. Together, they came up with the Reversible Bow Tie. This trailblazing accessory combines
vintage fabrics in contrasting colours and patterns on the same bow tie. The right side of the bow may be a
nautical stripe, while the left is decorated with polka dots.

The Reversible Bow Tie inspired me to make some for my husband’s recent birthday party, which was supposed to be black-tie. I enlisted the help of my friend Simone and went off to buy the fabric—that was the easy part.

Finding the perfect bow tie on the next page …

Much harder was finding a bow tie to use as a model for our reversibles. Simone’s husband, Kasper, has one, but he was wearing it in a music video that was being shot in Denmark. After I found one in a vintage shop, the next step was figuring out how to combine the fabrics so that one side of the bow tie would come out in a different fabric from the other. Simone and I watched bow-tie tutorials on YouTube, but there always came a moment when the demonstrator’s fingers would disappear behind the knot and nothing he did or said could make us understand exactly what he was looping or folding or tying under there.

We went ahead and made them anyway, cutting them out, sewing them up and turning each one outside in with a chopstick and tweezers. Every man who was invited to the party got one, but by the 15th tie, I was too fed up to make any for the women, no matter how avant-trend I think my girlfriends are. The bow ties came out handsomely—even though both sides of the bow turned out to be in the same fabric—and our friend Craig had to tie them all because nobody else knew how. Which is exactly the kind of barrier that makes the bow tie so fashionably snobby and exclusive: It’s not just anybody who knows how to tie one on.

Classic stripes for under $100

How to wear colour this spring