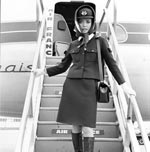 “I was glad to be entrusted with a ‘serious’ project,” Lacroix said in 2002, when he was chosen to design the new Air France uniform. “Especially as I’m often pigeonholed in the wild Baroque slot. I think that this uniform clearly proves that couture is not an abstraction — that when you’re dressing women from Paris, New York and Tokyo, you are really aware of the realities, you are really faced with something tangible.”

The Paris-based designer joins fashion luminaries such as Christian Dior, Jean Patou, Cristobal Balenciaga and Hermès, who designed for Air France between the ’60s and ’80s. “In a way, Air France and haute couture inhabit the same universe,” said Air France president Jean-Cyril Spinetta. “A world where tradition and technology intermingle, and where the aim is to diffuse and perpetuate a certain French style of living.” It’s not coincidental, however, that Air France initiated the wardrobe make-over following its merger with Dutch airline KLM. “As a powerful badge of identity, the uniform is the perfect vehicle for projecting the Air France image,” said Spinetta.

“I had to find a reassuring and handsome look,” said Lacroix, who arrived for the Air France fashion show held at the Palais de Tokyo museum in Paris wearing his own personal uniform of a cherry-red velvet jacket, black jeans and white sneakers. “The look had to translate comfort, French culture and safety.” For inspiration, he drew on his fascination with stewardess style from when he took his first flight from Paris to Corsica as a young boy.

Photo courtesy of Air FranceHe still remembers thinking the stewardesses were “beautiful, like so many war heroines. They were a bit like nurses, but I had a very aristocratic image of them.”During the three-year design process, Lacroix collaborated with Air France staff who tested the prototypes for a month.

Unlike Air Canada staff, who were so unhappy with their uniforms that their union filed a grievance, Air France employees have nothing but praise for Lacroix’s designs. “Like a dancer, I need to have freedom of movement to do my job,” said pilot Nathalie Wilfred at the Paris launch. “I have a lot of switches above my head and around me. Although they’re fitted, the wide shoulders of the jacket allow me to move around comfortably.”

The airline’s first new collection in 18 years includes fitted jackets for women with pagoda-style epaulettes, wrap skirts, slim trousers, parkas and shirts with puffs of sky-blue organza at the neck. The dark blue projects authority, and the pale-blue shirts and dresses were chosen to flatter every complexion. The red belt — a distinctive accent — is knotted around the waist “like gift-wrapping ribbon,” said Lacroix, who designed each element in the collection — even the pyjamas in first class. “The idea of seeing everybody clad the same is not really my cup of tea. I much prefer uniforms that let the personality, individuality or character appear.” Which is why 36,000 Air France employees — from ticket agents to pilots — are able to mix and match from 100 different items.

These days, it’s not only socialites and fashion devotees who wear Lacroix in first class.