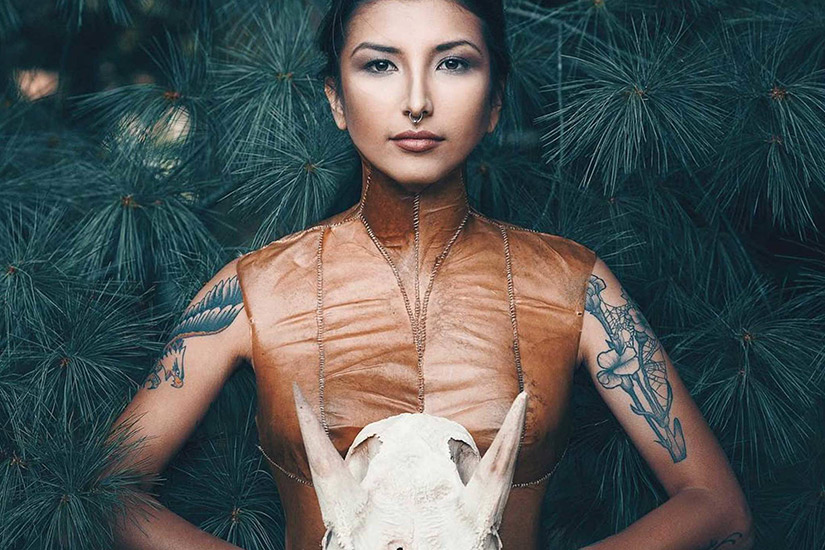 The works of Indigenous designers and artists from across Canada will be in the spotlight at the inaugural Indigenous Fashion Week Toronto, a four-day celebration of culture and craftsmanship. The event will include runway shows, artist talks, workshops and a marketplace where attendees can pick up works by Indigenous designers. The aim is to not only showcase incredible fashion, but also to create connections for designers who haven’t always been included in the mainstream industry.

We spoke to founder and artistic director Sage Paul, who is Dene and a member of the English River First Nation, about the importance of carving out a space for Indigenous fashion.

How did you get into fashion?

“I grew up in Scarborough, in a community where we were surrounded by artists and a lot of the moms took a lot of time to make sure that we were practicing our culture. My mom would always make my clothing so it was just instilled in me at a very young age. I think that’s the story for many people. But I ended up going to fashion school because I just really loved it. It felt like the best medium to express myself.”

“For me, it’s just really an exploration of self-identity, exploration of connectedness to the land and connectedness to my culture. On a larger level, I think what really drives me is that I want to see Indigenous designers have our own platform where we represent ourselves. Many people in the Indigenous community are creators, whether they’re working in fashion or crafts or textile arts. I’m really driven to create that space of high artistic integrity and a space of cultural expression. One that is really welcomed by the fashion community as opposed to just being a token.”

How did Indigenous Fashion Week Toronto get started?

“Indigenous Fashion Week Toronto came about because we need it. It’s time. It’s a multi-faceted platform that supports Indigenous artists in a way that we want to be supported. It really was an evolution of me working alongside many different artists and just trying to create a space that’s going to help support, benefit and foster Indigenous designers.”

The runway showcases are grouped into four different “seasons” — New Moon, Berry Moon, Harvest Moon and Frost Moon — can you tell us about the meaning behind those?

“We programmed each of those shows in a way that challenges the idea of seasons. The fashion industry has seasons to sell into — spring, summer, fall, winter — and then every other season in-between that’s been made up. It’s about introducing a new idea of what a season is within the context of the fashion industry. New Moon is spring time and that’s emergence, birth and newness. We programmed that as a spotlight for emerging artists and designers. Berry Moon was about regalia, the future of regalia and honouring the present. Harvest Moon is the fall time and that is a time of gathering, of preparing for the winter. During that time, a lot of teachings are passed on from elders and knowledge keepers so that we continue to know how to harvest — how to survive essentially. We took that idea as one to be able to honour our matriarchs and those women who have really paved the path for us in the industry. Indigenous people have been part of the fashion industry for a long time but not in a very prominent way. It hasn’t been easy and it’s taken a lot of work. It’s important to recognize that we have Indigenous Fashion Week Toronto because of all the work that’s been put in to ensure that inclusivity. Frost Moon is winter time and we have a delegation who’s coming out from Greenland and they’re Inuit. We also have a delegation coming from Nunavut and a group of artists coming from the Northwest Territories.”

What do you hope people will take away?

“I hope people will buy native. That’s what it’s about — getting people out and celebrating our designers, celebrating Indigenous culture and maybe walking away with having learned something new outside of what they traditionally think fashion is. I just want to present a new way of looking at fashion and one where people walk away knowing who made their own clothing.”

Tickets to the runway showcases and registration for workshops are available on the website. Admission to the panels, lectures, market place and art exhibit are free.