The top 5 designers to know from Ukrainian Fashion Week 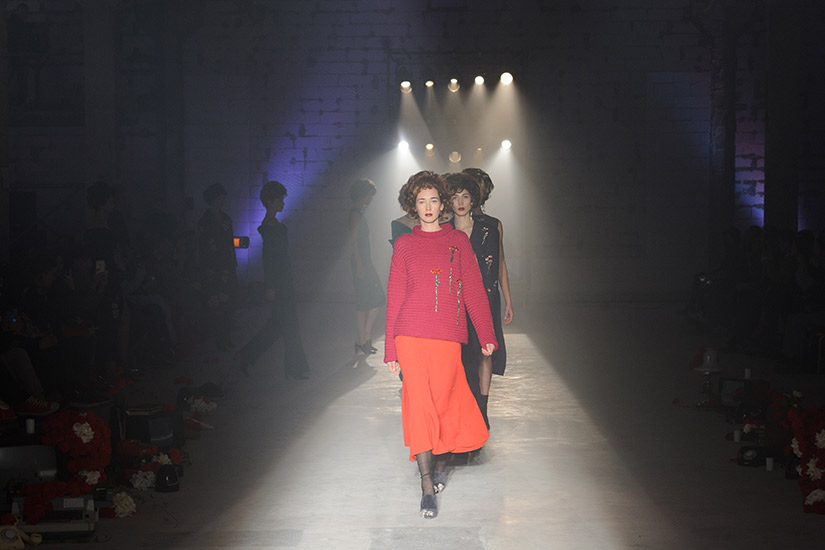 This summer, ELLE Canada’s associate fashion editor Liz Guber travelled to her hometown of Kyiv, Ukraine. She was so stoked on the local fashion scene that she wrote an entire story about it. Liz also met up with sister publication ELLE Ukraine. Below, the magazine’s chief web editor Olga Diachuk offers her review of Ukrainian Fashion Week and the 5 designers to keep on your radar.

Despite political and economic upheaval, Ukraine is experiencing a new wave of creativity. It started after the 2014 Maidan Revolution that saw thousands of young Ukrainians demanding the freedom to express their ideas. Though not all of the goals of the revolution were achieved, society moved in a more democratic direction. The result? A boom of hip start-ups, food festivals, innovative theatres and open-air concerts. The past few years also saw a revival of local film production and the opening of cool, conceptual bars. This is but a small visible part of how the people of Ukraine have changed.

As for Ukraine’s fashion industry, it’s now one of the most powerful in the post-Soviet region, perhaps even in the whole of Eastern Europe. The first Ukrainian Fashion Week was held in 1997. In 2010 Mercedes-Benz Kiev Fashion Days, a second, alternative fashion week was founded. Both are doing great job of moving Ukrainian fashion forward, but in separate locations and with a different selection of labels.

Of course, there are also the designers who do not participate in fashion weeks, like Vita Kin – the woman who made fashion icons and celebrities like Florence Welch, Anna Dello Russo, Leandra Medine, Queen Máxima of the Netherlands, Giovanna Battaglia, Dita Von Teese and many others wear Ukraine’s national embroidered blouse, the vyshyvanka.

But let’s go back to fashion weeks, one of which has just wrapped in Kyiv. More than 50 well-known brands and newcomers showcased their spring/summer 2017 collections during the recent Ukrainian Fashion Week. Here are some of them.

Designers Olesya Kononova and Natalya Kamenska founded the label in 2008. Since then, the brand has undergone many changes, including a new member of the design team (Anastasia Ryabokon replaced Natalya Kamenska). The latest collection was the first created by the new duo and featured the label’s signature robe-dresses coupled with pantsuits, silk slip dresses and jumpsuits. Most of the looks were embellished with embroidery and beading or printed with original art by the designers. The collection also referenced Ukrainian national costume – specifically the corsetka, a reinvented vest. Lake’s version was made from homespun linen and decorated with embroidered beasts inspired by paintings of Ukrainian artist Dmitry Moldovanov.

This year Ukrainian brand Bevza celebrated its tenth anniversary with an extremely successful season abroad. International demand even forced designer and founder Svetlana Bevza to cancel her spring/summer 2017 show during Ukrainian Fashion Week at the last minute. Bevza popularized the “white dress concept” (a counterpoint to the ubiquitous LBD) and the entire design philosophy is centred around this shade.

The latest collection dug through the 10-year archives: jackets and pants done in a minimalist style, avant-garde coats and blouses, elegant tops and vests. And of course, the signature white dress was imagined in many iterations.

Is it possible to combine Marie Antoinette’s style with warrior costumes? With her latest collection, designer Lilia Litkovskaya said yes. One-leg pants, ruffled tops and blouses, translucent skirts and ornate dresses made up the collection. Another key reference for the spring/summer 2017 collection was the work of Italian artist and sculptor Lucio Fontana. His signature cuts and slits accompanied white dresses and wide-leg pants. Litkovskaya presented an exploration of Western European costume and the traditions of court dressing in her signature manner of bold shapes and refined tailoring.

The popularity of the post-Soviet aesthetic seen in the designs of Demna Gvasalia of Vetements and Gosha Rubchinskiy also touched the Ukrainian fashion industry. Many young Ukrainians remember the “poor-but-cool” ’90s, so it’s of little surprise that the “Vetements effect” on Kyiv’s fashion scene is strong. However, Artem Klimchuk digs deeper – and a few decades earlier. The name of his new collection is Bureau, inspired by classic Soviet cinema like the 1979 film Moscow Does Not Believe in Tears (a tale of hard work, adversity and love in, you guessed it, Moscow). Ultra-feminine wool dresses with extreme (but not provocative) necklines, coats decorated with embroidered carnations (another Soviet symbol) were presented on the runway. Even the models’ hair echoed typical ’60s hairstyles. One more lovely detail of ArtemKlimchuk’s collection: each look was affectionately named after a typical woman’s name like “Verochka”, “Ludochka” or “Ninochka.”

Frolov is the most rebellious label of the bunch and the latest collection challenged those who prefer conservative female silhouettes. The runway was a mix of corsets with hoodies, lurex with silk and denim with organza. Designer Ivan Frolov cited Sailor Moon and karaoke as his inspiration. The spring/summer 2017 collection also included robes, pyjama-style pants and underwear elements. It was typical of the brand, and in keeping with Frolov’s mantra of intelligent provocation.