Vancouver's first-of-its-kind fashion week kicks off on July 26 at the Queen Elizabeth Theatre. 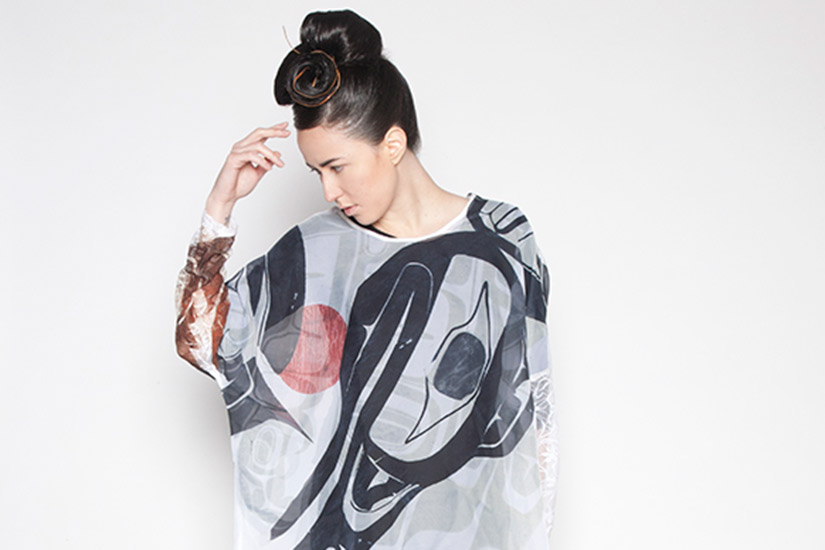 The debut Vancouver Indigenous Fashion Week will showcase collections of 40 Indigenous fashion designers from across Canada and people of First Nations, Métis and Inuit descent will model the clothes. The fashion week was founded by Joleen Mitton, who spent 17 years modelling for the likes of Kenzo and Vivienne Westwood. But when the Vancouver native (who is of Plains Cree, French and Scottish descent) came home to Canada, she decided raise the profile of Indigenous fashion, especially after seeing the culture and symbolism of First Nations people appropriated by the mainstream fashion world.

We spoke to Mitton about modelling in the pre-Instagram age, the Indigenous designers to watch and why Canada needs this one-of-a-kind fashion week.

Tell me about your start in fashion.

“I was discovered when I was 15 years old. I was in line for a free smoothie and a woman came up and tapped me on my shoulder and asked to take a photo. That was it. I went to Taiwan with Ford [modelling agency] and that’s how that all started. It wasn’t a choice at all, in a way. I spent a lot of time in Asia and it was a great experience, I got to see a lot. I lived in like Hong Kong, Taiwan, all over the place, and Ford booked me some pretty big names, but at the time I wasn’t super stoked about it.”

“I was a depressed teenager. And it was pretty obvious that you had to be a certain size to work overseas. The summer before I started modelling I had an eating disorder, even though I never thought about being a model. I was an athlete, I was strong, but I lost almost 30 pounds. And when you go into modelling it’s like, ‘they like you but they would love you if you lost five pounds.‘ That’s the darker side of the fashion world. I really appreciate the experience; it’s helped open my eyes to a global way of thinking. But I was young and impressionable. Being an Indigenous person modelling Asian stuff, I was like, ‘what’s going on?’ I was trying to figure out who I was in the world and then I’m being told not to eat and also, ‘could you look more Asian?’”

So what happened in between modelling and living in Asia and where you are now?

“I decided to come back and get into my culture. I started working for the Pacific Association of First Nations Women [a non-profit organization that hires only Indigenous women], helping families in need of resources like food banks and doctors. I hid my modelling past for four or five years. And then I started working with a girls group called Urban Butterflies, who are often in foster care and don’t get to grow up with their culture. And these girls were not listing off any Indigenous women they looked up to. Then I started working with older kids and once they found out I used to be a model, the idea of a fashion show came up. I thought if we started doing fashion shows I could teach them how to walk, and then they could learn how to present themselves and it would be easier to get a job. The fashion shows were a tool to get them to be confident and give visibility to young Indigenous men and women and the designers.”

Tell me about some of the designers participating at VIFW.

“Sho Sho Esquiro is an amazing designer. She’s dedicated to the murdered and missing women, and her previous collection was called “Worth Our Weight in Gold” and she was using 24-karat gold beads, and salmon skin, mother of pearl on an almost couture level. She’s shown in Paris and New York. Another designer is Pam Baker, she’s Squamish and she draws a lot of inspiration from her culture. And then there’s Jeneen Frei Njootli, she’s also an all-round artist, she does every type of art and a lot of Indigenous-inspired pieces.”

What’s the number one goal?

“Being visible is really important. Showing that you don’t have to go to a European designer to get something that’s already here. Instead of taking our stuff, why not buy it from people who live it and create it.”

Did you see a lot of cultural appropriation during your career?

“I would look at old photos of myself and I would realize that I was wearing some dream catcher. They were using elements [of our culture] to sell stuff. Some of those things are super sacred and not up for public consumption because there’s energy attached to certain types of clothing. In general respect needs to be a lot more practiced.”

Would you like to see this event happen every year?

“Yes, it would honestly help the visibility in Vancouver a lot. It’s art and you can sell art. Getting the arts and culture up in Canada would be amazing. I hope people will come out and enjoy and learn.”