How four Canadian designers are giving back. 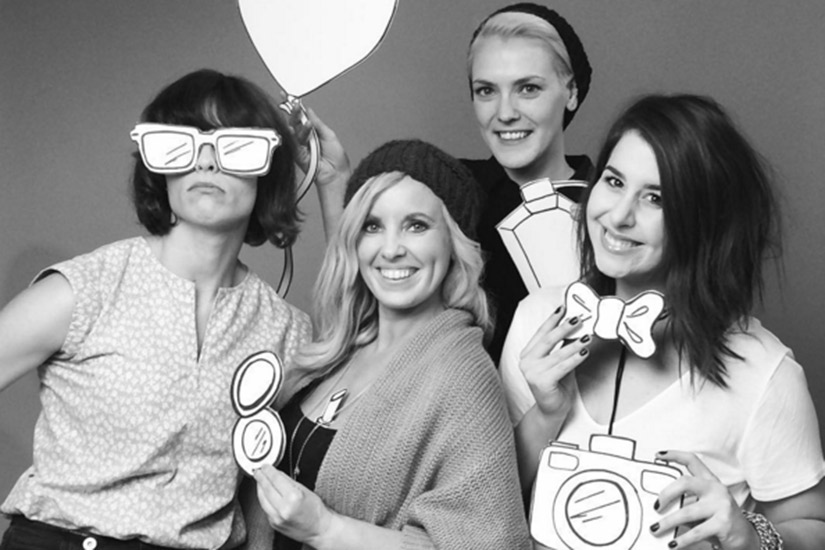 Saskatoon’s Helen Oro (Helen Oro Designs) and Devon Fiddler (SheNative) share a studio space where they incorporate their indigenous culture into their designs; Oro’s focus is on beadwork and T-shirts while Fiddler creates handbags and accessories. Having faced prejudice all their lives, Oro and Fiddler use their companies to give back to their community and empower indigenous women and girls.

On a cultural tradition

HO: “I was raised by my kokum – which means “grandma” – and she used to make her own moccasins and mukluks and do her own beadwork, so I saw it growing up. But I never really picked up on it back then; it’s something that I recently started teaching myself.”

DF: “What makes us unique is that we’re indigenous women integrating our traditions into a modern context and modern products.”

HO: “Traditionally, beadwork is used for regalia, but I wanted to do a more modern approach. I used to get a lot of people asking ‘Do you have be First Nations to wear this?’ But I want everyone to feel comfortable wearing it.”

HO: “There’s change happening in fashion design when it comes to indigenous designers, but there’s still a lot of cultural appropriation. It’s up to us to make that change. I bring my work with me and do it backstage and I talk about what I’m doing, about my beadwork – people just need to be educated.”

HO: “There are so many designers who say that they’re inspired by our First Nations culture, but what they’re not doing is learning more about what they’re inspired by. For example, the headdress – when it first started taking off on the runway, [designers] didn’t really know anything about it. They just saw it and went, ‘Oh, wow, this is beautiful. I want to make something like this.’ But there was really no history behind it, and then they offended people. Valentino working with Christi Belcourt – that was a perfect example of how to be inspired by culture and work with someone from that culture.”

DF: “I wanted to make an impact on the lives of indigenous women, so it didn’t really matter what I was creating – what mattered was what I was trying to do with the company.”

HO: “I work with a lot of girl-empowerment groups. I do a lot of confidence training and runway training in different areas in schools. Proceeds go towards various causes, like women’s shelters.”

DF: “For Saskatoon, fashion is based on prairie-made and prairie-looking products. I think that’s the difference between Saskatchewan fashion and the rest of the world – that’s where we have something different.”

HO: “Buying authentic, buying something where it’s actually made and sourced – that’s what we’re trying to do with our brands. We want to empower others and create opportunity for our community because there are so many talented people.”

HO: “I love designing, I love creating new things. I want to be the native version of Alexander McQueen! [Laughs] Crazy statement pieces that you wouldn’t see anywhere else but with an indigenous twist. I like to think outside the box when it comes to creating stuff.”

All new styles with a bohemian twist ? Launching this Friday, August 5 for OOAKF. #OOAKF #HillbergandBerk

Rachel Mielke started jewellery brand Hillberg & Berk – named for her great-grandmother Hilda Bergman and her dog Berkeley – in her Regina kitchen in 2007. Nine years later, the business is thriving, with five stores in Western Canada and more in the works for other parts of the country. Even the Queen is a fan.

On what they do best

“We’re known for our sparkle – necklaces, earrings, bracelets – pretty much all the jewellery we make has an element of sparkle to it. [The sparkle balls] are kind of the dress code of Saskatchewan, and they’re trickling into the rest of Canada as well.”

High-end but not high-priced

“People don’t realize when they walk in the store that everything is made in Saskatchewan. A lot of what we use is semi-precious gemstones, Austrian crystal, and it’s all sterling-silver based or has a gold or rose-gold coating on it. It’s high-quality jewellery that’s going to last. That’s our premise: We want to make pieces that you aren’t going to buy this season and then chuck out. But it’s reasonably priced, so it’s affordable luxury.”

“We were invited to design a brooch for the Queen a couple of years ago, which was such an incredible opportunity. It was presented to her and a couple of months later she wore it. She wore it again, and then she wore it again – she’s worn it four times, which is incredible. The Queen’s brooch was made out of Madagascar tourmaline, and after we gave her that piece we took the remainder and made a capsule collection. It sold out.”

“A big part of what makes our company different is our commitment to philanthropy – specifically, empowering women. So, it’s everything from our culture at H&B – taking women from the front lines of retail and moving them into the corporate side of our company – to giving back to charitable organizations. We’ve affiliated ourselves with Habitat for Humanity and Look Good Feel Better and universities across Canada, and we commit to donating 2.5 percent of our profits each year.”

On bringing back quality

“So much of our fashion and jewellery trends have gone towards fast fashion, and I think that’s wrong. There’s an up-and-coming consumer who demands a product that’s well made and ethically sourced and isn’t going to fall apart in a year or two. That’s what Hillberg & Berk is all about.”

Laurie Brown’s designs are usually “super dark and dramatic,” but her most recent collection is a frothy, pastel departure – and it’s beautiful. The Flin Flon, Man., native, who’s now based in Saskatoon, is mostly getting exposure via fashion shows and word of mouth, but is hoping to soon have her designs stocked in more stores.

“I’ve had my label for about six years, but I’ve been designing for about eight to 10 years. Usually for my collections, it starts with a textile and I pull off of that and make something of it.”

Artistry on the runway

“Most of my fashion shows are more of a theatrical performance; usually I have some gimmick. In the back of my mind, I’m thinking ‘How is this going to present? What kind of cool thing are we going to do this time?’ Like, with my most recent collection, the models all wore a paper outfit over the top and then tore it off and crumpled it up on the runway.”

“I always want to engage the crowd, get people excited and show a different part of it. So often there are people there, like models’ dads, who are just there to be supportive, but they get a little bored sometimes so I just want to excite people and get them thinking about fashion in a different way.”

On other local designers

“What’s different about Saskatoon is that everybody here really helps each other out. Like, if someone came to me and said ‘Can you make me a sweater?’ I’d be like, ‘No, Rebecca King is rockin’ awesome at sweaters, she specializes in that – go to her.’ Or if somebody wanted ’50s-style stuff, I’d send them to Melissa Squire. And people do the same for me. We support each other, help each other, and most of us are pretty good friends as well.”

“I had a model come over last night to borrow something, and she just gasped and hugged the whole rack. She was like ‘I want this and that and I want that…’ After the shows, the models often ask ‘Can I wear this out?’ And I’m like ‘Sure, just bring it back at the end of the night!’”